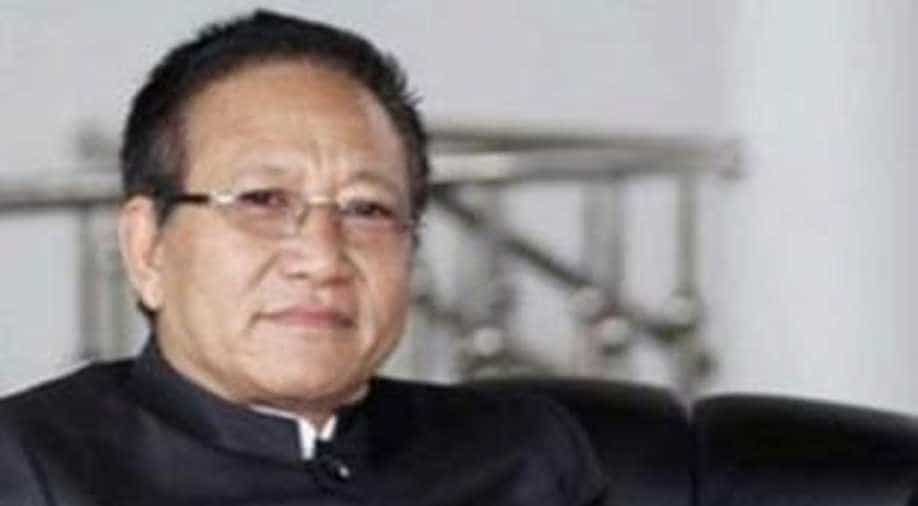 TR Zeliang resigned as chief minister in the wake of the protests after he announced 33% reservation to women in urban local bodies. Photograph:( ANI )

Nagaland Chief Minister TR Zeliang announced he is stepping down from office in the wake of the row over the representation for women in the urban local bodies in the state.

A statement from the Chief Minister's Office confirmed Zeliang was stepping down and a consensus leader will be chosen tomorrow morning at Naga People's Front (NPF) Legislature Party meeting, PTI reported.

A NPF source claimed that Neiphiu Rio, former chief minister and sole MP from the state, commanded the support of 49 MLAs in the 60-member Assembly. He said the 49 legislators included including eight Independents, while at least 3 including Speaker Chotisuh Sazo, are with party President Dr Shurhozelie Liezitsu.

The BJP has four MLAs in the state.

Nagaland has been on the boil ever since elections to urban local bodies in 12 towns across the state were conducted on February 1.

Nagaland tribal bodies had protested after the ULB elections with 33 per cent reservation for women were announced.

Following the protests and the outbreak of violence in the state, the entire process of elections was declared null and void by Nagaland Governor P B Acharya on February 9.

The second demand of suspending the personnel involved in January 31 police firing on the protesters leading to the killing of two youths in Dimapur has been partially fulfilled as they have been transferred.

Zeliang had left for Delhi on February 16 after seeking two days' time to step down from the chief ministerial post.

The NPF legislators, holed up in a resort in Assam's Kaziranga, had started leaving Kohima Friday night as Liezietsu was preparing to stake claim to replace Zeliang soon after the arrival of Governor P B Acharya from New Delhi.