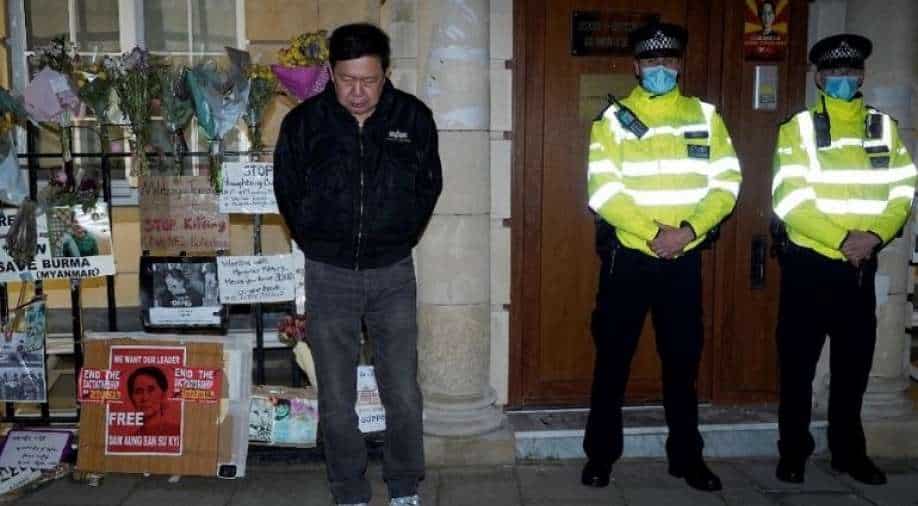 The ambassador, Kyaw Zwar Minn, said the defence attache had taken over the mission in "a kind of coup", an extraordinary diplomatic standoff that comes two months after the military seized power in Myanmar.

Myanmar’s ambassador to the UK Kyaw Zwar Minn has been locked out of its embassy in central London in what he called an "unacceptable" move following the military coup in his home country.

Protesters have left flowers and posters outside the embassy to commemorate the civilian victims of the coup.

Diplomats loyal to Myanmar's junta have seized the country's embassy in London, leaving the ambassador locked out in the street after he called for the release of ousted civilian leader Aung San Suu Kyi.

The ambassador, Kyaw Zwar Minn, said the defence attache had taken over the mission in "a kind of coup", an extraordinary diplomatic standoff that comes two months after the military seized power in Myanmar.

Daily protests demanding a return of democracy have rocked the country and brought a brutal response from the armed forces, with almost 600 civilians killed according to a local monitoring group.

The coup prompted several high-profile diplomatic defections, including the country's ambassador to the United Nations. The junta recalled Kyaw Zwar Minn last month after he issued a statement urging them to release Suu Kyi and deposed civilian President Win Myint.

Protesters gathered outside the mission with the ousted ambassador, who told the Daily Telegraph that "when I left the embassy, they stormed inside the embassy and took it."

"They said they received instruction from the capital, so they are not going to let me in," he added, calling on the British government to intervene. Asked who had taken over, he replied: "Defence attache, they occupy my embassy".

According to The Times newspaper, the ambassador said the defence attache had sought to install Chit Kin, his former deputy, as charge d'affaires.

Britain has been a strong critic of the coup, hitting the military with several sets of sanctions, and its foreign ministry said it was "seeking further information" about the embassy standoff. AFP has tried to contact Myanmar's military authorities for comment on the incident but has not yet received a response.