Mal?: Political hit jobs, drugs, robberies - the grime under the sun and sand 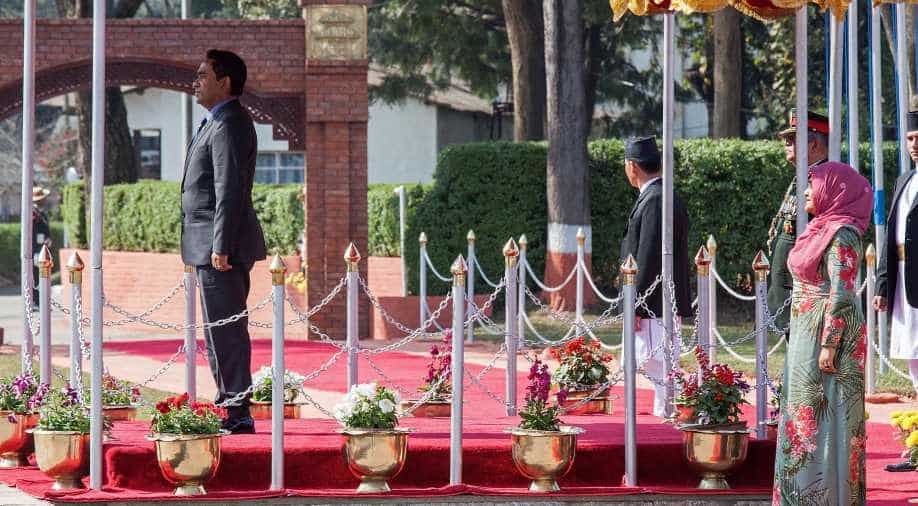 Abdulla Yameen, President of the Maldives listens to the National Anthem of his country upon his arrival for the 18th SAARC Summit. (Representative Image) Photograph:( Getty )

Almost 22 months ago, Maldivian journalist, Ahmed Rilwan, 28, disappeared in Mal?. He was last seen on a closed-circuit television camera while trying to buy a ferryboat ticket on his way home. His family still believes he will return one day, but his colleagues have a far more grim take on this. They believe Ahmed has been murdered.

A police chief inspector recently confirmed that he was in fact abducted on the same night from his apartment.

"The situation is very bad. The media is under attack from all fronts," said Zaheena Rasheed, editor of the online newspaper, The Maldives Independent, where Rilwan worked as a reporter.

For most travellers, Mal?, the capital city of the Maldives, is just a quick stopover on their way to dreamlike beaches and crystal blue waters. However, the dreamy landscape has a much more sinister side to it and Zaheena has good reason to be worried.

"I am very afraid. I myself have received death threats. I could disappear or I could be killed. My office has already been attacked. Other media offices have been burned to the ground," he fears are not unfounded.

The streets of Mal? are home to criminal gangs involved in drug dealing, robberies and violence on commission. A survey by the Asia Foundation, based on interactions with 130 gang affiliates, reports that there are "between 20 and 30 different gangs operating in Mal?, with 50 to 400 members in each group." This means that more than a thousand individuals are involved in such criminal activities in a city of 150,000.

Gang members are most likely to get away with it given the protection offered by the rich and influential. Even if some are caught they are able to get out of police stations without their crimes being brought to book. Escaping a gang is nearly impossible for a designated victim. Mal? is a small town on an island. Hiding is not really a viable option.

It is not only about the fear of gangs. The Maldivian media is facing an increasingly difficult situation. In April, a group of journalists was arrested for a day. They were part of a protest against a draft law aiming to reintroduce defamation as a crime that was abolished seven years ago. Just a month before, the Civil Court had halted the printing of Haveeru, the oldest and most widely-circulated Maldivian newspaper. An order issued against a three-decade old ownership dispute.

The turbulent situation took off in 2008, a turning point in the history of the archipelago. The human rights activist and environmentalist Mohamed Nasheed became the first democratically elected president of the country. His victory ended three decades of autocratic rule by Maumoon Abdul Gayoom who was the longest-serving politician in South Asia. Gayoom granted economic growth to the archipelago, but democracy paid a high price. One-party elections, politicians appointed only by the president, heavy restrictions on freedom of press, religion and dissent were the norm.

Nasheed's liberal agenda came as a break with the past. After decriminalising defamation, his government passed a bill to establish a Media Council "to preserve the freedom of media". He allowed foreign journalists to travel freely to the country and granted greater access to the local press. Minivan News, then the only local English online newspaper, could start working in the Maldives rather than in exile in Sri Lanka.

Young democracies, however, are often fragile, and so was Nasheed`s presidency. After less than three years, a police mutiny and weeks of protest staged by his opponents, he decided to resign – or was forced to do so "at  gunpoint".

In a contested run-off, Abdulla Yameen Abdul Gayoom, half-brother of the man who ruled for 30 years, became the new Maldivian President.

In 2015, events abruptly turned and Nasheed's situation plummeted. Following a trial that Amnesty International called "deeply flawed and politically motivated", the former president was sentenced to 13 years for terrorism. He was accused of arbitrarily removing the criminal court chief judge during his presidency.

Some Maldivians did not accept the verdict in silence and took to the streets in Mal?. The police arrested many protesters, including three reporters, who were covering the protest.

"There is a big crackdown on media freedom. It is very difficult for a person who is critical of the government to find any kind of work in the country," said Azra Naseem, a Maldivian research fellow at the Institute for International Conflict Resolution and Reconstruction in Dublin City University. "If you are not with the government there is no space for you in the Maldives."

He was authorised to leave his prison cell for a delicate surgery on the condition that he would return to jail once the treatment was done. However, that may not happen now. The British government has granted former president Nasheed political refugee status. A news welcomed by the media community and sections of Maldivian citizens who are not keen to toe the totalitarian line.

"Maldivians want to see better days. I am not alone and this is my home. I grew up in a dictatorship and I don't want to see my country regress into fear. I want to see a freer and more equal Maldives," Zaheena Rasheed said.