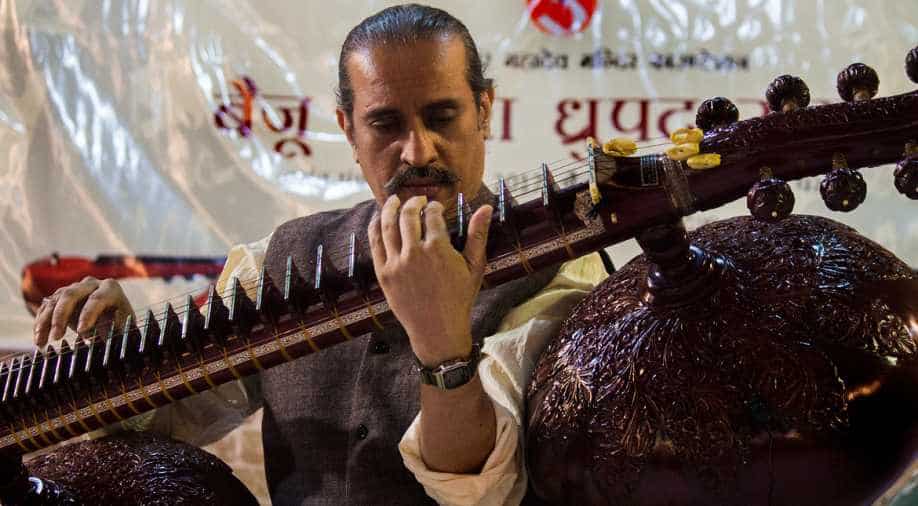 Amid the growing threats to artists and their work in many places around the world, a small town in Madhya Pradesh paid tribute to a forgotten musician. Chanderi, a historical town also famous for its hand-woven fabric, commemorated the mad creative genius of Pt Baijnath Mishra (Baiju Nayak) on his death anniversary on Basant Panchami. Popularly known as Baiju Bawra (madman), this sixteenth century Dhrupad musician is believed to have breathed his last in Chanderi. His purported shrine is located inside the Chanderi fort premises.

Interestingly, adjacent to his Samadhi lies the Jauhar Monument. One of the documented instances of Jauhar, self-immolation practiced by the women of royal and noble Hindu households in the face of defeat in battle, happened in Chanderi in 16th century. Medini Rao, an ally of Rana Sanga, was defeated by Babur’s army in 1528 following which the women and children committed Jauhar and men observed the ritual of saka, dressed in saffron garments.

The second edition of the Baiju Bawra Dhrupad Utsav, organised by Shri Achleshwar Mahadev Mandir Foundation of Dalla, Sonbhadra (Uttar Pradesh) began with Ustad Bahauddin Mohiuddin Dagar paying floral tribute at Baiju Bawra’s shrine. Ustad Bahauddin Dagar is a world-renowned player of the Rudra Veena. He represents the twentieth generation of the unbroken illustrious Dagarwani tradition. The event then moved to the quaint Bath House in the Raja Rani Mahal of Chanderi.

It began with a panel consisting of journalists, music critics and musicians discussing the role of art and music in society. Ustad Bahauddin Dagar opened the session with a presentation on experimentation in "veena". Dev Prakash Chaudhary raised concerns over the threat of consumerism faced by arts and music. Iqbal Rizwi spoke on religion and arts, and how the former ought to only serve the latter and not be in confrontation with it.

After the discussion Sanjeev Jha and Manish Kumar, Dhrupad vocalists of the Dagarwani tradition, enthralled the small yet engaged audience with their hour-long performance. The walls of the Bath House were then brought alive by Ustad Bahauddin Dagar’s performance of Raag Gangey Bhushani from the Carnatic tradition. It is to be noted that the Dagarwani musicians do not consider Hindustani and Carnatic musical traditions as isolated compartments. In the closing ceremony, Baiju Bawra Smriti Samman was bestowed upon Ustad Bahauddin Dagar.

Chandra Prakash Tiwari, secretary of Shri Achleshwar Mahadev Mandir Foundation, said that the decision of bringing a Dhrupad festival to Chanderi was a conscious one. “Why should classical music be confined to only Banaras, Calcutta, Lucknow and other obvious names? There is a need for the classical music forms to reach a wider audience.” Tiwari was nonplussed by the low turnout and shared that it was partly due to a big religious event happening in the city that day. “It is just a beginning. If people can sit till midnight listening to Dhrupad, they certainly care for it."

They are sure to spread the word and the festival will grow. Ustad Bahauddin Dagar said that it was an honour to play on Baiju Bawra’s death anniversary in a city he breathed his last. He shared that the award given to him was an even bigger honour. In a jocular vein he said, “There should be a time-bound accountability clause attached to such awards given to artists. If the artist does not act to further the art form in a period of five years, he should be stripped of the honour!”

Speaking on the attack on filmmaker Sanjay Leela Bhansali, whose upcoming film seeks to recreate the legend of a Jauhar committing Rajput queen, Padmavati, Ustad Bahauddin Dagar said that the artists should take a stand for their art. Those who have a problem with artistic expression should take legal recourse rather than resorting to hooliganism.

“Such controversies are created to extract monetary benefits many a time. This trend should be tackled sensibly.” He parted with a counter question, “You are asking me about threat to Bhansali’s art, but have you asked him about what ails Dhrupad and what he can do to redress that?”