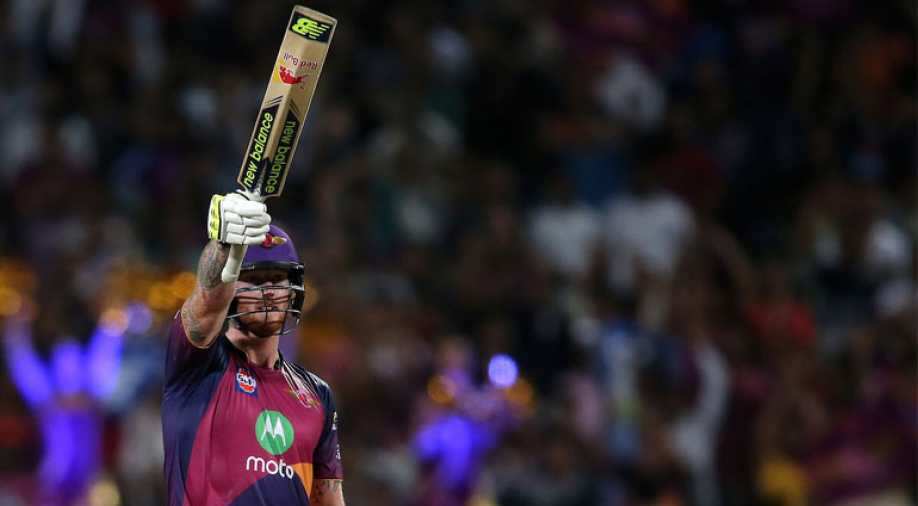 Ben Stokes braved cramps towards the end of the chase and batted with determination. Photograph:( Twitter )

Ben Stokes hammered an unbeaten 103 under pressure to lead Rising Pune Supergiant to a five-wicket win over Gujarat Lions that consolidated their fourth position in the IPL, here tonight.

Chasing a modest 162 to win, the hosts were reeling at 42 for four when the England batsman came out firing on all cylinders to ensure that the good job done by the bowlers does not go waste.

Stokes braved cramps towards the end of the chase and batted with determination to help RPS take two points and enhance their Play-offs chances.

Leg-spinner Imran Tahir had rocked the Lions' batting order with a three-wicket burst to help his side bundle out the rivals for a modest 161 in 19.5 overs.

The Lions were off to a flying start with Brendon McCullum (45) and Ishan Kishan (31) adding 55 quick runs for the first wicket but lost wickets in a heap to lose way.

Tahir not only broke the opening stand but also got rid of Aaron Finch (13) and Dwyane Smith (0) in successive balls. The South African spinner conceded 27 runs in his four overs.

Lions could not exploit a good batting wicket and if it was not for Dinesh Karthik's sensible 29-run knock, they would not have put on board a respectable total.

Left-arm paceman Pradeep Sangwan provided the Lions a perfect start by scalping dismissing both Ajinkya Rahane (4) and Steve Smith (4) in the very first over.

Soon it came 42 for four when Manoj Tiwary (0) was trapped by Basil Tahmpi and Rahul Tripathi (6) was run out.

From here, Stokes joined forces with MS Dhoni and the duo added 76 runs for the fifth-wicket to frustrate the Lions.

Stokes' onslaught began when he smashed Ravindra Jadeja for two sixes to collect 15 runs from the 10th over and never looked back. Dhoni played the second-fiddle as the former India captain was happy rotating the strike and finding a boundary here and there.

RPS needed 60 off the final five overs. Stokes creamed off 16 runs from Dwayne Smith's 16th over but Dhoni hit one straight to McCullum in the next over by Thampi.

Stokes, though, stayed till the end to take the side to finish line. His 103 came off 63 balls with seven fours and six sixes.

RPS now have 12 points from 10 matches to be in fourth spot while Lions are sixth with six points.

Earlier, Kishan took some time to get his eye in but made up for the dot balls by hitting a few big shots quite comfortably.

On the other end, McCulllum was on fire from the beginning, treating both spinners and pacers with disdain. Kishan lofted Jaydev Unadkat and Washington Sundar for sixes in the square leg region. Ben Stokes was introduced early into the attack but McCullum had no problems in finding boundaries.

Lions raced to fifty in the sixth over but leg-spinner Imran Tahir, who bowled the last over in PowerPlay, brought relief for the hosts by scalping Kishan.

Finch decided to take on Tahir and hammered him for a six over mid-wicket but the bowler had the last laugh as he caught and bowled the Australian. Tahir clean bowled Dwayne Smith with a googly in the next ball to stun the rival camp.

Lions had 94 runs on the board at half-way mark but had lost four key batsmen. McCullum was being troubled by Ben Stokes and was hit on the shoulder. The Kiwi was though dismissed by Shardul Thakur after miscuing one off paceman.
After that, James Faulkner (6) and Jadeja (19) too departed soon to leave Lions struggling.