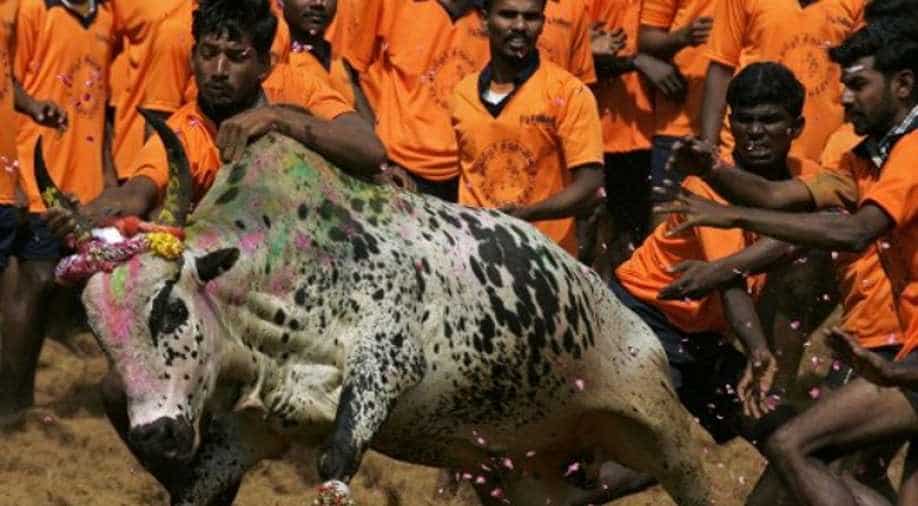 The harvest festival in India, Pongal, is the time when the bull-taming sport is played by the locals. IN photo: A snapshot of a bunch of youngsters participating in the outlawed sport in India's southern city of Madurai. Photograph:( AFP )

The Supreme Court today rejected a plea urging it to pass judgement on bull taming sport Jallikattu before the harvest festival of Pongal on Saturday.

A bench comprising justices Dipak Misra and R Banumathi told a group of lawyers, who requested for the verdict, that it is unfair to ask the bench to pass an order.

The apex court, however, said that the draft of judgement has been prepared but it was not possible to deliver it before Saturday when Jallikattu is to be organised.

The court had reserved its verdict on a batch of petitions challenging the federal government's notification allowing the sport.

The court had earlier questioned the federal government for its January 2016 notification allowing use of bulls in events like Jallikattu, saying that its 2014 verdict banning the use of the animals cannot be "negated".

Supporting the tradition, the Centre has said that it could ensure that bulls are not tortured or subjected to alcohol before the sport.

Earlier, the apex court had observed that the country cannot "import Roman gladiator-type sport" as it is against the culture of compassion towards animals.

The court in its 2014 judgement had said that bulls could not be used as performing animals, either for Jallikattu events or bullock-cart races in the states of Tamil Nadu, Maharashtra or elsewhere in the country, and had banned their use across the country.

The apex court had also dismissed the review petition against its 2014 verdict.

The apex court had also earlier declared Tamil Nadu Regulation of Jallikattu Act, 2009 as constitutionally void, being violative or Article 254(1) of the Constitution.

On January 8, last year the Centre had issued a notification lifting ban on Jallikattu in Tamil Nadu with certain restrictions, which was challenged in the apex court by Animal Welfare Board of India, People for Ethical Treatment of Animals (PETA) India, a Bangalore-based NGO and others.

On July 26, last year the apex court had said that just because the bull-taming sport of Jallikattu was a centuries-old tradition, it could not be justified.

It had said if the parties were able to convince the court that its earlier judgement was wrong, it might refer the matter to a larger bench.

The Supreme Court had on January 21, last year refused to re-examine its 2014 judgement banning use of bulls for Jallikattu events or bullock-cart races across the country.

The apex court had also stayed the January 8 notification of Centre.