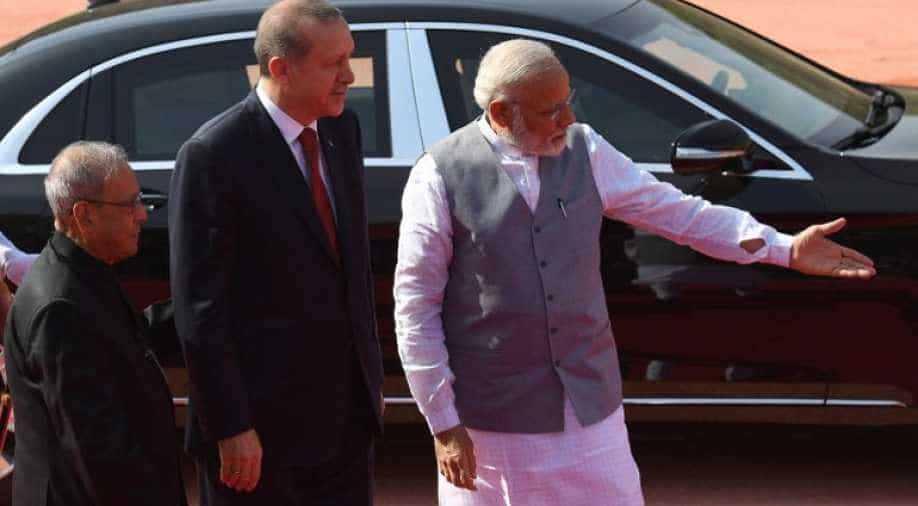 India and Turkey will hold talks on key bilateral and regional issues, including India's NSG membership bid ||This is Erdogan's first foreign visit after winning a controversial referendum on April 16 ||In an exclusive interview with WION, Erdogan had said that he backed India's claim to the NSG

Turkey is not directly opposed to India's NSG membership but has been maintaining that the powerful nuclear bloc should come out with a system to consider the entry of the countries which are not a signatory to the Nuclear Non-Proliferation Treaty (NPT), while also supporting Pakistan's case, diplomatic sources said.

Addressing an India-Turkey business summit on Monday, PM Modi said India and Turkey enjoy good economic ties, but noted that there was potential for more.

"India and Turkey enjoy good economic ties. The growth of bilateral trade over the years have been impressive. I understand that bilateral trade has increased remarkably since President Erdogan last visited India," Modi said.

"It was gone up from USD 2.8 billion in 2008 to 6.4 billion in 2016. While this is encouraging, the level of present economic and commercial relations is not enough against the real potential," he added.

"We are very objective and positive to the NSG process," Erdogan told WION.

"We remain engaged with Turkey," Ruchi Ghanashyam, secretary, external affairs ministry, told PTI when asked if the Indian side will raise the country's NSG bid during talks.

Ahead of President Erdogan's visit, India played down the proximity between Turkey and Pakistan as well as Ankara's statements on Jammu and Kashmir, saying the government is aware that Turkey has a very close relationship with Pakistan and it is their bilateral matter.

"We have always emphasised that India-Turkey relations stand on their own footing and, we believe, the Turkish side reciprocates our sentiment," Ruchi Ghanashyam said, adding that India's position on the state of Jammu and Kashmir is very well known that it is an integral part of the country.

However, she did not respond when asked if India will raise the issue.

President Erdogan earlier told WION that he hoped the Kashmir dispute could be settled "once and for all" through a multi-lateral dialogue and by keeping diplomatic channels open.

"We should not allow more casualties to occur and by strengthening multilateral dialogue, we can be involved, and through multilateral dialogue I think we have to seek out ways to settle this question once and for all, which will benefit both countries. I have been discussing these issues at length with my dear friend, the Prime Minister of Pakistan,
Nawaz Sharif. I know he is a good-intentioned man. I personally heard him speak about settling this issue once and for all. So if we keep dialogue channels open, we can settle it once and for all," the Turkish president told WION.

President Erdogan, who apart from his wife Ermine, will be accompanied by senior cabinet ministers and a 150-member business delegation hopes that his visit will improve India-Turkey relations.

This is President Erdogan's first foreign visit after winning a controversial referendum on April 16 that further consolidated his executive powers.

The two sides were also expected to discuss ways to strengthen cooperation in counter-terrorism during the presidential visit here.

After a failed coup in July last year to topple the president, Turkey had blamed Fethullah Gulen Terrorist Organisation (FETO) for it and said the outfit has "infiltrated" India.

Turkey had also asked India to take action against the organisation.