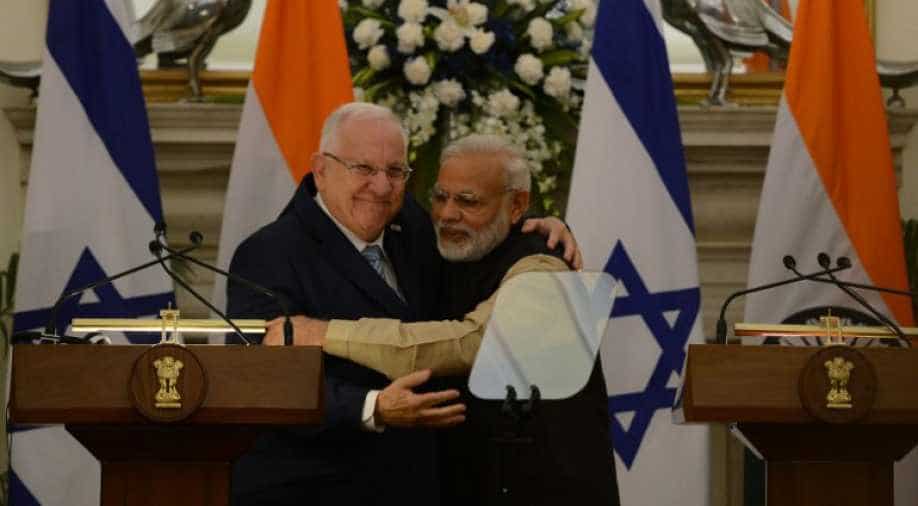 Israeli President Reuven Rivlin and India's PM Modi hug each other after in New Delhi on November 15. Photograph:( AFP )

India and Israel today agreed to bolster their already close defence partnership and to increase cooperation in combating "extremism and radicalisation", urging the international community to act tough against terror networks and states harbouring terrorists.

India's Prime Minister Narendra Modi and Israeli President Reuven Rivlin, who is on his first visit to India, also agreed to deepen their cooperation in the spheres of trade and investment, agriculture, water resources management and cyber crime, news agency PTI reported.

Rivlin, who is the first Israeli President to visit India in two decades, said his country is ready to "make in India and make with India". He also hoped Modi will visit Israel soon.

"We recognise that terrorism is a global challenge, knows no boundaries and has extensive links with other forms of organised crime," PM Modi told the press.

In an obvious reference to Pakistan, Modi said, "Regrettably, one of the countries of its origin and spread is in India's neighbourhood. "We agreed that the international community must act with resolve and determination against terror networks and States that harbour them. Failure to act and silence of speech only encourages the terrorists."

The Israeli president concurred, saying, "We stand together in defending our people and our values."

India is Israel's largest buyer of military hardware and has received various weapons systems, missiles and unmanned aerial vehicles from it over the last few years. However, transactions have largely remained behind the curtains.

PM Modi said both sides had agreed to make their defence partnership "more broad-based" through production and manufacturing partnerships and that Rivlin's visit had given a "crucial push" to efforts to further strengthen bilateral ties.

He also said the two sides agreed to prioritise "practical and specific engagement in the cyber domain."

Referring to Israel's expertise in micro-irrigation in drought-prone areas, the Prime Minister said and water management and conservation, and collaboration in scientific research were identified as areas for priority engagement.

"Make in India and make with India"

Modi said India was also grateful to Israel for its "clear support" to India's bid for permanent membership in a reformed UN Security Council.

The prime minister also spoke about the strong people-to-people ties between the two countries. He said the 2000-year old Jewish community in India represented a thriving link to this past and that the people were the "biggest strength and the biggest beneficiaries" of the strong Indo-Israel partnership.

"Two-and-a-half decades of our friendship has brought rich dividends for both our nations. It has also strengthened voices of peace, stability and democracy globally. Your visit provides an opportunity to break new ground and shape new contours of our partnership," Modi said.

Modi may visit Tel Aviv in first part of 2017 which will be 25th year of formal diplomatic ties between the two countries, PTI reported.

Though it had recognised Israel in 1950, India established full diplomatic relations with the country in 1992.

"As we approach this big milestone, we are both committed to advance our engagement on several fronts. And, build on convergences and commonalities in our interests and concerns on regional and global issues," Modi said.

Rivlin, who arrived here yesterday, was given a ceremonial reception at the President House (Rashtrapati Bhavan) earlier in the day. He also visited Raj Ghat and paid tribute to Mahatma Gandhi.