Has Islamophobia become a political tool? 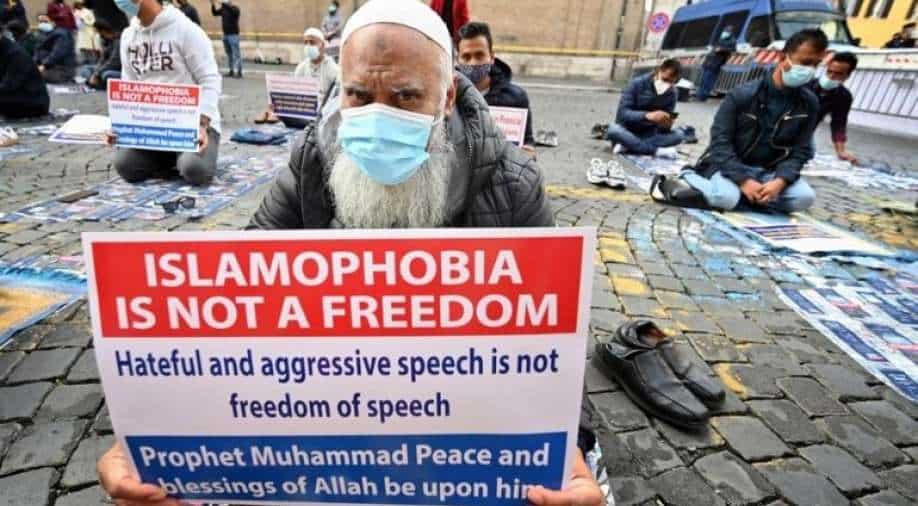 Muslim faithfuls hold placards as they pray during a gathering on October 30, 2020 in central Rome called against islamophobia and for boycotting France amid anger in the Islamic world over French President's defence of the right to publish cartoons seen as offencive to Islam Photograph:( AFP )

Pakistan Prime Minister Imran Khan said that the vilification of Islamic precepts and religious personalities, wrongly justified under the garb of the right to freedom of expression or opinion, hurts the sentiments of 1.5 billion Muslims around the world

Pakistan's Prime Minister Imran Khan on Tuesday requested the Organisation of Islamic Cooperation (OIC) to vehemently counter Islamophobia and the false equation of Islam with radicalisation and terrorism.

Islamophobia exists just like anti-semitism. However, it has become a political tool to silence the critics of Islam. Criticism of any religion is not the same as discrimination against its followers.

The Pakistan government has decided that there would be no compromise on the country's controversial blasphemy law, days after the European Parliament adopted a resolution calling for a review of Islamabad eligibility for the General Scheme of Preferences Plus (GSP+) status in wake of an "alarming" increase in the use of blasphemy accusations in the country.

Prime Minister Imran Khan said that the vilification of Islamic precepts and religious personalities, wrongly justified under the garb of the right to freedom of expression or opinion, hurts the sentiments of 1.5 billion Muslims around the world.

However, Pakistan fails to question its ''all-weather friend'' China on its exploitation of Uighur Muslims in concentration camps.

The European Parliament, in its latest session on Thursday, adopted a resolution demanding Pakistan to allow space for religious freedom and urged the EU authorities to review GSP plus status for Pakistan amid the increasing number of blasphemy cases.

Pakistan's blasphemy laws, both in content and application, are contrary to Pakistan's human rights obligations to respect and protect the right to life, freedom of thought, conscience and religion or belief, freedom of opinion and expression, equality before the law, prohibition of discrimination and the right to life.

While Imran Khan claims that Pakistan's initiatives are aimed at mutual understanding and promoting inter-faith harmony, nurses in his country are forcing their Christian colleagues for religious conversion.

Imran Khan had hoped a fight over cartoons of the Prophet Mohammed would result in an easy win, placating the ultra-conservative quarters at home while being hailed as a defender of Islam abroad. The gamble seems to have backfired spectacularly.

For the past weeks, riots have again engulfed Pakistan, with police officers killed and taken hostage, and the French embassy taking the "urgent" step of advising its citizens to leave the country.

Khan scrambled to keep order, months after launching a war of words with President Emmanuel Macron following the French leader's defence of the magazine Charlie Hebdo's right to republish images of Mohammed, an act deemed blasphemous by many Muslims.

But rather than appease the religious right, Khan's grievance appeared only to have encouraged the extremists, with the radical Tehreek-e-Labbaik Pakistan (TLP), the Movement at the Service of the Prophet, calling for the expulsion of the French ambassador.

The violence only ended after Khan's government allegedly agreed to a deal with the TLP that would see the French ambassador booted out after receiving parliamentary approval.