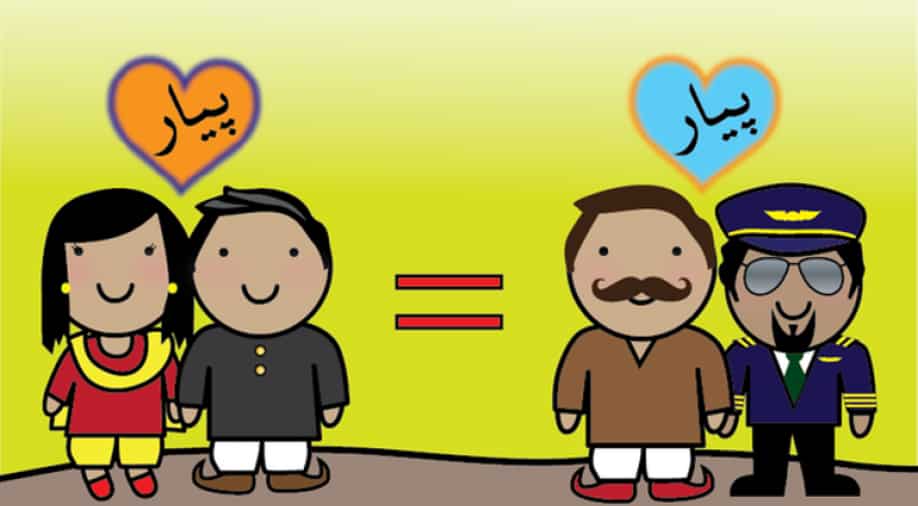 "I’m Gay and I’m Pakistani – deal with it," reads the brief Twitter description under the image of a smiling and whiskered man. He is Chacha, uncle of Ahmed, a young boy living in the bustling city of Karachi.

Well, Chacha is not a real person. There is no flesh and blood. He is inked on paper, the main character of “My Chacha is Gay”, a comic book. The book tells the story of a homosexual man as seen through the eyes of his nephew.

Little Ahmed knows his uncle is gay but he can't understand why people are so fussed about it. His uncle is fun

Ahmed knows his uncle is gay. He does not understand why people are fussed about it. Chacha is his uncle and he is fun. The uncle and nephew love ice cream, go for camel rides on the beach and enjoy flying kites. Pretty much the same as the boy next door’s uncle. Ahmed has met Uncle Faheem, Chacha’s boyfriend. He likes him. Uncle Faheem is a pilot, a real one, with fatigues and proper aviator goggles. Sometimes Faheem lets Ahmed wear his official hat. It fills the young lad with excitement. Maybe, one day, Ahmed will also gain entry into a real cockpit.

The images are simple and the communication clear. There is a calm and happy atmosphere. Serenity may be a powerful instrument to tackle homophobia. The book has few written words but they deliver a strong and unequivocal message: love matters and not who you love.

Pakistani-Canadian blogger and illustrator Eiynah is the creator of the book. Her twitter profile @NiceMangos states that she writes about sex, religion and apostasy. She said to feminisminindia.com that she chose the nickname because mangoes are often used in Pakistan as a synonym for breasts. Her position is clear and provocative: She is a "critic of Islam who loathes anti-Muslim bigots".

Eiynah is, of course, not her real name. For her, anonymity was a matter of necessity than one of choice. Reaching her directly is a tough task. She does not share her personal number or address. E-mails are the only way to reach her. She explains in an email interview with WION, "I get a lot of threats for my work. So, I remain anonymous and therefore don't share personal contact details." Facebook suspended her account because she was using a nom de plume to protect her identity.

"My Chacha Is Gay was something I had been planning for a long time. Homosexuality comes up often, especially with regards to Pakistani culture and lack of acceptance," writes the author. Same-sex relationships are a punishable offence in Pakistan. It can lead to imprisonment for a minimum of two years to a maximum of ten years. This law dates back to 1860. It was written during the British colonial rule. While the British left Pakistan in 1947, many of the laws did not.

Chacha generated instant public interest and acceptance. Crowdfunding it was an easy task. Popularity comes at a price, though. Being Pakistani and writing about homosexuality touches the raw nerves of a generally conservative society. "I received many rape and death threats, for writing this book alone, along with my other projects as well," tells the author.

Spreading the book around the country is a tall order. The first version of the comic book was published in English but Eiynah decided to break linguistic barriers. Uncle Chacha started speaking Russian, Hebrew, Italian, Arabic, Spanish, German and, most importantly, Urdu, the official language of Pakistan. The translated versions are currently only available online. Eiynah says, "There is sadly no real market for a printed Urdu version of a book that teaches homophobia is not okay since it is unfortunately still not accepted in much of the country.”

The largest Pakistani book retailer initially showed some interest in her comic book but then nothing happened. It refused to have "My Chacha Is Gay" on its shelves as the book was too controversial. The book is also not available on the retailer’s online shopping page. The purchase officer at the retailer says that he does not know anything about this comic book.

Eiynah belongs to the progressive section of the Pakistani society which dreams of a country free from religious fanaticism. People like her want a country where citizens can speak freely and publicly about every issue. Chacha, that way, is more than just a cartoon character. He is Eiynah’s voice which is trying to bring to the world another picture of Pakistan, far from the common narrative of terrorism and violence.