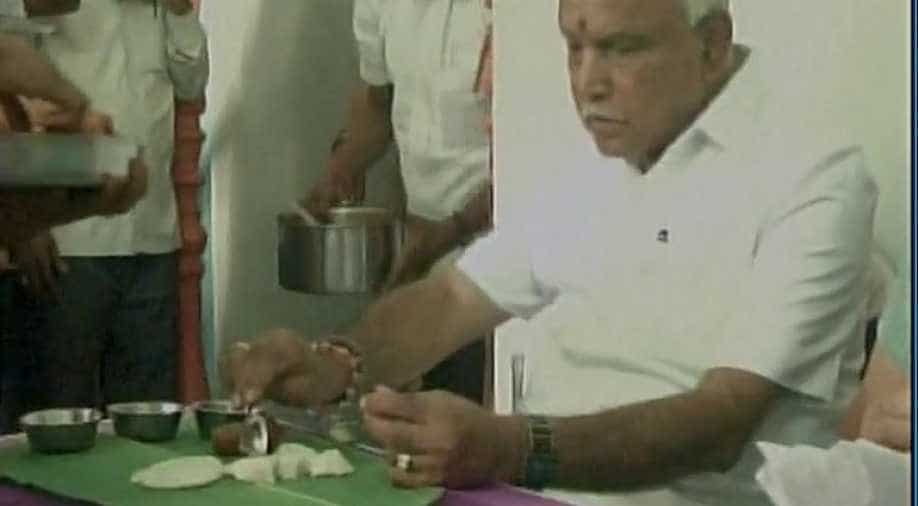 The Karnataka BJP chief ate idlis?ordered?from a nearby hotel?rather than the food prepared by the family. Photograph:( ANI )

The former chief minister ate idlis?ordered?from a nearby hotel?rather than the food prepared by the Dalit family

Karnataka State Bharatiya Janata Party (BJP) chief B S Yeddyurappa is once again amidst a brewing controversy over claims of promoting untouchability, as he had a meal at a Dalit`s home that was allegedly prepared and brought to him from a nearby hotel.

During his visit to Tumakuru district on Friday, the former chief minister who was accompanied by other party members visited the residence of a Dalit family where he allegedly ate `idlis` from a nearby hotel and not the food prepared by the family.

Claiming his act would spark off negativity in the community, a young man from the family lodged a complaint with the police.

Dismissing claims of disrespecting the family, a BJP spokesperson painted the allegations as a political move, adding that those who raised the issue must immediately apologise to the family.

Yeddyurappa received flak over a similar situation earlier in Tumakuru where he was photographed eating "thatte idli" at a Dalit`s house at Gubbi.