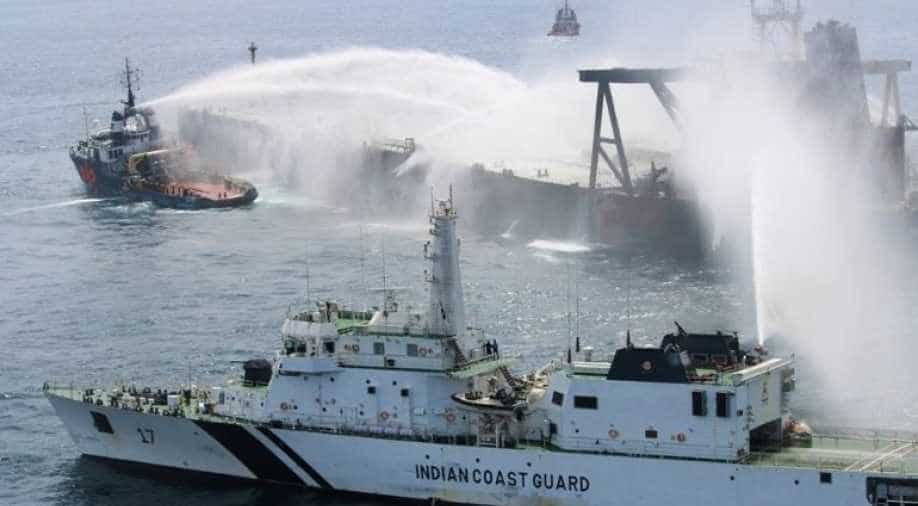 The fire which had re-ignited Monday, on-board a very large crude carrier (VLCC) MT New Diamond off the Sri Lanka coast has been doused and boundary cooling is being done to prevent re-ignition

The fire which had re-ignited Monday, on-board a very large crude carrier (VLCC) MT New Diamond off the Sri Lanka coast has been doused and boundary cooling is being done to prevent re-ignition. The fire had almost risen to a height of upto 60 meters from the main, weather-exposed deck of the ship, which is also known as the weather deck. However, the Indian Coast Guard (ICG) has said that the blaze has been visibly doused and that measures are being undertaken to prevent re-ignition.

Sustained firefighting efforts by ICG Ships Sujay, Shaurya, Sarang, specialised ICG Pollution Response Vessel Samudra Paheredar along with Sri Lankan Ships and tugs ensured the intensity and magnitude of fire was reduced considerably by Tuesday morning. The master of MT New Diamond, on-board ICGS Shaurya has also intimated the Coast Guard that the fire appears to have been doused. The situation is being monitored closely and boundary cooling with sea water and application of foam has been enhanced to avoid re-ignition.

The MT New Diamond is being held about 30 miles from the Sri Lankan Coast by a tug boat and join firefighting and pollution response operations are being carries out by the assets of the Indian Coast Guard, the Indian Navy and their Sri Lankan counterparts. 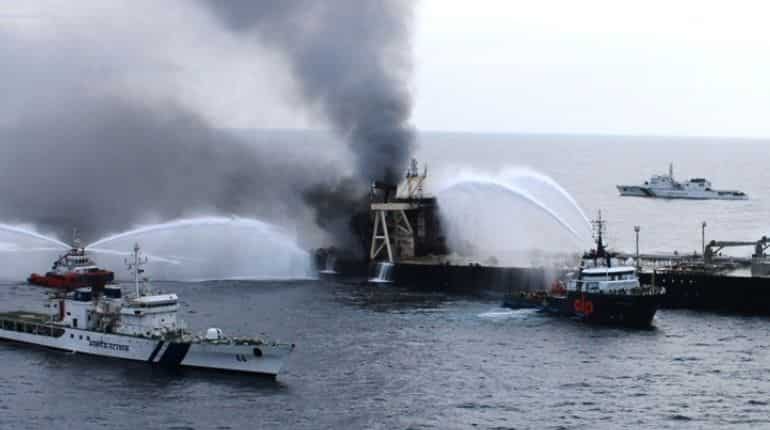 Owing to the use of large quantities of water and other suppressants to control the fire, it is said that the rear portion of the ship (aft) has gone down into the water by about 3 feet. However, there is no significant tilt(list) in the ship caused by the same.

The ICG vessels have been deployed for fire-fighting and consequential pollution response for MT New Diamond off since September 3rd. A bilateral MoU between ICG and SLCG covers co-operation in the Marine pollution Response domain. The Indian Coast Guard is also the Competent National Authority under South Asian Co-operative for Environment Protection (SACEP) for responding and coordinating pollution response in South Asian Sea region.

In order to supplement the surface firefighting efforts with aerial dropping, the Lankan Navy had requested the Indian Coast guard for Dry Chemical Powder (DCP). To facilitate this, ICGS Abheek with 1.5tons of DCP was diverted from on-scene to enter Trincomalee harbour for the handing over. ICG Dornier aircraft  with 700 kgs DCP was also dispatched on Thursday morning from Chennai to Trincomalee.

An ICG Dornier aircraft continues to operate from Mattala, Sri Lanka besides CG Helicopter embarked on  ICGS Sarang being launched regularly for aerial assessment. No oil spill has been reported so far.

A 16-member salvage team including Marine Chemists and Naval Architects who are onboard Tugboats on-location  are in agreement with the methodology adopted by ICG to fight fire and are providing suggestions to make the firefighting more effective.

This very large crude carrier- MT New Diamond is a Greek owned vessel, under charter by Indian Oil Cooperation. The vessel has been ablaze following a major explosion in the engine room, while transiting Sri Lanka’s Exclusive Economic Zone. The first information about the vessel being on fire was received at Indian Coast Guard Maritime Rescue Co-Ordination Centre (MRCC) Mumbai.