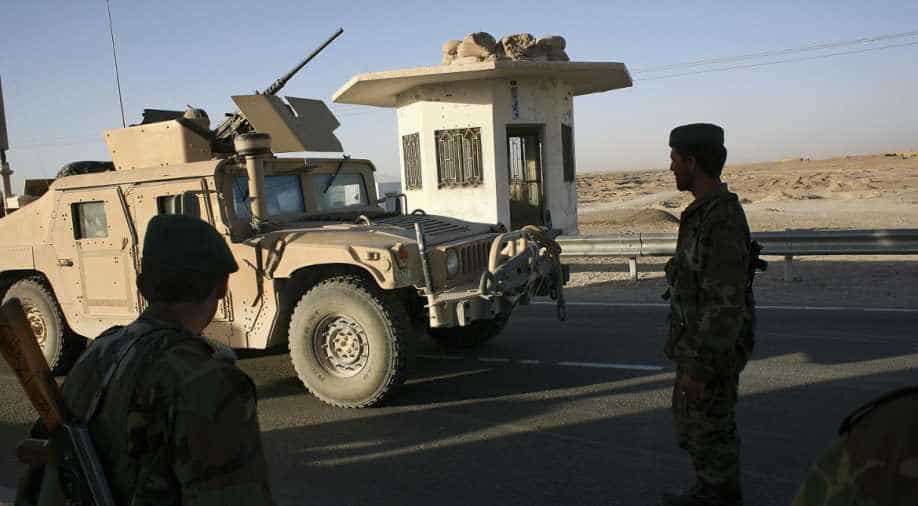 Kidnappings and murders by the Taliban have increased since the NATO-backed strategy to reduce check points on Afghan highways was introduced. Photograph:( Getty )

A series of kidnappings and murders on Afghanistan's highways has some officials and travellers questioning the North Atlantic Treaty Organisation (NATO)-backed strategy that reduces security check posts in order to free up police and soldiers to go after the Taliban.

Since the end of May, more than 200 people have been reported kidnapped and at least 21 murdered in northern and eastern Afghanistan.

Roads have long been dangerous in the war-torn country, as the Taliban insurgency and other Islamist militant groups have expanded their reach.

But the spike in abductions and killings, widely blamed on the Taliban, comes a few months after the NATO-led international mission encouraged Afghan security forces to close many smaller checkpoints.

In late May, the Taliban also named a new leader, although it is not clear if they have changed tactics to go after softer targets.

Defence ministry spokesman Mohammad Radmanish said measures were being taken to make travel safer. The vast majority of Afghan individuals and businesses have to use roads, because flights are either unavailable or unaffordable to them.

"Kidnapping of innocent people, which is a new tactic by the Taliban, is a concern for us," said Radmanish. "We have increased the number of patrols and bases on major highways during the day time."

The move to staff fewer checkpoints was aimed at reducing casualties among security forces as well as bolstering offensive operations, and the coalition says it still supports the policy.

"The reduction of checkpoints has actually allowed the Afghan Security Forces to respond more quickly to enemy activity and move from a defensive mindset to one that's more offensive in nature," coalition spokesman Brigadier General Charles Cleveland said.

The road attacks against civilians, however, have taken Afghan officials by surprise, and the government is reviewing the policy, said one senior Afghan military official, who spoke on condition of anonymity.

Cleveland said he was optimistic Afghan security forces would be able to better secure transportation routes.

Bus drivers and passengers described a growing sense of fear, despite government efforts to stop the attacks.

"The Taliban are everywhere and take hostages whenever they want to," said bus driver Nasrullah, who travels between the capital Kabul and Kunduz in the north and uses one name.

"Some passengers are so afraid (that they) keep talking to family members on the phone, sometimes the whole journey."

Ghazni province, where 12 people were killed and nearly 50 kidnapped in road attacks on Wednesday, lies astride the vital highway from Kabul to Kandahar in the south.

Soldiers still try to patrol the route during the day, but with many checkpoints closed they only provide a temporary presence, said Hanif Rezaee, spokesman for the army in Ghazni.

"There are still small checkpoints, but at the end of the day, the soldiers move back to their bases," he said. "It is very difficult for us to provide 24 hour patrolling."

Security officials said the Taliban's ploy may be to expose the government's weakness outside major urban centres.

"By kidnapping passengers, the Taliban are trying to provoke people against the government, showing that it can't provide security," said Mohammad Qasim Jangalbagh, police chief of Kunduz, where security forces have rescued at least 140 hostages kidnapped in May.

Sediq Sediqqi, spokesman for the Afghan interior ministry, said the government was re-examining its highway security strategy in light of recent attacks.

Asked why road attacks had increased markedly, he replied: "The Taliban had high expectations when they started their spring offensive, but since then Afghan forces have hit them hard, and killed hundreds of their commanders and shadow governors.

"Now the Taliban want revenge or to compensate (by attacking) innocent people."

The Taliban have not claimed all recent road attacks, and a spokesman was not immediately available to comment.

Insurgents are not the only ones profiting from lawlessness, according to bus driver Mohammed Shir, who travels between Kabul and Mazar-i-Sharif, another northern city.

"There are always Taliban stopping cars and searching," he said. "Sometimes they are thieves and only want your belongings. Such incidents happen more often from evening till dawn when there are no government security forces."

The number of bus passengers has dropped sharply, and those who can afford it are opting for air travel, said Mohammed Zakaria, who runs a bus company in Mazar-i-Sharif.

Those who cannot go by air increasingly travel only during the day.

Off-duty members of the security forces are frequently targeted by militants.

When Sher Baz, a police officer based in Ghazni, travels to Kabul to see his family, he often hides his identification card to avoid being targeted should he be stopped.

"It is a very difficult journey, but I have to make it because there is no direct flight," he said.