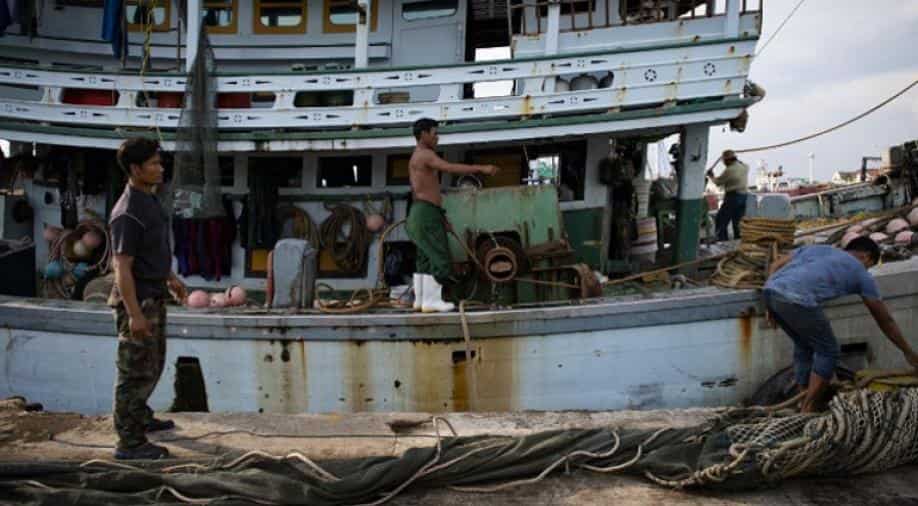 Migrant labour -- much of it from Myanmar -- has propped up Thailand's economy for years, with foreigners working everywhere from factories to fishing boats, part of a global chain to produce standard supermarket items such as frozen shrimps, ready meals and pet food.

A "mafia" of recruitment agents is trapping Myanmar migrants to Thailand in debt bondage despite a 2017 law meant to fight exploitation in the kingdom's notoriously shadowy job market, activists and workers say.

Migrant labour -- much of it from Myanmar -- has propped up Thailand's economy for years, with foreigners working everywhere from factories to fishing boats, part of a global chain to produce standard supermarket items such as frozen shrimps, ready meals and pet food.

After allegations of slave labour and trafficking prompted the European Union to threaten a ban on Thai products in 2015, the kingdom's ruling junta has scrambled to clean up industries reliant on a migrant workforce.

The new law that came into force in July last year was meant to crack down on a shady recruitment process, which left desperate migrants vulnerable to corrupt brokers and exploitative companies.

But more than a year later, foreign workers and labour experts say a lack of enforcement and government oversight means migrants are no safer, often shelling out hundreds of dollars in inflated fees to agents and ending up in debt even before they even secure a job.

Although the legislation says Myanmar migrants should pay no more than 150,000 kyat ($100) in fees to agents, many end up paying up to $800, a colossal sum for low-paid workers from one of the most impoverished countries in the world.

"The agents took advantage of us," said 40-year-old Ma Oo, who had to pay $400 for a job in an electronics factory near Bangkok and was visibly scared to speak out.

Thai firms usually hire local agents to scout workers from neighbouring Cambodia, Laos and Myanmar, although the latter is by far the largest source for labour, with more than two million migrants working in Thailand.

But in many cases, Thai agents then auction off the jobs to the highest bidder among their Myanmar peers clamouring for business in a highly-competitive market, activists say.

The Myanmar brokers -- or their sub-agents -- scour rural villages for workers and transfer all the extra costs to them, leaving migrants trapped in "debt bondage" as they struggle to pay the exorbitant fees, says migrant labour specialist Andy Hall.

Thai and Myanmar agents collaborate as "a real mafia that makes a lot of money on the backs of migrant workers", explains Aung Kyaw, president of the Migrant Workers Rights Network in Thailand, which acts as a de facto union.

The situation is even worse, he says, for the several hundred thousand Myanmar migrants working unregistered, who are even more vulnerable.

In one ongoing case, a family -- including two children -- was trafficked into the kingdom and forced into slavery on a fishing boat, beaten, unpaid and their documents confiscated.

Thai authorities insist that they maintain strict oversight of the country's agents and threaten them with stiff penalties if they do not respect the law.

If there are problems, "they may be on the side of the Burmese recruiters", Anurak Tossarat from the Ministry of Labour told AFP.

But agents in Myanmar blame their Thai peers for stoking the illegal trade and demanding kickbacks in exchange for jobs.

"(We) have to fight to get job offers from Thai agencies. The more money you give them, the more offers your agency gets," an agent in Yangon told AFP on condition of anonymity.

"They are bullying us."

Campaigners urge tighter scrutiny by officials in both countries and up the supply chain to the multinational buyers of Thai produce to bring an end to the exploitative practices.

Britain's biggest retailer Tesco, food giant Nestle and chocolate maker Mars -- which all source products in Thailand -- told AFP they were working with local partners to improve practices, vowing to probe any allegations of wrongdoing.

Despite the extortionate fees and the threat of debt, each month around 15,000 people from Myanmar cross into Thailand to take up jobs.

In a Yangon teashop, Kyaw Naing, 24, said he had already handed over a thick wad of cash to an agent who had promised him work.

"I had to borrow money from my family with interest but I will pay it back if my job is good," he says, adding that the agent assured him Thailand's new law means he will now be "more secure".