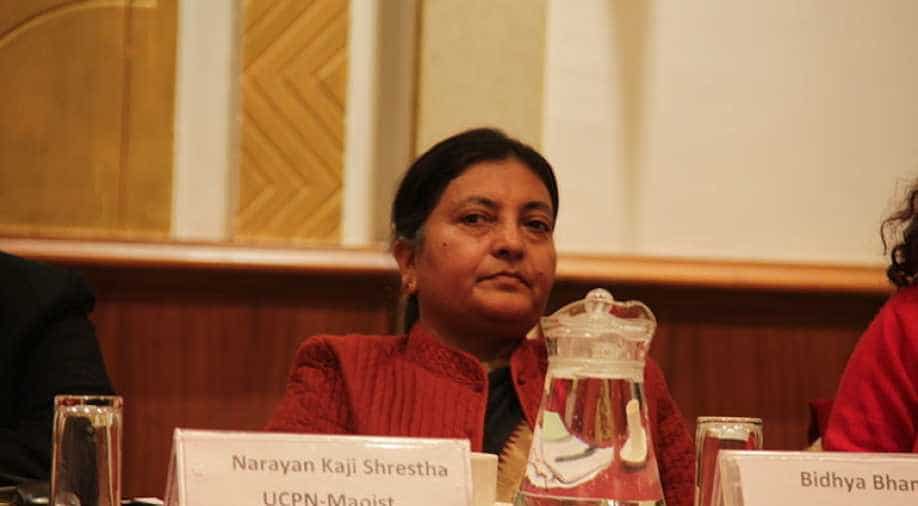 President Bhandari has called upon the political parties representing the Legislative Parliament to elect a new Prime Minister. (Wikimedia Commons) Photograph:( Others )

Bidya Devi Bhandari asked parties to elect a new PM through consensus, a day after Prachanda resigned from the post ||The President asked Prachanda to continue as caretaker PM till his successor is elected ||Prachanda resigned to honour a power-sharing deal with ruling coalition partner, Nepali Congress

Nepalese President Bidya Devi Bhandari on Thursday called all political parties to elect a new Prime Minister within seven days through consensus, a day after Prachanda resigned from the post.

President Bhandari accepted Prachanda's resignation and asked him to continue as caretaker Prime Minister till his successor is elected.

The President has called upon the political parties representing the Legislative Parliament to elect a new Prime Minister and form a council of ministers under his or her leadership, said a notice issued by the Nepalese President's office.

'Prachanda' resigned to honour a power-sharing deal with ruling coalition partner, Nepali Congress, to hand over the country's leadership to the largest party in Parliament.

His resignation clears the way for his former political rival and Nepali Congress president, Sher Bahadur Deuba, who is expected to take over as the prime minister.

Deuba's appointment is likely to be confirmed in a parliamentary vote within the next 10 days.

The Nepali Congress, the largest party in Parliament and constituents of the United Democratic Madhesi Front, the Federal Alliance, and some other parties had helped Prachanda in securing 363 votes in the 595-member House to form the government comfortably in 2016.

During the formation of the government, the chairman of CPN (Maoist Centre) had reached an understanding with Deuba that he will step down as prime minister and hand over the leadership to the Nepali Congress after nine months.

The pact was to run the government on a rotational basis until elections to the parliament are held in February 2018.