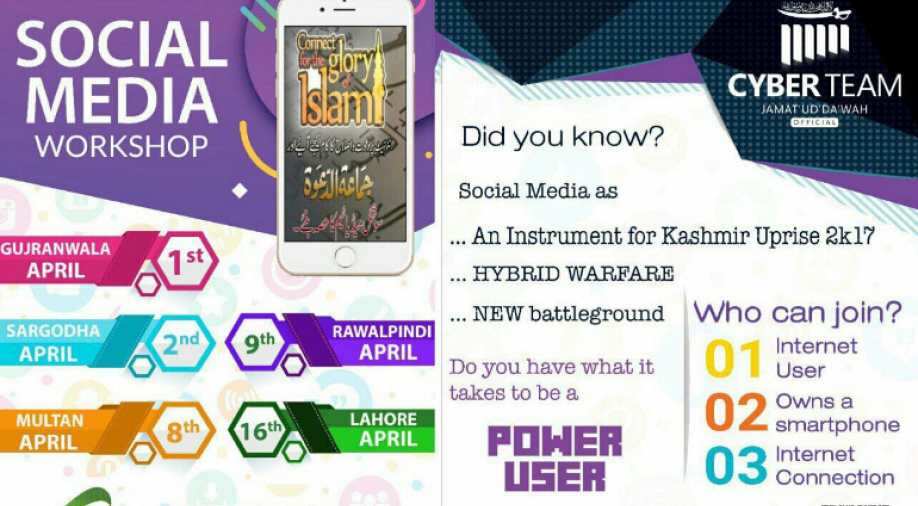 It also clearly states that the current workshops are only focused on the year 2017 indicating that every year terror organisations based in Pakistan would use social media platforms differently. Photograph:(WION)
Follow Us

With setting in of summer and melting of the snow, Pakistan has upped its game on social media to instigate the civil society in the valley of Kashmir against the state government and security forces.

Apart from laying importance on physical attacks on public property and damage to the security forces, there is a renewed attempt to use cyberspace to mobilise public opinion against the Indian Army. It’s one of the many which do rounds in the valley of Kashmir but looking at it points out at the sophistication anti-India cyber operation.

A social media publicity material in possession of WION is one such example of it. The publicity material clearly states the days and the dates of social media workshops in different parts of Pakistan to organise cyber warfare against India. Not only does it inform them of the time but numbers are available which are working and can be used to take quick notes if internet connection is slow. The most important is its message that the only thing required to wage cyber war in Kashmir is a phone and internet connection. It also clearly states that the current workshops are only focused on the year 2017 indicating that every year terror organisations based in Pakistan would use social media platforms differently.

WION spoke to Arun Chaudhary, a retired Intelligence Bureau officer who headed the Kashmir division on this matter. He is of the view that social media is being increasingly used to organize people in the valley and its power should not be underestimated.

The best example is that of recent phenomena of quick mobilisation of people against security forces right during an operation to pelt stones against the security forces. “Reach of social media in Kashmir is huge. I should be understood that Pakistan continues to heavily invest in technology to ensure that their assets remain safe inside the valley,” said Arun Chaudhary.

The political establishment continues to be tense because mobilisation of people in isolated pockets during anti-terror operation is making the job of Indian Army tough and delicate at the same time. Though the government in the state would like lesser publicity in television when anti-terrorist operations are on, it acknowledges the power of social media as it continues to shape a different narrative in the valley despite a different position taken by the main stream media. Despite different content running on main channels, social media continues to create a different political landscape where the hero is a martyr and protest is both physical and digital at the same time.