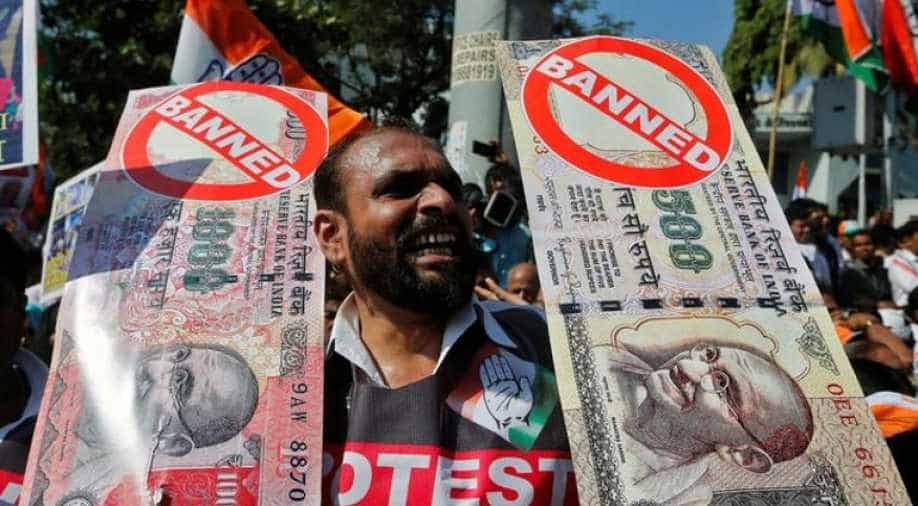 The data released on Wednesday won't show the ill-effects of demonetisation. July-September will be the last quarter before its impact is felt. Photograph:( Reuters )

India can ill-afford to take much pride in having the world's fastest growing large economy when it releases September quarter data on Wednesday, with businesses, farmers and families all suffering after the government's sudden demonetization drive.

Having taken credit for putting life back in a moribund economy when he took power 2-1/2 years ago, Prime Minister Narendra Modi's crackdown on tax dodgers and counterfeiters by removing 500 rupee and 1,000 rupee banknotes from circulation has taken the economy down a very bumpy road.

How bumpy depends who's talking, but almost everyone agrees the drag on growth is likely to last through next year.

The quarterly gross domestic product data released on Wednesday won't show the ill-effects. July-September will be the last quarter before the impact is felt from Modi's bold and risky move this month to force people to deposit their hidden cash in banks, making it easy for the taxman to see.

The median estimate from a Reuters poll showed economists expect economic growth accelerated to 7.5 per cent in the September quarter from 7.1 per cent in the June quarter.

That's not as fast as the 7.9 per cent posted in the March quarter, but it had recovered momentum, and might have gone higher until Modi launched his attack on the so-called "black economy".

While Modi has been praised for his intentions, people are wringing their hands over the cost of taking 86 per cent of the country's banknotes out of circulation virtually overnight.

The most optimistic forecasts suggest that India will finish this fiscal year in March with a respectable, but slightly lower growth rate of 7.3 per cent.

But the most pessimistic forecast, from Mumbai-based brokerage Ambit Capital, for a precipitous drop to 3.5 per cent growth shows just how worried people are.

With a small stock of smaller notes available and new bills of 500 and 2,000 rupee in short supply, Indians had to stand in snaking queues outside banks and cash machines to change their old notes.

The better off may have more money to change, but for the mass of Indians living on the margins the disruption and loss of earnings has caused real hardship.

Modi expects the cash situation to become normal by end-December, but critics say he is being over-optimistic.

Meantime, consumers are spending less, which is hurting small producers who, in turn, are being forced to scale back their activities.

As a consequence, supply chains at small, medium and even larger companies are breaking down. Trucks are stranded with no money for fuel, workers won't load goods for free, and distributors can't pay up. Wholesale markets in many cities are shut.

The cash crunch has jeopardised production of key commodities and hurt rural communities - just recovering after two years of drought - as farmers lack cash to buy seeds and fertiliser. As a result, the area under cultivation for India's winter crop has declined.

CMIE, an economic think tank, reckons the big banknote swap would cost at least $19 billion by the end of 2016 in foregone wages, lost business, and higher administrative expenses alone.

The liquidity shortage will retard efforts to revive private investment that has been plagued by weak external demand and a slow recovery in domestic demand.

And, despite the high economic growth rates seen over the past year-and-a-half, factories' capacity utilization ratio remains stuck near their lowest level since 2009.

"Given that the growth recovery has still not taken full hold, the impact of this demonetisation ... could delay the private corporate capex recovery," analysts at Morgan Stanley wrote in a note, adding that they don't expect that recovery to happen before 2018.

At least the potential for lower inflation holds out some hope that the Reserve Bank of India will extend its easing cycle with a quick interest rate cut.

"The central bank might prefer to bring forward the rate cut to December to support growth and tap the favourable inflation outlook," said Radhika Rao, an economist with DBS Bank.