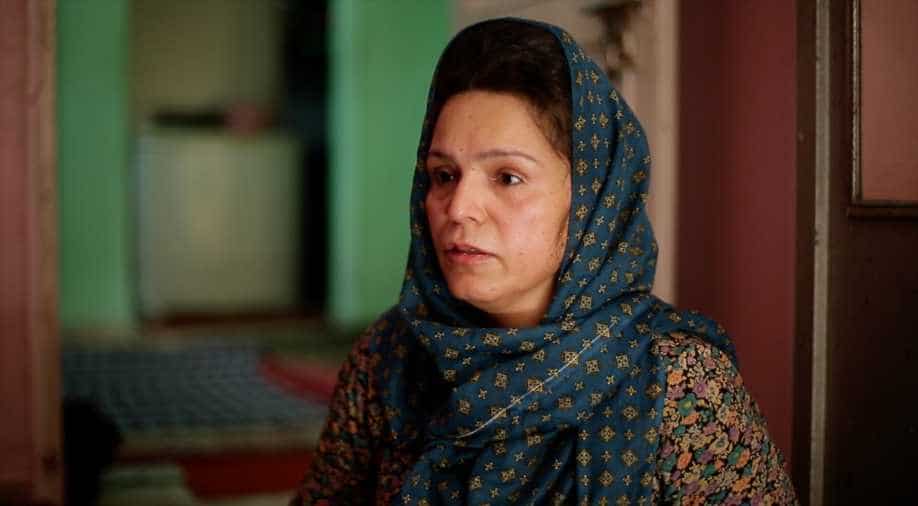 A widow and a mother of five, Ziagul came to India in 2011 after she started receiving death threats from the Taliban. Photograph:( WION )

Clad in a black hijab tucked carefully to fit the frame of her face, 37-year-old Shaheen (name changed) is busy jotting down notes in Persian. The room is dimly lit and it’s a hot summer day in the Indian capital. She stops, her hands leave the diary to reach out for the calculator on the table. Five other veiled women sit around the table. They are speaking fluent Dari, one of the major languages spoken in Afghanistan. It is one animated conversation.

Shaheen looks up and says, “We have to prepare food for 250 heads tomorrow. We are trying to decide who makes what. This is our biggest order till date and we are nervous. If they like the food, we are going to make good money.”

The small room serves as an office for Ilham, a catering start-up run by six Afghan women, all of them single mothers living as refugees in New Delhi. The venture kicked off in 2015 with help from United Nations High Commission for Refugees (UNHCR) and its implementing agency ACCESS Development Services (ADS). Their aim is to help these women achieve economic independence by putting their culinary skills to use.

“The profit from our first order was 750 Indian Rupees ($11). It’s a really small amount but it was extremely significant for us. That’s how Ilham started,” says Ziagul, co-founder of the catering service. The menu is Afghan only and the food is home-cooked.

A widow and a mother of five, Ziagul came to India in 2011 after she started receiving death threats from the Taliban. Her husband was killed by unidentified men back in 2001 but she continued to stay at her home in Herat, Afghanistan. It was only when she realised that her daughters were in danger that she decided to move to India.

“My eldest daughter was a television reporter and my two younger daughters were child actresses in the Afghan film industry. The Taliban threatened us because they thought television was not a place for respectable women,” she says.

Ilham is like a mind balm for these ladies who have seen their lives ripped apart in a land that has constantly witnessed conflict since the end of the 1970s.

“The word Ilham means ‘positive’. After years of bloodshed and struggle, this is the only positive thing to have happened in our lives,” says Shaheen, the lone interpreter in the group. She picked up Hindi by watching Indian movies, she tells WIONews.

Shaheen used to teach at a college in Kabul before her husband was abducted by the Taliban.

“His friends say he was shot dead but I didn’t even get to see his body. I had to take care of four children. I did have a job but the situation became worse when my in-laws asked me to marry my husband’s brother. I refused and was tortured. And that's why I ran away with my children.”

After making her way to New Delhi, Shaheen sustained her family by working as a domestic help before joining Ilham. It has been four years since she arrived here. She hasn’t been able to enrol her children in a school.

“The money was never enough. We barely managed to eat and pay our rent. It’s kind of an irony that I had the best of education possible for a woman in that conflict-torn country and that my children are uneducated.”

But Ilham has filled her with renewed hope. “Ever since I have joined the business, I see hope for them.”

Refugee life for Nadira (name changed), the youngest in the group, has been tough because she does not understand Hindi. While the other women praise her recipe of Afghan dumplings, Nadira talks about her family.

“I divorced my husband because he was abusive and a drug addict. Afghanistan is a hostile place for a separated woman. So, I decided to come to India with my daughter and younger siblings,” she says.

Unlike Shaheen, Nadira has had little education. Ilham is her first taste of empowerment. “I see other women at Ilham as liberated Afghan women and that’s what I want to be,” she says.

The Afghan ladies have attended workshops on enterprise development and teamwork. They have learned to deal with clients. Though the funding is non government organisation-backed (NGO-backed) at the moment, the women hope that Ilham will soon stand on its own feet.

“The NGO is an implementing partner of UNHCR and we have provided these women with the banners, visiting cards and raw materials. But the idea is to turn this into a self-sustainable venture. We are getting them used to running a business,” says Aditi Sabharwal from ADS.

The venture seems to be on the right track. In the past one year, Ilham has taken part in quite a few popular cultural festivals organised here. According to ADS, it is fast becoming a rage in various embassies in New Delhi to order food from there.

Meanwhile, another good news comes in. It is a big one. It is an invite from one of the biggest hotels in New Delhi to cook in the hotel’s kitchen.

“It is overwhelming. We are a little scared because it is a luxury hotel kitchen. But this opportunity shows Ilham is working. The aim now is to get more such orders so that we have enough money to expand our business and to save for our families,” says Ziagul, who wants Ilham to transform into a restaurant, before getting back to work.

Tomorrow is going to be very busy for these Afghan women. A lot is riding on their shoulders: a good future for them and their families. And, possibly, the hope of thousands of displaced people.