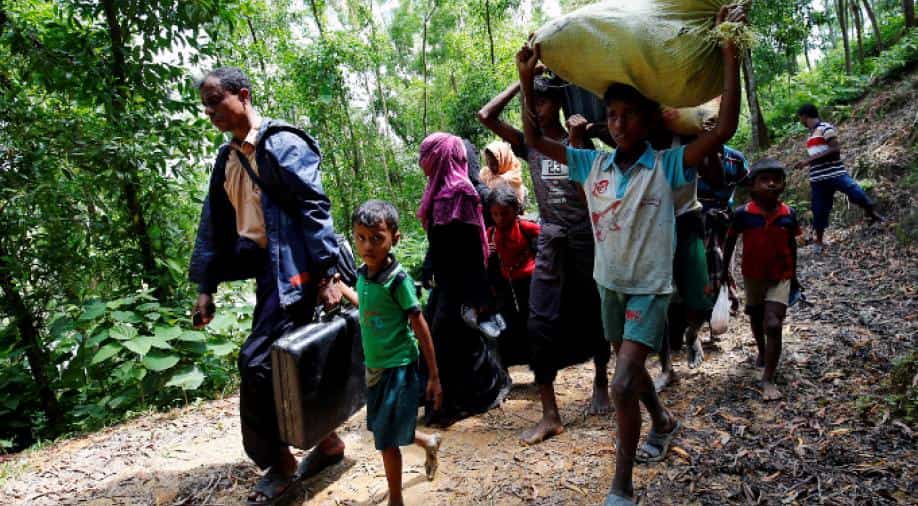 The UN says 294,000 bedraggled and exhausted Rohingya refugees have arrived in Bangladesh since attacks by Rohingya militants on Myanmar security forces in Rakhine on August 25. Photograph:( Reuters )

Bangladesh has postponed plans to begin relocating Rohingya Muslims to a remote island, officials said Monday, amid staunch opposition to the controversial idea among refugees living near the Myanmar border.

Prime Minister Sheikh Hasina was slated to open the new settlement built to house 100,000 refugees on Bhashan Char on October 3, despite warnings the silty strip was prone to violent weather.

But a spokesman for Bangladesh's armed forces, which has overseen the $280 million-effort to transform the muddy islet into a habitable camp, said the opening ceremony had been delayed.

The controversial plan, first floated in 2015, was already well behind schedule.

Officials previously said they wanted to start moving refugees from overcrowded camps near the border with Myanmar to the island in June, before the monsoon season began.

A senior disaster management official told AFP in September that nearly three-quarters of the project was complete, with the navy fast-tracking construction of shelters and evacuation centres.

No reason was provided for the latest delay.

But the proposal to uproot the refugees to a remote island that only rose from the sea in 2006 remains unpopular in the teeming Rohingya camps.

The island is one hour by boat from the nearest land but violent storms make the journey by sea dangerous or sometimes impossible.

"It is cut off from the mainland. What if someone needs emergency medical attention?" said Rohingya community leader Abdul Gowffer.

The UN has insisted that any relocation to Bhashan Char be voluntary.

Local authorities have been seeking to reassure refugees that they will be safe on the island. "We are still working on it. We're talking to the families,"
Bangladesh's Refugee Commissioner Mohammad Abul Kalam told AFP.

One million displaced Muslims live cheek by jowl on hillside shanties near the Myanmar border, in conditions aid groups warn put them at risk from floods, landslides and disease.

There was a further push to get the plan off the ground after 700,000 Rohingya, fleeing a violent crackdown in Myanmar in August last year, poured into southeast Bangladesh.

But rights groups have warned it is too risky to house refugees on the island. Hundreds of thousands have died in Bangladesh from natural disasters in the last 50 years, mostly in coastal areas near Bhashan Char.

Local officials have pointed to a newly-constructed three-metre (nine-feet) high embankment around the island they say will keep out tidal surges in the event of a cyclone. But refugees remain wary.

"Any strong blow from a cyclone and, God forbid, the shelters would be wiped out," said a community leader, Mohammad Shoyeb.