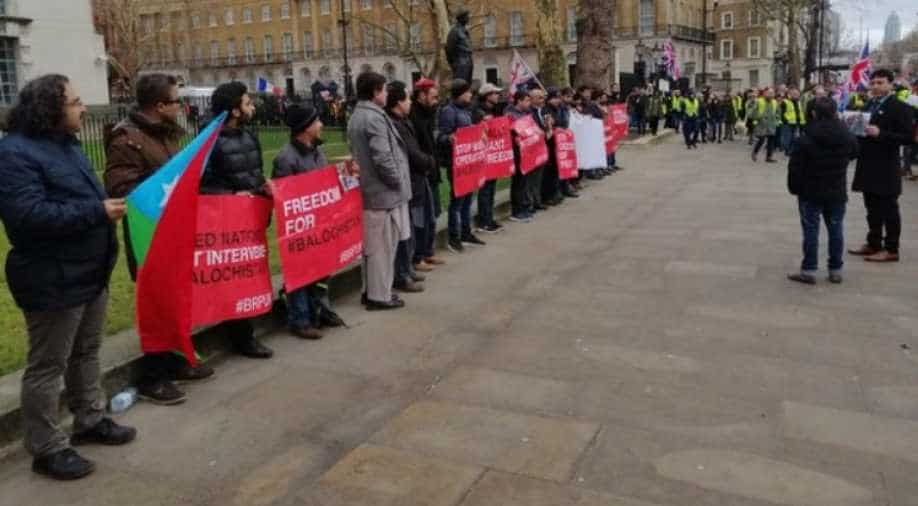 Protestors distributed leaflets outside the stadium, where Pakistan faced South Africa in ICC WorldCup 2019, to raise awareness about enforced disappearances of Baloch and other ethnic/religious minorities in Pakistan

Baloch Republican Party and World Baloch Organisation on Sunday organised a protest outside Lords in London to highlight the pathetic human rights condition in Pakistan.

Protestors distributed leaflets outside the stadium to raise awareness about enforced disappearances of Baloch and other ethnic/religious minorities in Pakistan.

Bhawal Mengal of World Baloch Organisation told ANI, "Our protest outside Lord`s stadium is to inform Pakistanis attending the event but more importantly Pakistani officials at the event that abducting, torturing, killing people who speak out for their rights has never and will never work, you cannot silence us all.

The international community must speak up for justice and help End enforced disappearances of ethnic Baloch, Sindhi, Pashtun, Mohajir and religious minorities in Pakistan.

"Earlier, roadside billboards appeared around the city of London with slogans "Help end enforced disappearances in Pakistan" drawing the world`s attention towards the grave issue.

According to the Commission of Inquiry on Enforced Disappearances, an entity established by the Pakistani government, 5,000 cases of enforced disappearances have been registered since 2014.

Most of them are still unresolved. Independent local and international human rights organizations put the numbers much higher. 20,000 have reportedly been abducted only from Balochistan, out of which more than 2,500 have turned up dead as bullet-riddled dead bodies, bearing signs of extreme torture.

Teenage Ali Haider Baloch, who started protesting for the release of his missing father as a child 10 years ago, himself became a victim of enforced disappearances on Wednesday at the hands of state authorities.

Earlier in January 2014, a mass grave was discovered in Tootak area of Khuzdar. As many as 167 bodies were recovered from the site.

Human rights organisations believed the bodies belonged to previously abducted individuals, who were killed and dumped.

However, the recovered bodies were later buried by authorities without any DNA testing.

Pakistan`s establishment has been long criticized over its practice of enforced disappearances and extrajudicial killings by International bodies and local human rights organisations that dare to speak out on the issue.

Before being elected as Prime Minister, Imran Khan had admitted in multiple TV interviews the involvement of Pakistan`s intelligence agencies in enforced disappearances and extrajudicial killings and vowed to resign if he was unable to put an end to the practice, holding those involved responsible.

Families of the abducted victims have long been protesting for the safe recovery of their loved ones in the provincial capital Quetta, and their protest camp has now completed more than 3,500 days.

The organisers of the campaign have long been engaged in efforts to highlight the worsening human rights situation in Balochistan at international platforms, organising events around Europe and in the United States, focusing on advocacy activities in the European Parliament, the US parliamentary houses, and the United Nations.