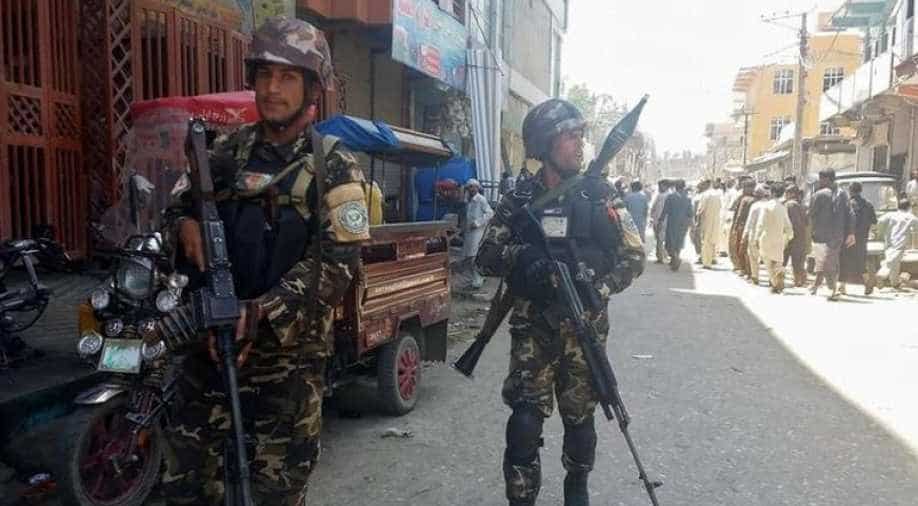 The office of Radio Television Afghanistan was attacked. Photograph:( Reuters )

Militant group Islamic State has claimed responsibility for a suicide attack on a television station in Afghanistan's eastern province of Nangarhar that killed a security guard as well as all three attackers and wounded at least 17 people.

Three gunmen attacked a building of Afghan state television in the eastern city of Jalalabad on Wednesday and engaged in a gun battle with security forces, the provincial governor's spokesman said.

A security guard was killed as well as the three gunmen, authorities said.

The suicide attack wounded at least 17 civilians, Reuters reported. Nine of them have been released by the hospital after treatment.

"Islamic State fighters are currently carrying out an attack inside the state broadcasting building in the city of Jalalabad," the movement's AMAQ news agency said in a statement on instant messaging service Telegram.

The Taliban, which also has a strong presence in the region, denied responsibility. Two of the three blew themselves up 30 metres outside the building.

The third militant engaged in a fierce gunbattle with the country's security forces before he was killed.

The attack comes a day after the Afghan regular army managed to defeat Taliban forces in the Qala-i-Zal district, close to the northern city of Kunduz.

Heavy gunfire could be heard from around the building of RTA, Afghanistan's national broadcaster, located close to the provincial governor's compound. Local sources told WION that as many as 40 people could be inside the building.

Jalalabad is the capital of Nangarhar, the eastern province on the border with Pakistan where Islamic State fighters have established a stronghold, but there is also a strong Taliban presence in the region.

Insurgents fighting to oust the Western-backed government in Kabul have conducted a series of high-profile attacks this year on targets including Afghanistan's largest military hospital and a military base in the northern city of Mazar-i-Sharif.

The Pentagon has reportedly asked the White House to send thousands more troops to Afghanistan to break the deadlocked fight against the Taliban.

US troops in Afghanistan number about 8,400 today, and there are another 5,000 from NATO allies, who also mainly serve in an advisory capacity -- a far cry from the US presence of more than 100,000 six years ago.

Afghanistan suffered its deadliest year on record for journalists in 2016, according to the Afghan Journalists' Safety Committee (AJSC), adding that the country is the second most dangerous for reporters in the world after Syria.

As least 13 journalists were killed last year, AJSC said, claiming that the Taliban was behind at least ten of the deaths.

In January last year, seven employees of popular TV channel Tolo, which is often critical of the insurgents, were killed in a Taliban suicide bombing in Kabul in what the militant group said was revenge for "spreading propaganda" against them.

It was the first major attack on an Afghan media organisation since the Taliban were ousted from power in 2001 and spotlighted the dangers faced by journalists as the security situation worsens.

Dan Coats, the head of US intelligence agencies, warned last week that the security situation "will also almost certainly deteriorate through 2018, even with a modest increase in the military assistance by the US".

US-led forces have been fighting in Afghanistan for almost 16 years, making it America's longest war.