A simple matter of life and death: India's last taxidermist keeps at it 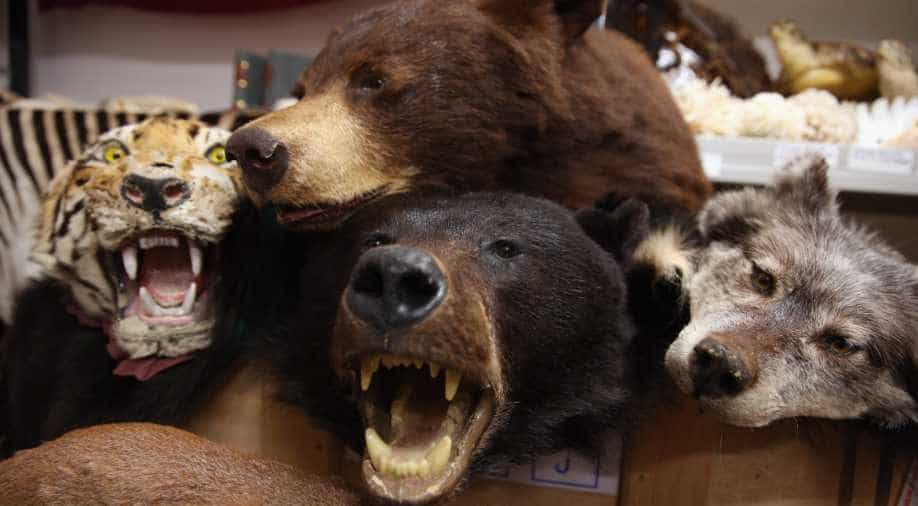 Gaikwad is the only person authorised by the Indian government to stuff wild animals. Photograph:( Getty )

Follow Us
When Santosh Gaikwad, India's last-known practising taxidermist, first started stuffing animals 13 years ago he would keep dead birds in his family's freezer at home, much to his wife's consternation.

Now, as the head of India's only taxidermy centre, he enjoys the use of two deep freezers large enough to hold a lion -- at the government-run workshop in Mumbai's national park.

"I had no option but to keep the dead birds in the home freezer," Gaikwad told AFP, flanked by a snarling leopard, Bengal tiger and two contented-looking lionesses.

"My wife was afraid because we didn't know how they had died. She thought food might get infected. So I wrapped them in two or three plastic bags, air-tight," he added.

Back then, Gaikwad would take the birds from Mumbai's Bombay Veterinary College where he still works as a professor in anatomy department. Now he has built up such a reputation he receives a continuous supply of animals from state governments and pet owners.

Taxidermy, popular in British colonial times, may conjure up images of Indian maharajas killing tigers and proudly displaying their stuffed corpses in their lavish palaces.

Instead Gaikwad, 42, stuffs animals that have suffered a natural or accidental death and is inundated with requests to prepare animals for museums and for grieving pet lovers.

It may seem a strange hobby to some but "there's a lot of demand" said Gaikwad, clad in a green surgical gown at the national taxidermy centre, opened in 2009 in Mumbai's lush Sanjay Gandhi National Park.

Gaikwad, who is the only person authorised by the Indian government to stuff wild animals, explains that "taxidermy is the combination of five arts: "sculpture, painting, carpentry, cobbler, and anatomy".

He skins the animal soon after death. Any remaining flesh is then carefully removed. Measurements are taken of the animal's body mass and a cast replica is prepared based on the original skeleton.

- Stuffed Siberian tiger -
The real skin is then placed on the mannequin and the finishing touches put in place -- glass eyes, perhaps whiskers and finally the stuffed creature is mounted.

He says he has stuffed 13 big cats, including a Siberian tiger, a Himalayan black bear, more than 500 birds, including a Great Indian Bustard and at least 100 fish and reptiles.

In 2014, Mumbai resident Susmita Mallik paid him to stuff her large German Shepherd Bruno after it died of a heart attack. She said the dog was "like a child" to her.

"I just couldn't think of losing him," she told AFP, adding that Bruno looks "exactly" the same as when he was alive.

"He is in the living room. I can touch him and brush him. It makes us feel he is with us," the 43-year-old added.

It takes Gaikwad around eight months to prepare a big cat as he has to balance his work with his responsibilities at the veterinary college.

He's come a long way since his interest in the ancient art was piqued by a visit to the natural history section of Mumbai's main museum in 2003.

"The animals were so realistic that I wanted to learn how to do it but nobody was teaching so I started by searching on the Internet," Gaikwad told AFP.

"An assistant to a British taxidermist told me the procedure and from what I learnt from that person and Google I started to make incisions on birds."

Those initial attempts were unsuccessful though.

"Bird skin is very thin and often it would tear," he explained.

- Mounting concerns -
After mastering birds and fish, the former veterinarian moved on to cats and dogs before progressing to larger land mammals.

Gaikwad says there is no single taxidermy course in India that accompanies all of the five disciplines, and claims to be the only one practising taxidermy on mammals.

"There is no next generation. It's a worry," Parag Dhakate, an animal conservationist, told AFP.

Gaikwad was upset when a devastating fire at India's natural history museum in New Delhi in April destroyed rare specimens of flora and fauna, lamenting the damage done as "a great loss to education".

He sees his work as important to preserving knowledge of India's wildlife particularly if it's an endangered species.

"These are national treasures. If we burn them then we cannot see these animals again and their beauty will have permanently disappeared.

"Taxidermy is the optimal utilisation of that dead body. It's a rebirth. It's life after death."
(AFP)