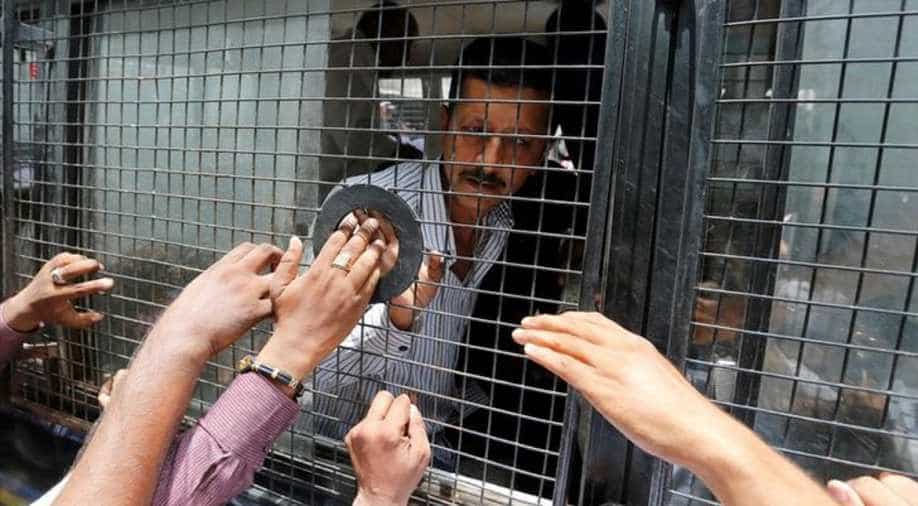 The current Indian Prime Minister Narendra Modi was the chief minister of Gujarat at the time. Here (above) the convicts are driven away after sentencing. Photograph:( Getty )

An Indian court jailed 11 Hindus for life on Friday over the massacre of dozens of Muslims in India's western-most state Gujarat, in 2002, when Prime Minister Narendra Modi was the state's chief minister.

The court sentenced 12 others to seven years in jail over the murder of 69 Muslims who were hacked and burnt to death in a residential complex in the city of Ahmedabad in Gujarat, among them women and children.

Another was given a 10-year term for rioting and arson.

The massacre at the Gulbarg Society housing complex was one of the single worst losses of life in the week-long violence that left more than 1,000 people dead.

Several Muslim families had taken shelter in the complex when it was stormed by a mob of attackers angered by the deaths of Hindus in a train fire.

Zakia Jafri, whose husband was killed in the massacre and who has campaigned for those responsible to be brought to justice, said the sentences were too lenient.

"After all the horrible things they did to so many people, they still gave such flimsy sentences," Jaffri told reporters.

"I do not like this at all. The law has done grave injustice to me."

Prosecutors had sought the death penalty, arguing that those targeted were all "innocent people".

"We had pleaded before the court that if you are not convinced about giving the death penalty, at least give life term til the end of life to all the accused," said public prosecutor RC Kodekar after the sentencing.

"So (the judgement) is not at all satisfactory. It is lenient and inadequate."

Judge PB Desai had earlier ruled the massacre at the Gulbarg Society complex was a spontaneous attack, rejecting claims of a pre-planned conspiracy against Muslims.

On Friday he described the religious violence as "one of the darkest days of civil society in Gujarat" and urged the government not to commute, shorten or otherwise alter the sentences.

More than 100 people have already been convicted over the riots, including one of Modi's former state ministers who was jailed for instigating some of the killings.

Jafri has said her husband, a former opposition Congress party lawmaker, repeatedly called police for help, but none came.

She is fighting a separate legal battle demanding that Modi and others be held responsible for failing to stop the riots.

The issue has long dogged Modi, who was accused of turning a blind eye to the violence as head of Gujarat state.

He was cleared of any wrongdoing in 2012 by a Supreme Court-ordered investigation.

The violence was triggered by the death of 59 Hindu pilgrims in a train fire on February 27, 2002 that was initially blamed on Muslims.

Hindus bent on revenge rampaged through Muslim neighbourhoods in some of India's worst religious riots since independence from Britain and partition in 1947.

More than 300 witnesses gave evidence during the years-long trial that began in 2009 but was delayed by legal challenges. Several of the original accused have since died.

Police were deployed in large numbers at the court in Ahmedabad ahead of the sentencing, which was attended by the defendants' families.

Rights activist Teesta Setalvad, who has been campaigning for justice for the riot victims, said her trust would appeal against the lower sentences handed to 13 men.

"We had argued for exemplary life imprisonment for all the 24 accused," she said.

"We are very disappointed with the lesser sentences. We made a strong case that all of the accused were part of a willfully armed mob... we will appeal this," said Setalvad.

A day before the sentencing the government cancelled the foreign funding licence of the non-profit trust run by Setalvad alleging misuse of funds.

Setalvad, 54, has repeatedly accused the government of targeting her because of her fierce criticism of Modi following the deadly Gujarat riots.