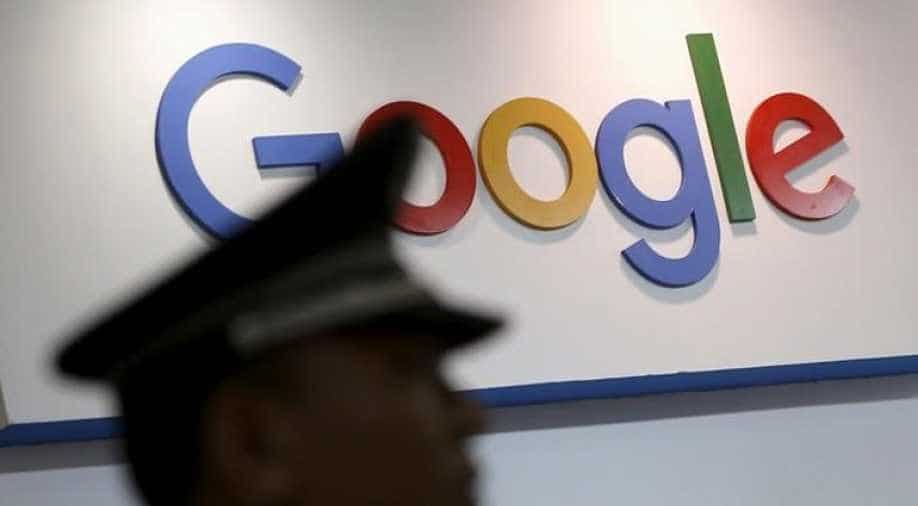 A security guard keeps watch as he walks past a logo of Google. Photograph:( Reuters )

Google had close ties with outgoing Democratic President Barack Obama's administration, and its employees donated much more to defeated Democratic presidential candidate Hillary Clinton than to the Republican Trump.

In the most concrete sign yet that the tech policy balance may be tipping in favour of telecom firms ahead of Trump's presidency, the US Federal Communications Commission on Wednesday halted action on contentious regulatory reform measures opposed by companies such as AT&T and CenturyLink.

In addition, the commission is now expected to reject FCC Chairman Tom Wheeler's high-profile proposal to open up the $20 billion market for rented pay-TV set-top boxes, according to two people with knowledge of the matter. That measure would have dealt a big blow to cable companies and created an opening for firms such as Google and Apple.

Obama had thrown his support behind the initiative, a move AT&T decried as an improper intervention on behalf of what it called a "Google proposal."

"Google has been much more actively involved in this than Apple has," said Jan Dawson, analyst at Jackdaw Research. "I'm not sure it's critical to Google's business at all that it be allowed to provide these next generation set-top boxes, but there was a business opportunity there."

Cable companies have expressed concerns that rivals like Google or Apple could create devices or apps and insert their own content or advertising in cable content.

The FCC's moves came a day after Republican lawmakers urged Wheeler, a Democrat, to avoid any contested regulations in the waning days of the Obama administration, saying new rules would be subject to review by the incoming Republican-led Congress and Trump's administration and "could create confusion if reversed."

"The question is how far will the pendulum swing back" in favour of telecom companies, said Hal Singer, senior fellow at the George Washington Institute of Public Policy. "It has swung in Google's direction under the FCC and Chairman Wheeler." Among other regulations, Trump's Nov. 8 election has increased the chances that Obama's net neutrality rules, adopted by the FCC in early 2015, could be rolled back, analysts said.

Most Republicans strongly oppose net neutrality, which requires internet service providers to treat all data equally and bars them from obstructing or slowing down consumer access to web content. The rules were a victory for internet firms like Google and Netflix that have advocated an open internet.

Jimmy Schaeffler, telecom industry consultant at the Carmel Group, said that "the bottom line is that things will change and there will be less optimism among and fewer opportunities" for companies like Google that do not own the internet networks.

"That's going to impede their success and those that rely on what they do," Schaeffler added.

Republicans in Congress or at a Republican-controlled FCC under a Trump administration could also pare back new privacy rules adopted in October that subject internet service providers to stricter rules than those faced by Google and other websites.

Since Trump's victory, Alphabet shares have fallen 2.4 percent, Netflix shares have dropped 5.9 per cent and Amazon shares are down 2 per cent. AT&T and Verizon Communications shares have been relatively unchanged, while Comcast shares have soared 7.7 per cent.

During Obama's presidency, more than 250 people moved between jobs at Google or related firms and the federal government, national political campaigns and Congress, according to a report this year by the Campaign for Accountability watchdog group's Google Transparency Project.

In the stolen and leaked emails of Clinton campaign chairman John Podesta disclosed by WikiLeaks, an adviser wrote a memo to Clinton in 2014 that said "working relationships with Google, Facebook, Apple, and other technology companies were important to us in 2012 and should be even more important to you in 2016, given their still-ascendent positions in the culture."

"We have begun having discreet conversations with some of these companies to get a sense of their priorities for the coming cycle," the adviser wrote.

Telecoms and cable companies have accused Wheeler of favouring Google at the expense of cable companies. Responding to the criticism, Wheeler said in May: "I hear that allegation, and I scratch my head. I don't get that charge."

"Certainly the sort of cosy relationship that Google enjoyed with the Obama administration is not going to continue with Trump," Jackdaw Research's Dawson added.

Some analysts and former Google lobbyists noted that the company similarly faced a set of challenging regulatory dynamics when it opened its Washington office in 2005, with Republicans controlling the White House and both houses of Congress and the young tech firm widely perceived to have a liberal bent.

"They have a tailwind (in the Obama administration), and that does end now," a former Google employee at the company's Washington office said. "But I think in the long run Google is going to be just fine in Washington. In many ways, its whole operation was built just for moments like this."