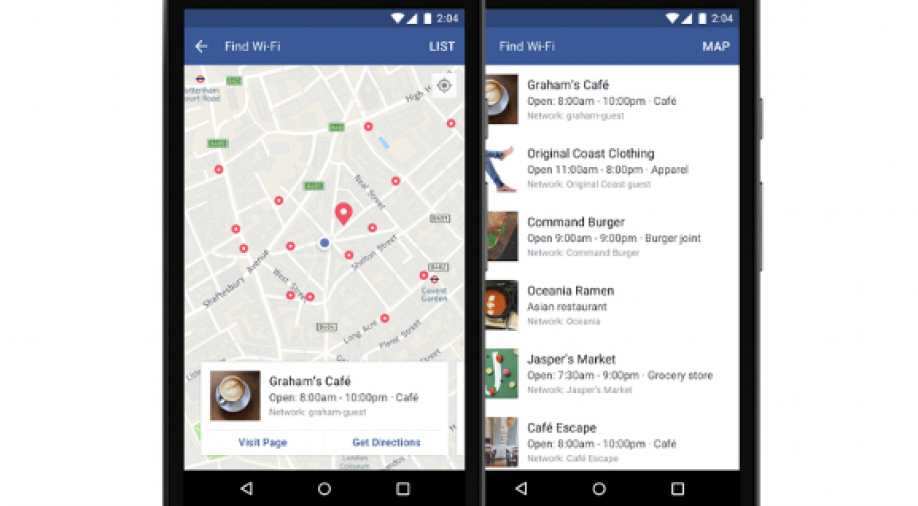 This feature is directly integrated into the Facebook app and can be located under the ‘More’ tab which is placed just next to the notification icon. On clicking that, scroll down and you should see the ‘Find Wi-Fi’ feature. Tapping on it will open up your map which requires you to turn on the ‘Always’ location access on Facebook. You can change the location settings on the Facebook app itself later. On the map, you will see your location and the places nearby which have public Wi-Fi hotspots. Facebook shows you the available location’s name along with the name of its Wi-Fi network as a slideshow on the map itself. You can view it as a list too by tapping on the top right corner of the map.

On the map itself, there will be red dots on locations with public Wi-Fi hotspots. You can just tap on these red spots and the location details will show up. These places with public Wi-Fi hotspots need to have a Facebook page, only then will it show up on the Find Wi-Fi map. With the Facebook page linked, you can get more information on these places like what are they about, and their timings. Additionally, you can also get directions to these places.

Facebook doesn’t necessarily show if these public Wi-Fi hotspots are free and usage would depend on that particular place. For a country like India, where mobile internet connectivity issues are still a major problem, this feature could turn out to be very beneficial. And with public Wi-Fi hotspots rolling out extensively, it would definitely help people in locating them.