A planet that may sustain life found 1,200 light-years away from Earth 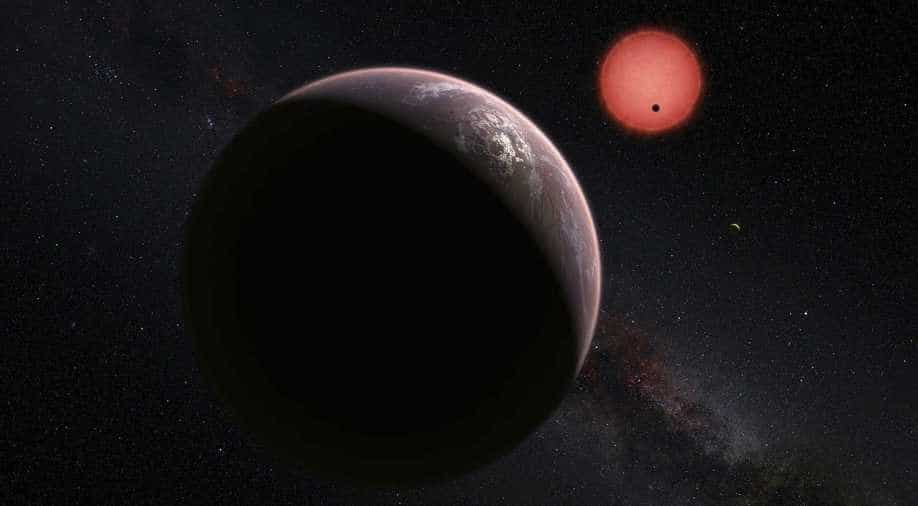 This artist's impression shows an imagined view of the three planets orbiting an ultracool dwarf star just 40 light-years from Earth that were discovered using a specialist telescope at ESO's La Silla Observatory in Chile. Photograph:( Reuters )

The new planet is in constellation Lyra and is likely to be rocky and possibly could have oceans, scientists said.

A planet which about 1,200 light-years away from Earth and 40 per cent larger than its size may be habitable, according to US researchers.

Kepler-62f, which is in the direction of the constellation Lyra, is within the range of planets that are likely to be rocky and possibly could have oceans, scientists said.

NASA's Kepler mission discovered the planetary system that includes Kepler-62f in 2013, and it identified Kepler-62f as the outermost of five planets orbiting a star that is smaller and cooler than the sun, they said.

But the mission did not produce information about Kepler-62f's composition or atmosphere or the shape of its orbit.

Now, scientists from University of California Los Angeles (UCLA) and University of Washington came up with possible scenarios about what its atmosphere might be like and what the shape of its orbit might be to determine whether the planet could sustain life.

"We found there are multiple atmospheric compositions that allow it to be warm enough to have surface liquid water.

This makes it a strong candidate for a habitable planet," said Aomawa Shields from UCLA.

On Earth, carbon dioxide makes up 0.04 percent of the atmosphere, researchers said.

Because Kepler-62f is much farther away from its star than Earth is from the sun, it would need to have dramatically more carbon dioxide to be warm enough to maintain liquid water on its surface, and to keep from freezing, they said.

Researchers ran computer simulations based on Kepler-62f having an atmosphere that ranges in thickness from the same as Earth's all the way up to 12 times thicker than our planet's.

Kepler-62f also has various concentrations of carbon dioxide in its atmosphere, ranging from the same amount as is in the Earth's atmosphere up to 2,500 times that level, and there are several different possible configurations for its orbital path, scientists said.

They found many scenarios that allow it to be habitable, assuming different amounts of carbon dioxide in its atmosphere.

Shields said that for the planet to be consistently habitable throughout its entire year, it would require an atmosphere that is three to five times thicker than Earth s and composed entirely of carbon dioxide.

Having such a high concentration of carbon dioxide would be possible for the planet because, given how far it is from its star, the gas could build up in the planet's atmosphere as temperatures get colder to keep the planet warm, she said.

Scientists made their calculations of the shape of the planet's possible orbital path using an existing computer model called HNBody, and they used existing global climate models to simulate its climate.

The findings were published in the journal Astrobiology.