Cannes 2019: Most fashionable looks from the Indian stars at the film festival

Bollywood's best graced the 72nd edition of the Cannes Film Festival 2019. From Deepika Padukone changing in four outfits to television actress Hina Khan making her debut at Cannes 2019, the festival witnessed the best of India from 14th May to 25th May. Sonam Kapoor attended the festival with sister Rhea Kapoor, whereas Priyanka Chopra arrived with singer husband Nick Jonas.

Other Indian celebrities like Kangana Ranaut, Diana Penty and Huma Qureshi were also seen at the film festival. 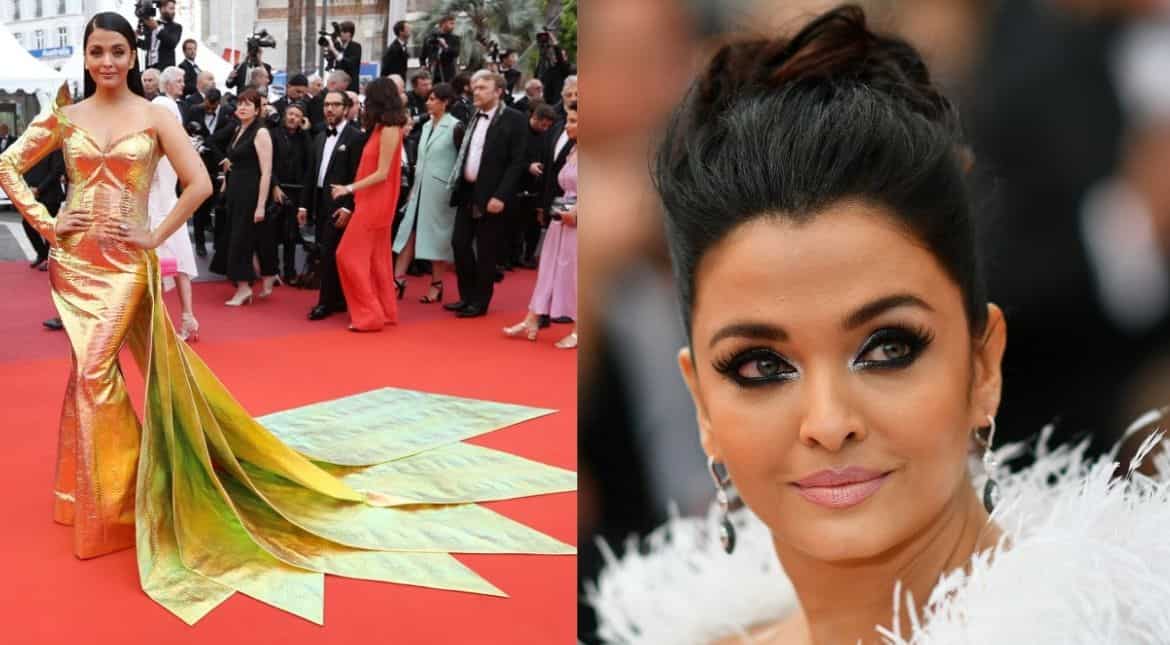 Aishwarya Rai Bachchan wore a daring metallic gold gown by Jean Louis Sabaji on the first day and a white gown with ruffled detailing for her second red carpet look, at Cannes 2019. 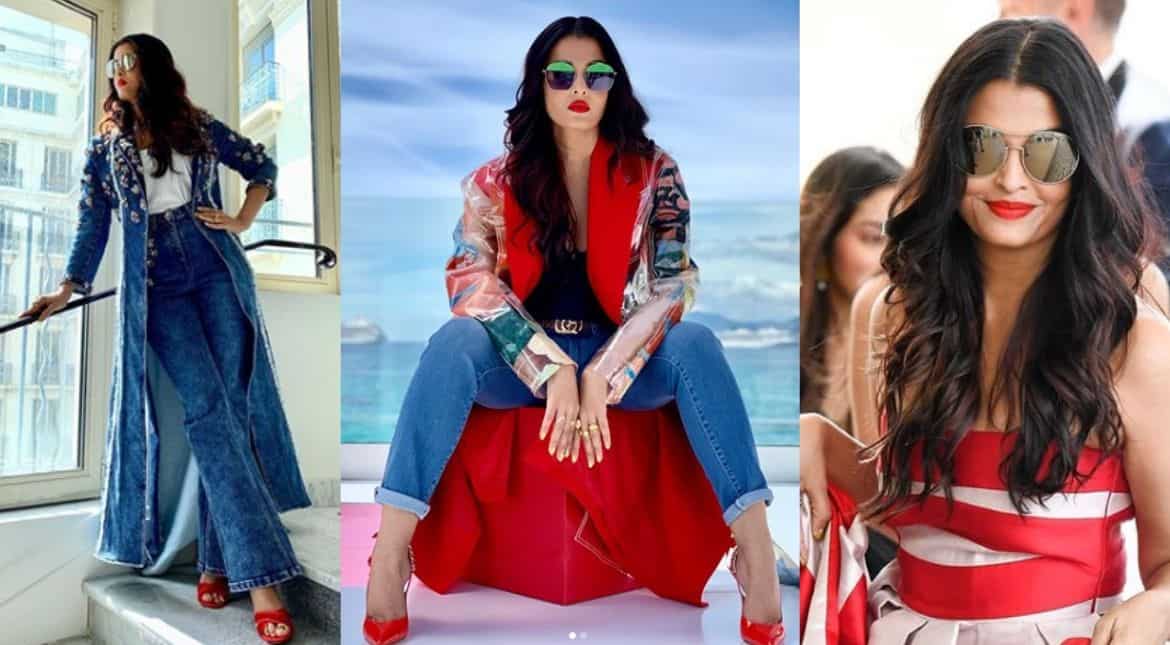 For her off-duty looks at the French Riviera, Aishwarya wore a dress by Leal Daccarett, a denim outfit by Falguni and Shane Peacock and a trendy trench coat.Although Aishwarya was one of the last Indian stars to show up at Cannes 2019, she left everyone stunned by her bold outfits. 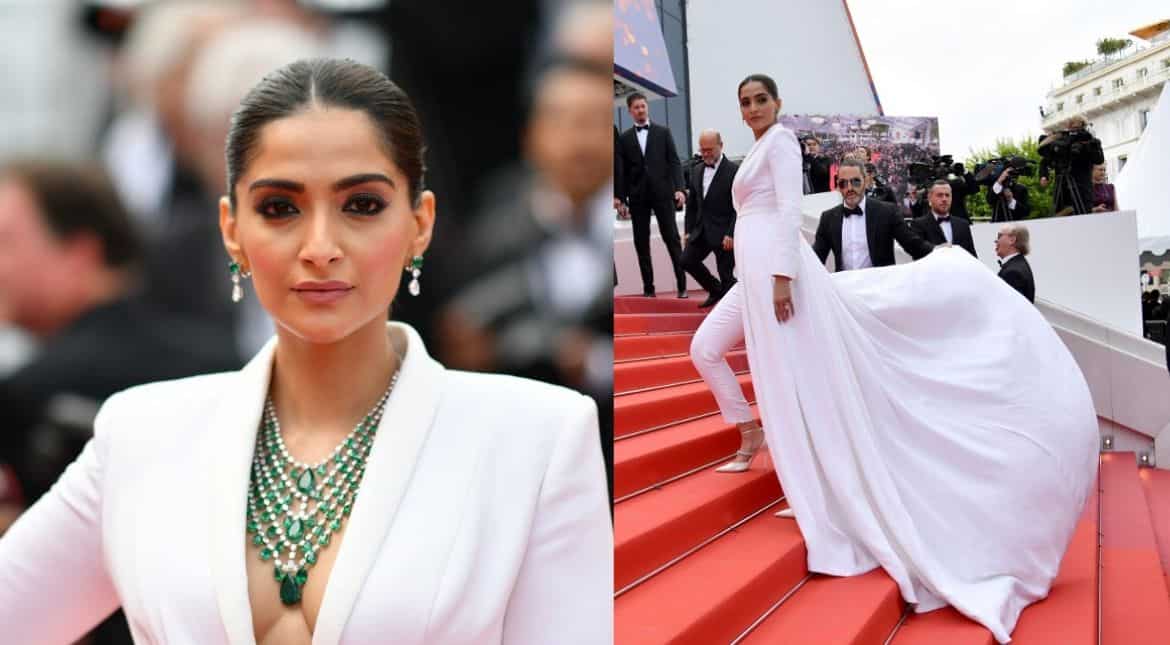 Sonam Kapoor donned an ivory tuxedo by Ralph & Russo which had a long train adding a gown like look to it. She paired it with a statement necklace and opted for mid-parting and a tight bun for her hair styling. 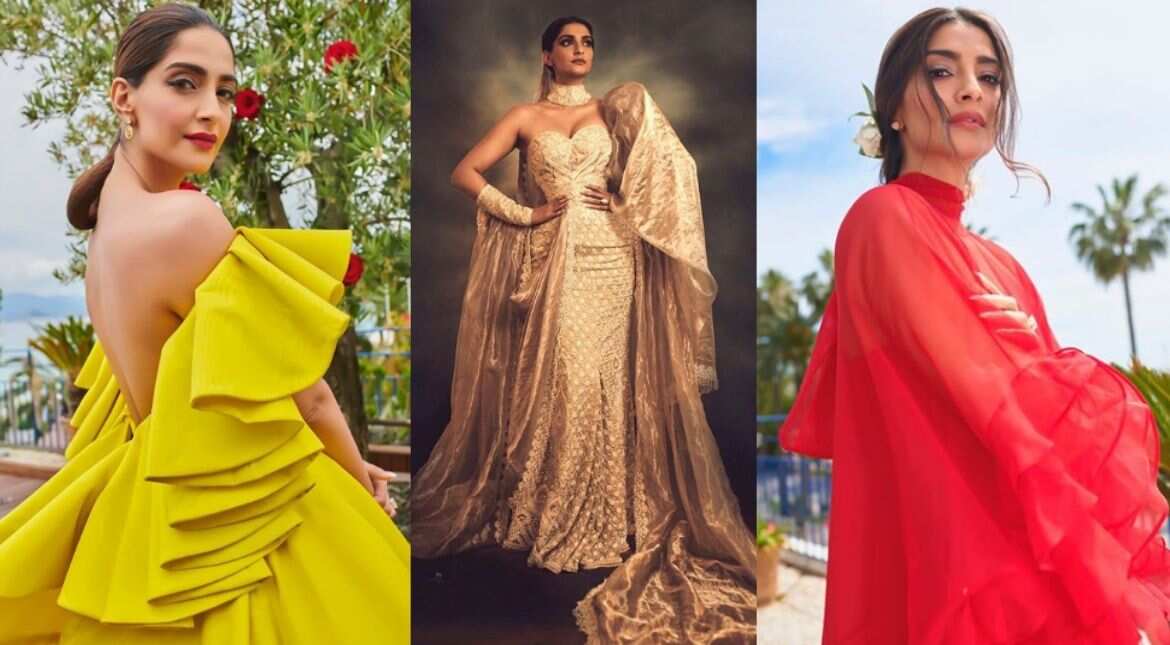 Sonam Kapoor being the fashion icon, she is

Sonam Kapoor arrived at the French Riveria with sister Rhea Kapoor. The fashionista as expected just didn't surprise us at the red carpet with her sartorial choices, but also in her other looks during the day at Cannes. From looking like a vintage modern day queen to owning the yellow off-shoulder dress, Sonam gave a subtle lesson on- how it's done to everyone over there! 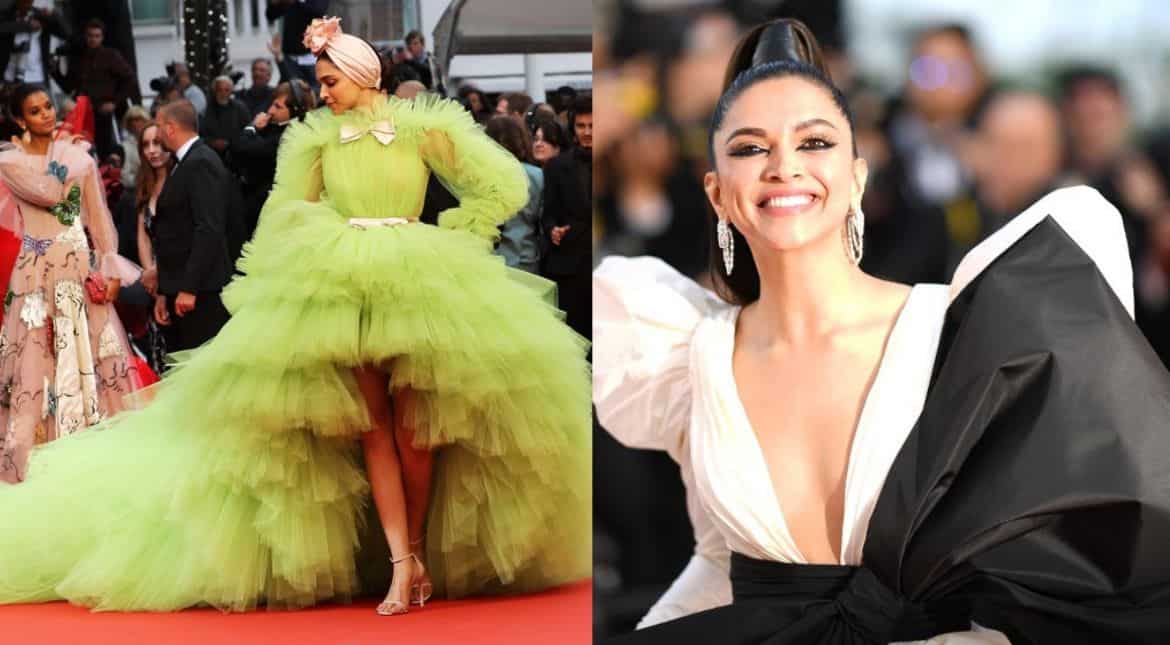 Deepika Padukone wore a lime green Giambattista Valli Hute Couture 14 tulle gown to the screening of 'Pain and Glory'. For her second appearance on the red carpet, she chose a cream gown by Peter Dundas, finished with an exaggerated chocolate brown bow. 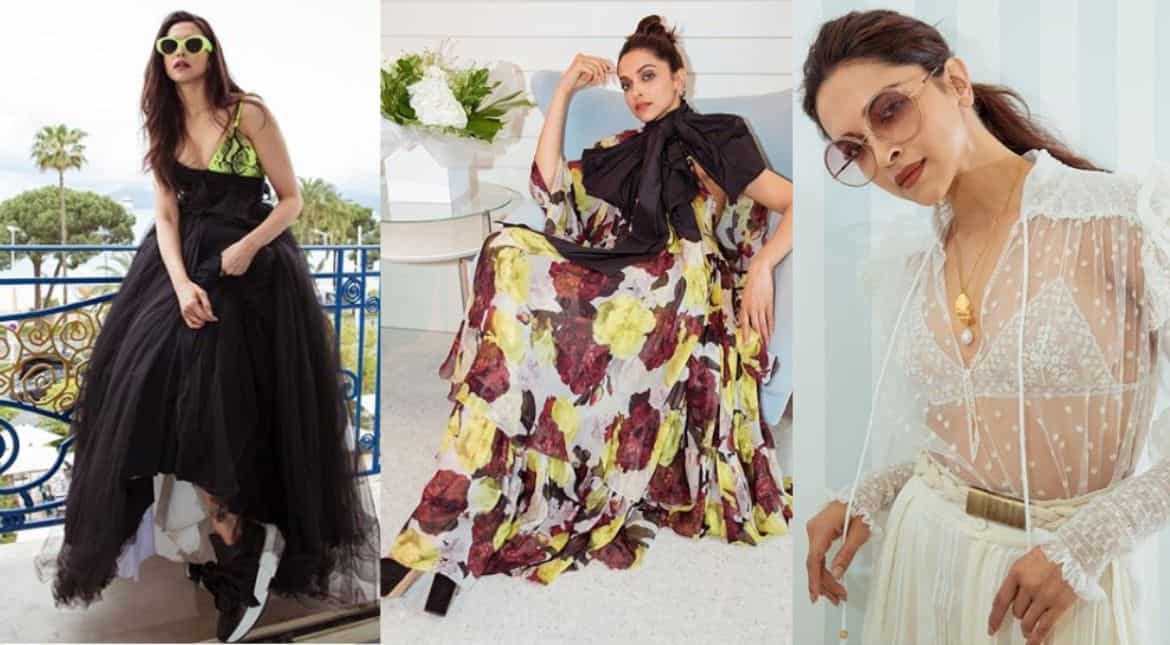 When Deepika Padukone channelised the gangster within

Actress Deepika Padukone stunned everyone by changing into four outfits at Cannes 2019! She carried the variety of attires effortlessly- from the long floral dress with a large bow at the neck to a big dress with a neon green top. It was all we had never seen before. 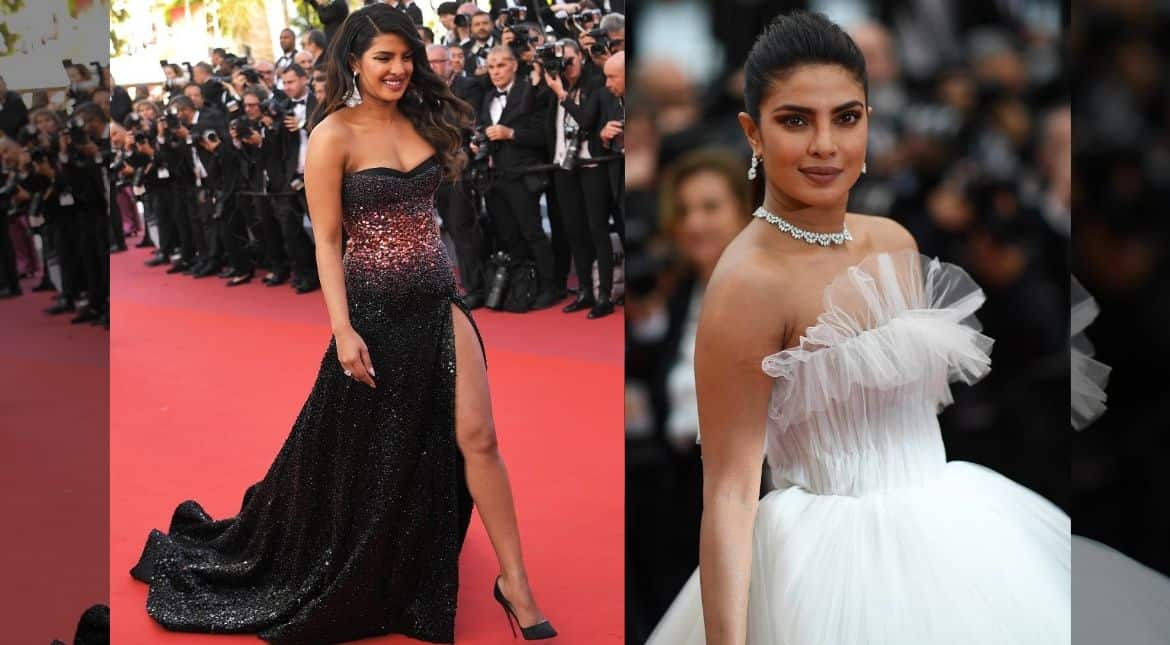 Priyanka Chopra made a rather classy debut on the Cannes red carpet. Priyanka wore a custom made Roberto Cavalli embellished gown for her red carpet appearance. For her second look, she opted for a gorgeous Georges Hobeika number  and a neat hairdo to complement her outfit. She accessorised her look with diamond jewelry. 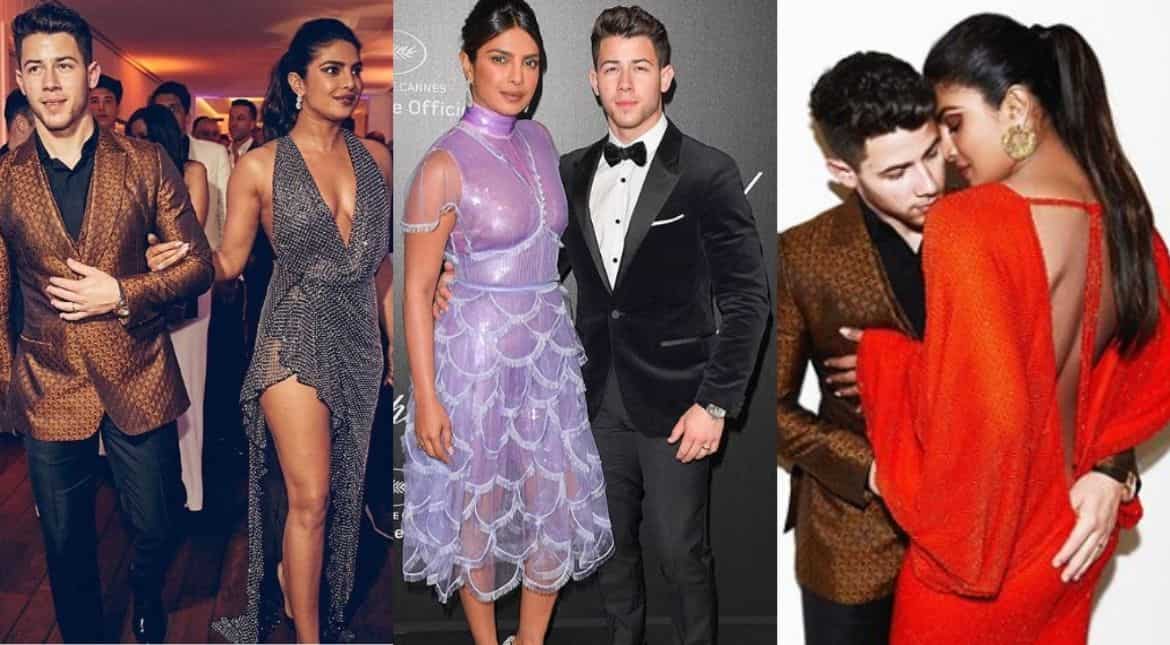 Priyanka Chopra with husband Nick Jonas at a brand's party

Priyanka Chopra and Nick Jonas took their fairytale romance to Cannes. They were seen together recreating magic at the festival and their social media posts are proof enough on how they set the red carpet on fire. 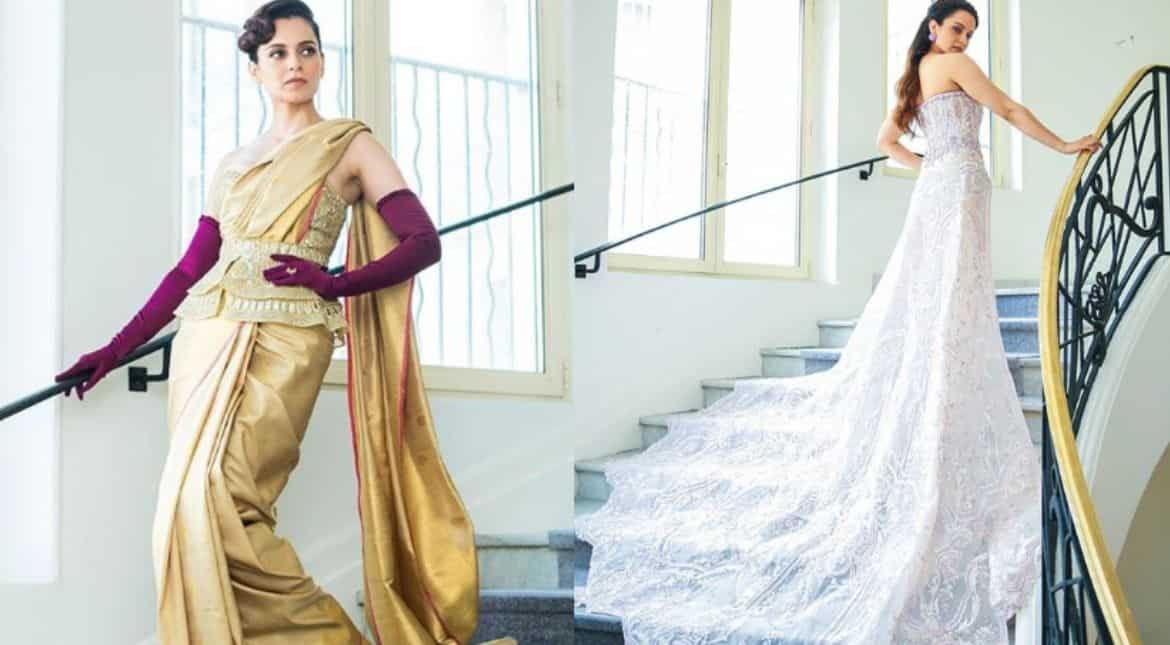 Kangana Ranaut sashayed down the Cannes red carpet in a custom Falguni Shane Peacock corset with a golden Kanjeevaram saree and burgundy-coloured gloves. For her other look, she chose a pink and lavender Michael Cino off-shoulder gown with exquisitely detailed embroideries and a long trail. 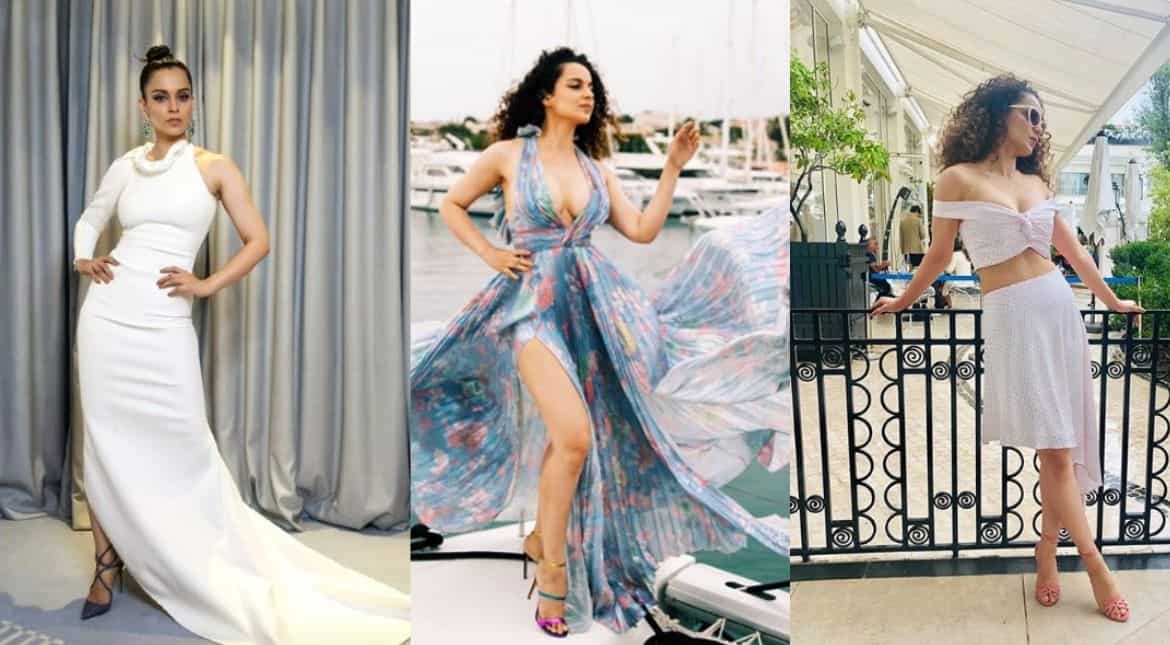 Kangana Ranaut being the queen at the French Riviera

Kangana posed on a yacht in her floral Ralph and Russo gown flowing freely in the sea breeze. For an after- party, she wore a gown by Toni Maticevski. It was a one sleeve full-length white gown with a small hint of a train coming from the figure-hugging dress. The actress was also seen leaving for a cover shoot in a white crop top and matching skirt. 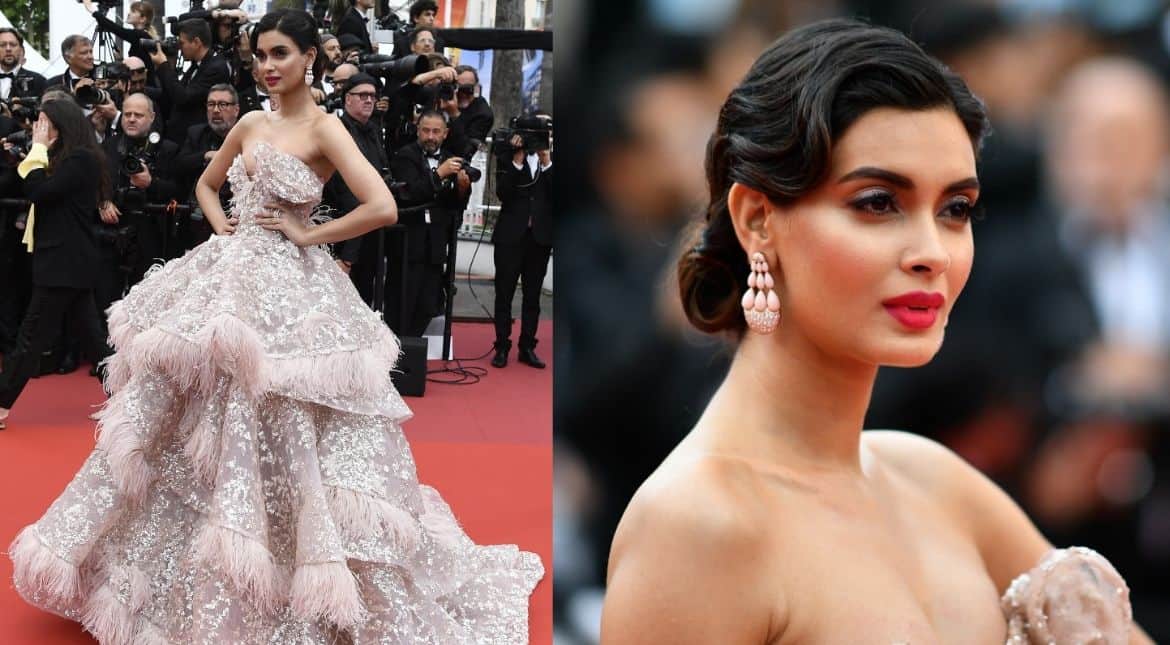 Bollywood actress Diana Penty made her debut at the Cannes film festival 2019. She wore a beige coloured off shouldered ball gown layered beautifully with sequins and feathers on the edge to add volume. 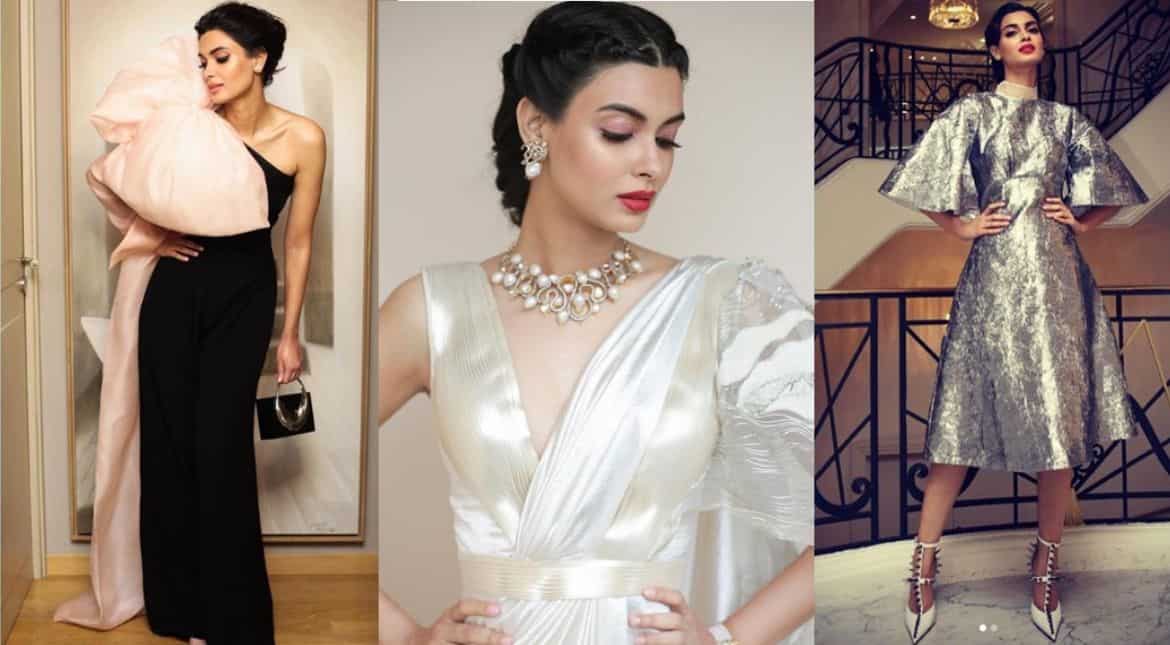 Diana wore a plain black couture gown by Celia Kritharioti, it was a light peach oversized bow covering the length of the dress.

She also opted for a white and gold satin saree by Indian designer Amit Aggarwal, with a belt on her waist with the saree's thigh-high slit which gave the humble Indian saree a global appeal. 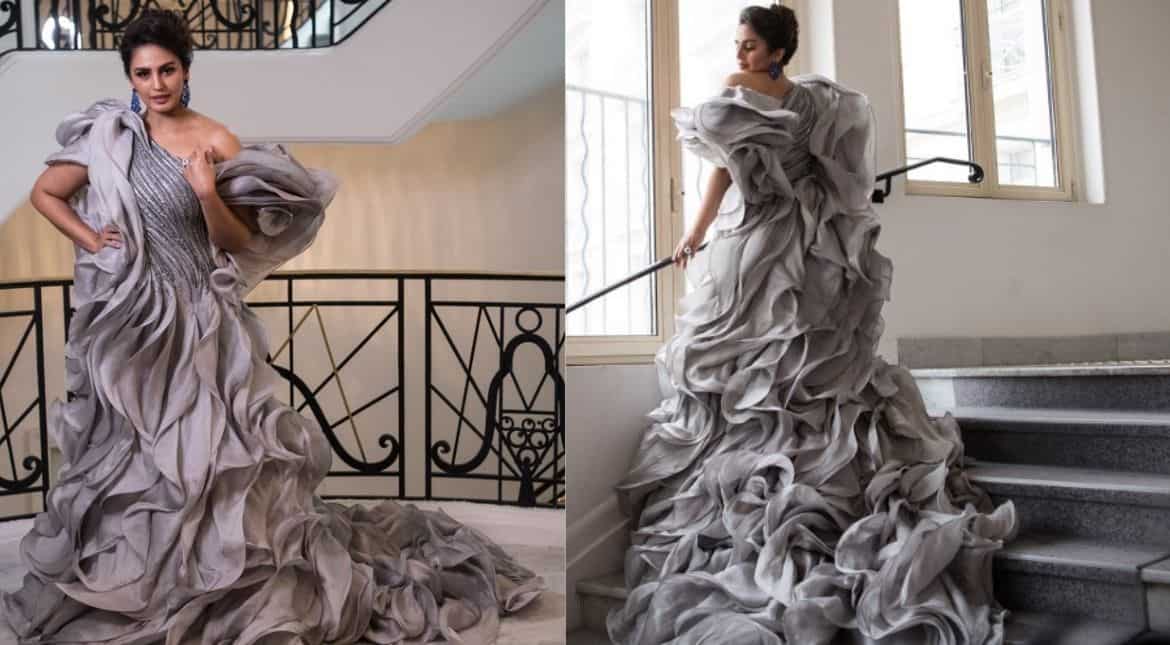 The Cannes Film Festival is currently underway and has witnessed the presence of numerous Bollywood celebrities going all out with their fashion choices this year. One such diva, Huma Qureshi has been grabbing eyeballs thanks to her stunning outfits. Huma wore a metallic hued grey Gaurav Gupta gown accentuated with ruffled train, giving it the perfect volume. She added just the right amount of drama to her outfit with exaggerated sleeves and sparkling lines adorning her torso. 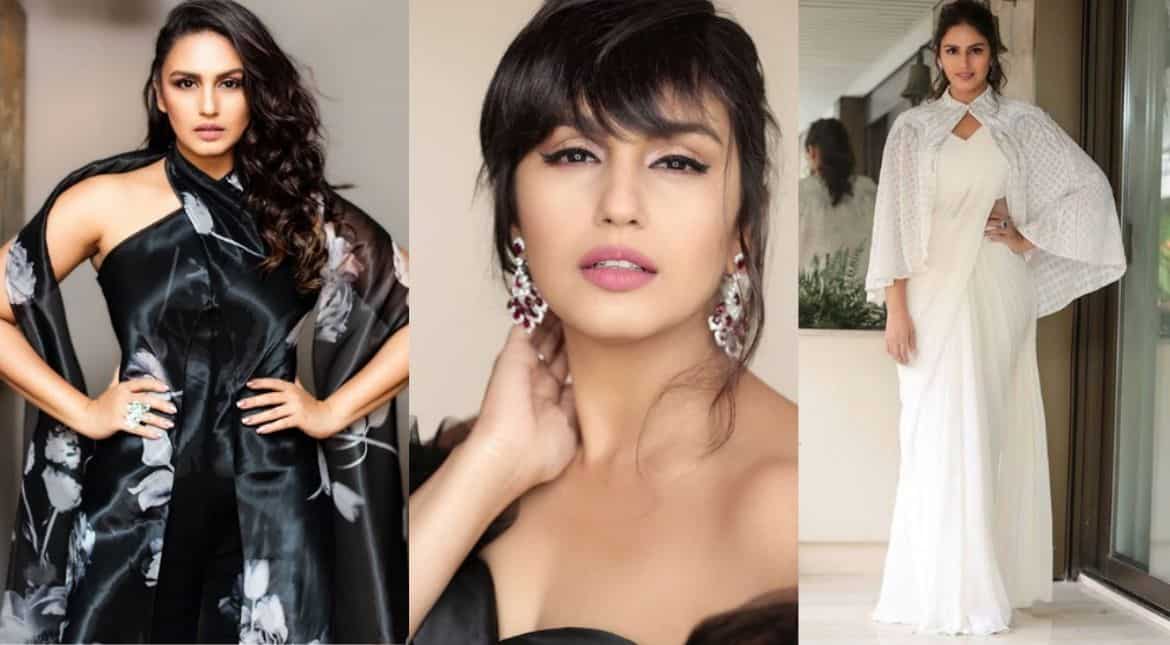 After raising the bar with her stunning outfit at the Cannes red carpet, Huma Qureshi grabbed eyeballs with various other enticing outfits.The bollywood actress looked comfortable in all her attires and chose simple and classy outfits. 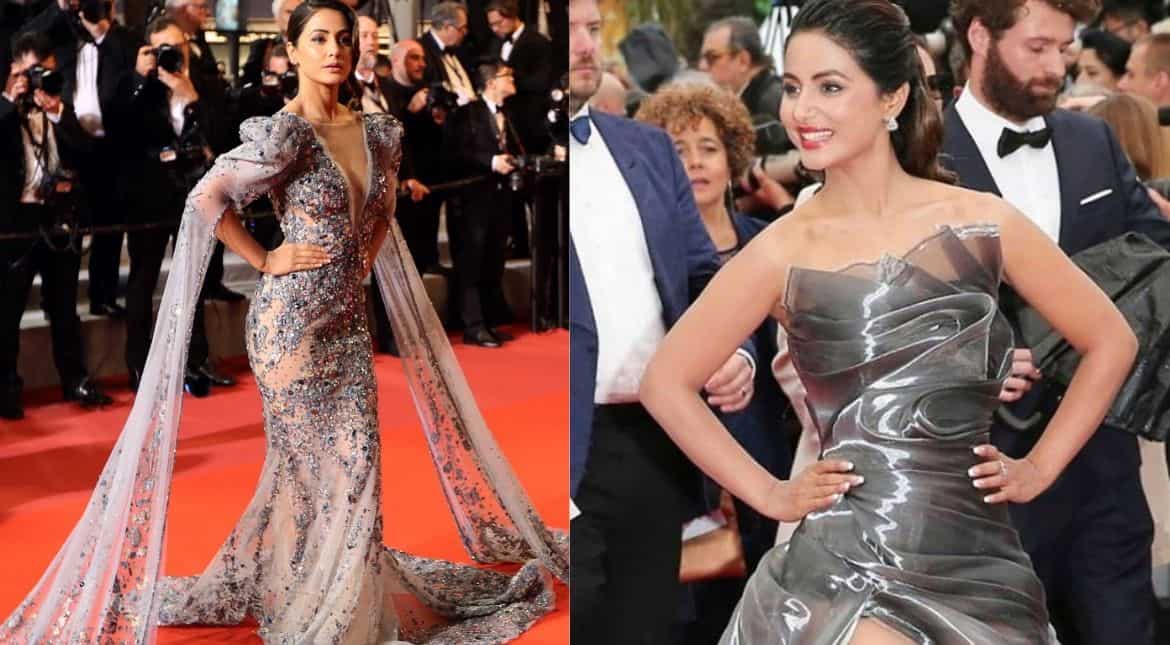 Indian TV actress Hina Khan made her Cannes debut in a shining designer Ziad Nakad grey-blue gown as she stunned the onlookers with her poise and grace. Hina who is a famous TV actress in India kept her look for the international film festival classy as she tied her hair in a messy bun with neat hair flicks coming out from one side of the ear. She opted for minimal makeup with light pink lips and matching grey eyeliner that went with her dress. 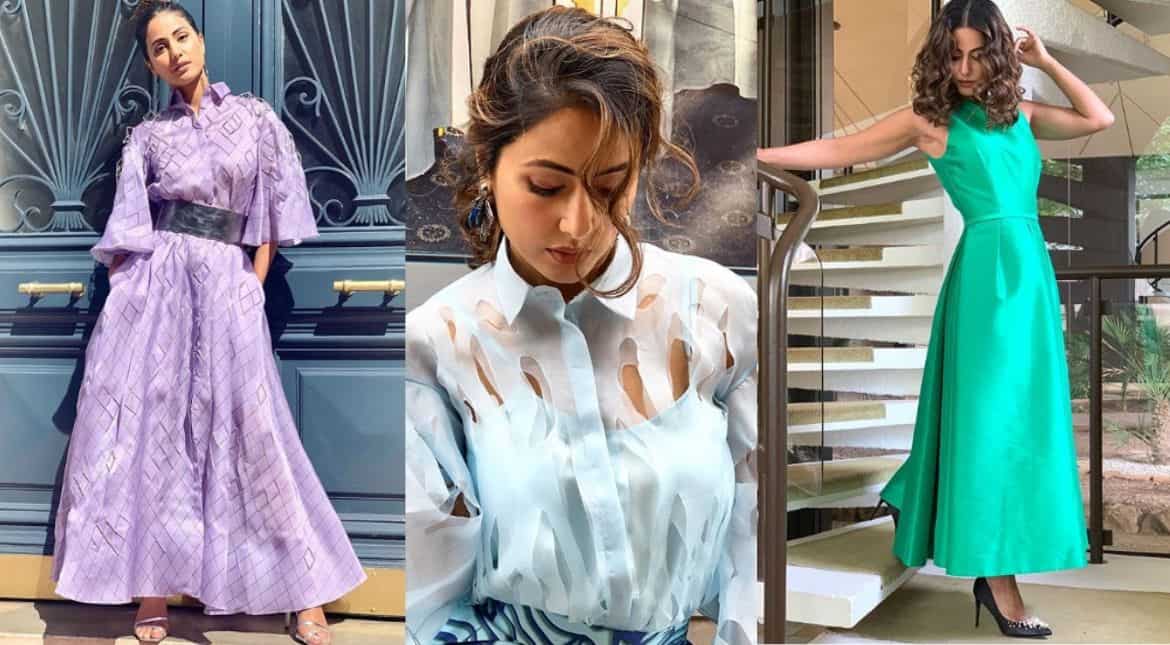 Television actress Hina Khan made her debut at the Cannes film festival 2019. The 'Kasautii Zindagi Ki' actress walked the red carpet and she was literally gleaming in the dramatic grey wrap gown with a trail. Here are a few other outfits of hers'  which she pulled off during the days, at Cannes.