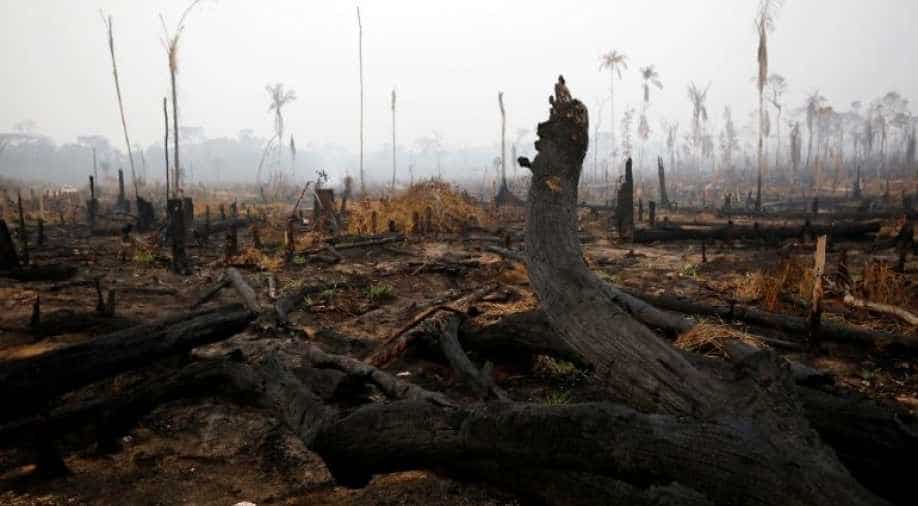 A tract of Amazon jungle is seen after a fire in Boca do Acre, Amazonas state, Brazil. Photograph:( Reuters )

It's clear that the world is staring at a climate emergency. The fires in the Amazon rainforests have brought several issues to the fore.

The Amazon forest fires in distant Brazil matter very much to India too. India is the world's biggest importer of edible oils -- like palm, soybean, canola and sunflower oil. Bulk of these oils are imported from Argentina, Brazil, Malaysia, Indonesia, Ukraine and Canada. Any impact on the production of these edible oils will hurt India. This is the immediate economic impact. Then there is the long-term environmental impact which has far-reaching consequences.

It's clear that the world is staring at a climate emergency. The fires in the Amazon rainforests have brought several issues to the fore. Some of these issues, like rising deforestation and the need to preserve forest cover, are disconcerting. Across the world, the forest cover is getting destroyed with each passing year. In the last three decades, except in 1992, forest area has decreased in size every year. The Indian government has consciously attempted to increase the forest cover in the country. Since 2015, India has added nearly 7000 square kilometres of forest cover. According to official data, most states have seen an increase in forest cover. This is a welcome change.

India and Brazil have a common interest. Like Brazil, India is also home to tropical forests and has the knowledge and technology to save biodiversity. India is the one of few countries that has managed to increase the forest cover and could share its knowledge with Brazil. Besides, BRICS should come up with some plans to help Brazil. The grouping – in which B stands for Brazil -- was formed for better co-operation between the four developing countries. BRICS has a bank, and as countries like Brazil and Bolivia struggle to contain the fires in the Amazon basin, BRICS could intervene to help in a big. And, lead the way for the rest of the world.