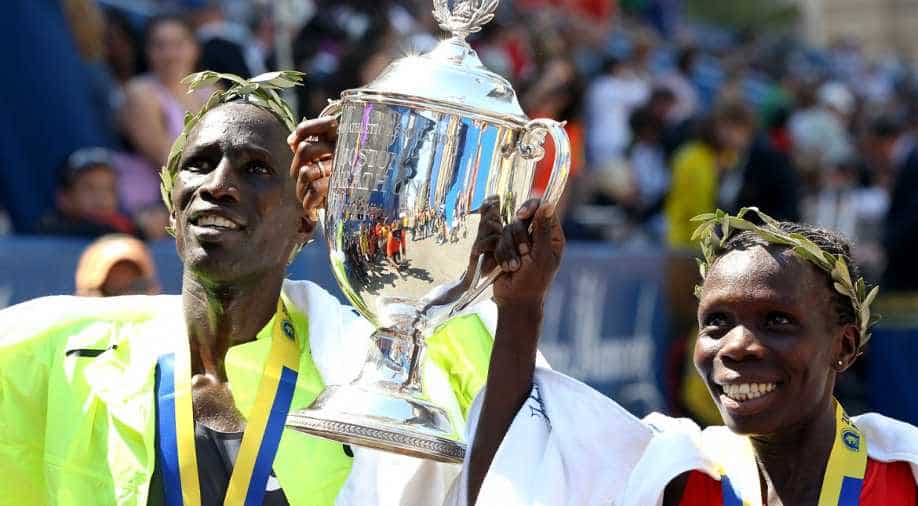 Follow Us
Dawn comes misty and cold on the steep sides of the Nyaru escarpment as Kenya's Olympic men's marathon team begin their training run, a line-up of veteran athletes including a current lawmaker.

With the Rio Olympics Games less than two months away, the team with two-time London marathon winner Eliud Kipchoge and 2012 Boston marathon champ Wesley Korir, have stepped up their preparations in a bid to reclaim the title they last won eight years ago.

The 32-year-old Korir is also a serving member of the Kenyan parliament, well known as an anti-doping campaigner.

A surprise inclusion in the squad, he joined the team for the first time to run the 40-kilometre (25-mile) course and was left bruised after the workout near Eldoret in Kenya's north-west region.

"The key now is to train hard, stay focused and remain healthy. I think we are going to take the top three positions in Rio," Korir, taking a break from politics to train, told AFP.

Korir says he is "excited to be the first-ever sitting Member of Parliament anywhere in the world to get the opportunity to run at the Olympics."

He has been training alone around the Ngong Hills outside the capital Nairobi.

"I was scared at the beginning because I have never done a 40K here in Kenya," he told AFP.

"What I learnt today is that I need to do more hill work to build the strength in my legs. Today proved that I am on the right track -- so what I need to do is stay healthy and continue the training with my teammates."

Kenya won its first-ever Olympic men's marathon medal in 2008, when the late Samuel Wanjiru powered his way through the streets of the Chinese capital Beijing, to become the youngest champion at age 21.

At the 2012 Olympics in London, a relatively unknown Ugandan, Stephen Kiprotich, capitalised on the benefits of training at altitude in Kenya to steal the Kenyan thunder and become his country's first Olympic marathon champion.

Kiprotich, 27, continues to base his training in Kenya and was part of the group doing the hilly workout under Kenyan Olympic marathon coach Richard Metto.

Kiprotich, who added a World title to his Olympic crown in Moscow in 2013, is well aware of the tough competition that awaits him in Rio.

"Rio is saying I should defend my title, but the Kenyans and Ethiopians will be my biggest opponents," the Ugandan athlete told AFP.

Among the Kenyans, Kipchoge, who won a 5,000-metre silver medal in Beijing behind Ethiopia's Kenenisa Bekele, is considered the favourite to win the Olympic marathon title.

Unbeaten in the six races since making a successful transition from the track to the marathon, Kipchoge has twice come close to breaking the world record of two hours, two minutes and 57 seconds currently held by compatriot Dennis Kimetto.

But a world record will not be on the mind of the 31-year-old in Rio.

"I know many people see me as the favourite in Rio but I don't have any pressure. I will just go and enjoy running my own race. I always make sure I hit the target all the time", he said.

"It is great and a big boost to train with the current Olympic champion and one of our political leaders in this country."

"I will not focus on time in Rio, but we will be running as a team. My main focus will be to run good race and aim to finish in the top three positions," said Kipchoge.

Kenya has also named one of the strongest line-ups in the women's team, including Helah Kiprop, the reigning world marathon silver medallist, and London marathon champion Jemima Sumgong.

Kenya is yet to win the Olympic women's gold medal.