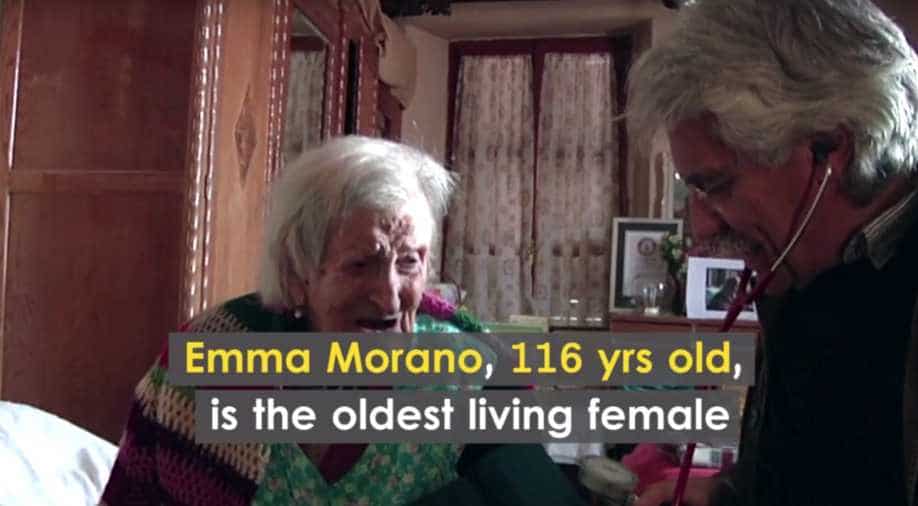 "People come. I don't invite anybody but they come. From America, Switzerland, Austria, Turin, Milan... They come from all over to see me," she said with an amused smile. Photograph:( Facebook )

An alert and chatty Italian woman, Emma Morano, on Tuesday celebrates her 117th birthday as the last known person alive who was born in the 19th century.

Born November 29, 1899, she is the world's oldest living person and the secret to her longevity lies in eschewing usual medical wisdom.

"I eat two eggs a day, and that's it. And cookies. But I do not eat much because I have no teeth," she told AFP in an interview last month in her room in Verbania, a town in northern Italy on Lake Maggiore.

On a marble-topped chest of drawers stands proudly the Guinness World Records certificate declaring her to be the oldest person alive.

The eldest of eight children who has outlived all her younger siblings, Morano knows that this landmark birthday will be an event to celebrate and that people are curious about her.

"People come. I don't invite anybody but they come. From America, Switzerland, Austria, Turin, Milan... They come from all over to see me," she said with an amused smile.

But she's not sure she will eat some birthday cake, saying "the last time I ate a little, but then I did not feel good".

Birthdays aside, Morano is a solitary person. Having left her violent husband in 1938 shortly after the death in infancy of her only son, she lived alone, working in a factory producing jute sacks to support herself.

She clung to her independence, only taking on a full-time career last year, though she has not left her small two-room apartment for 20 years, and has been bed-bound for the last year.

While her mind is alert, she is very deaf, speaks with difficulty and does not see well enough to watch television, instead she spends her time either sleeping or snacking.

Among the plans surrounding the birthday, she is expected to receive some relatives and journalists as well as Verbania Mayor Silvia Marchionini.

And in the town at the local theatre, there will be a performance of music over three centuries in Morano's honour and also a preview of a romanticised biography called "The woman who saw three centuries".