Stairway to plagiarism? Led Zeppelin on trial over claim they stole their famous guitar riff 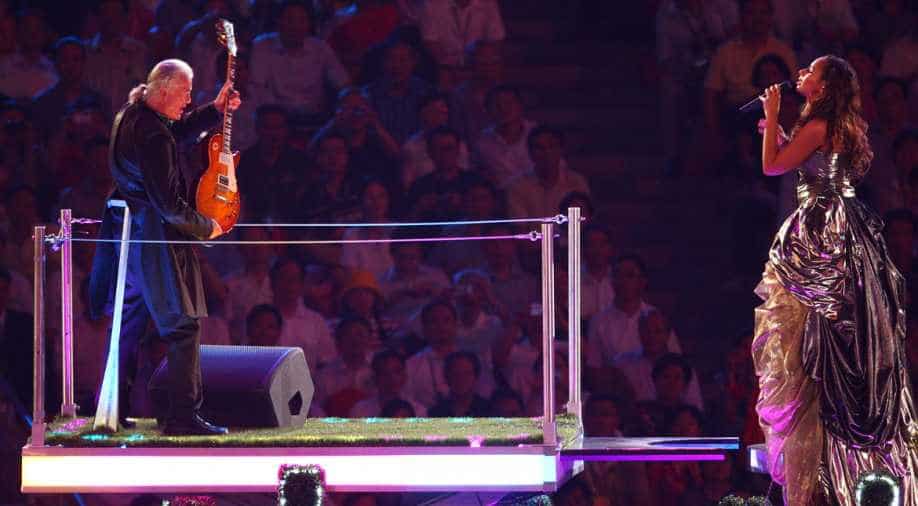 Led Zeppelin's Jimmy Page and Robert Plant appeared in court on Tuesday to deny accusations that they "lifted" the opening bars to iconic rock song "Stairway to Heaven".

The musicians, dressed in black suits, arrived to a throng of reporters at Los Angeles federal court, where a jury of four men and four women was played their anthemic hit.

Spirit, a psychedelic LA band that enjoyed a niche following but never attained the superstardom of Zeppelin, claims the melancholic guitar that opens "Stairway" was taken from its instrumental track "Taurus".

Spirit's guitarist Randy Wolfe, who went by the nickname Randy California, never took legal action and drowned in Hawaii in 1997, but a lawsuit was filed by his trustee and friend Michael Skidmore, who was in court.

"This case can be summarised in six words: Give credit where credit is due," said Francis Malofiy, Skidmore's attorney.

The attorney played a recording for the jury of the introduction to "Stairway", describing the arpeggio as a "lifted composition".

At issue is whether Led Zeppelin had access to 1967's "Taurus" before recording "Stairway" in London in December 1970 and January 1971.

Zeppelin opened for Spirit when the hard British rockers -- Plant, Page, John Paul Jones and the since deceased John Bonham -- made their US debut on December 26, 1968 in Denver.

Surviving members of Led Zeppelin have submitted testimony that they never had substantive interaction with Spirit or listened to the band's music.

Defense attorney Peter Anderson told jurors that Page, 72, and Plant, 67, were not familiar with Spirit or its output, and that Page had no recollection of ever hearing "Taurus".

Anderson played the first two minutes and 14 seconds of "Stairway" as Page nodded along.

"'Stairway to Heaven' was written by Jimmy Page and Robert Plant and them alone, period," Anderson said.

Skidmore has not specified the damages he is seeking, but various stories in the music press have posited a possible settlement at anywhere between a symbolic $1 plus a writing credit to as much as $40 million.

The lawsuit speaks of Led Zeppelin's "deep-rooted history of lifting composition from blues artists and other songwriters who they have repeatedly failed to credit".

It lists disputes over 16 other Led Zeppelin songs, many of which were settled by giving the complainant a songwriting credit and royalties, including classics "Whole Lotta Love" and "Babe I'm Gonna Leave You".

The court heard from California's younger sister, horse trainer and musician Janet Wolfe, who described her brother as a "prodigy".

Wolfe, of Ventura, California, recalled how the family had traveled to New York in 1966, where Randy, then just 15, met and befriended Jimi Hendrix.

The rock legend hired the youngster to play back-up guitar, and gave him the name "Randy California" to distinguish him from another Randy in the band, the court heard.

Wolfe, 62, recalled how California had complained later in life about Led Zeppelin plagiarizing "Taurus", which he had written for a girlfriend.

"It was something that upset him for many, many years," she said.

Multi-instrumentalist Jay Ferguson, 69, who played with Spirit and later wrote music for film and television, described "Taurus" as a "really special number".

"It was a palate cleanser... it was beautiful. It was a different style of music than anything else we played in the shows," he told the court.

Ferguson, who has written music for Arnold Schwarzenegger action movie "The Terminator" (1984) and comedy series "The Office", said Spirit played the song at the majority of their concerts.

He described having a "meet and greet" with Plant at a Spirit gig in Britain in the 1970s, recalling he was "flattered" that the singer had turned up to see the band.

The trial is expected to last about five days.
(AFP)