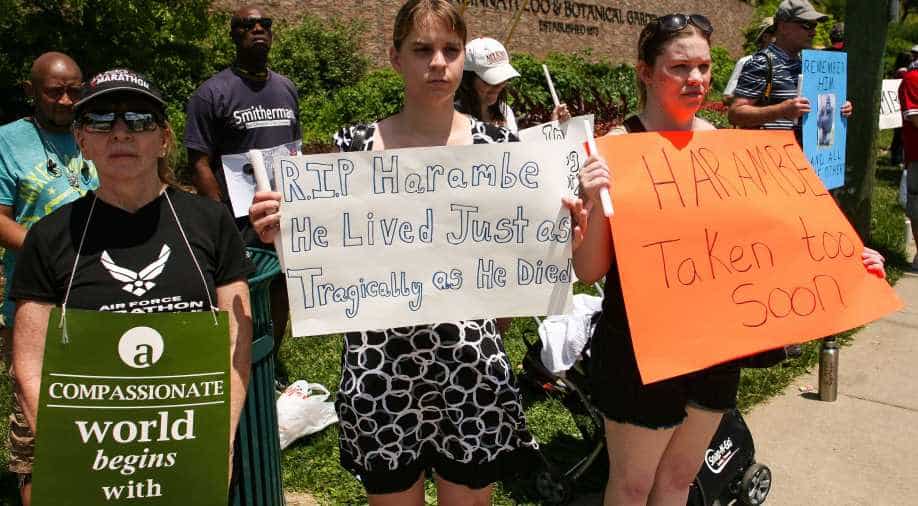 People attend a vigil outside the Cincinnati Zoo and Botanical Gardens, two days after a boy tumbled into its moat and officials were forced to kill Harambe, a Western lowland gorilla, in Cincinnati, Ohio, U.S. May 30, 2016. Photograph:( Reuters )

After shooting dead a gorilla at the Cincinnati Zoo to save a 3-year-old boy, zoo officials said they had collected a sample of his sperm, raising hopes among distraught fans that Harambe could sire offspring even in death.

Officials at the main U.S. body that oversees breeding of zoo animals, however, said it was highly unlikely that the Western lowland gorilla's contribution to the nation's "frozen zoo" of genetic material of rare and endangered species would be used to breed.

"Currently, it's not anything we would use for reproduction," Kristen Lukas, who heads the Association of Zoos and Aquariums' (AZA) Gorilla Species Survival Plan, said on Wednesday. "It will be banked and just stored for future use or for research studies."

Lukas' statement undercuts a weekend statement by Cincinnati Zoo director Thane Maynard that the death of the 17-year-old young silverback, who had been too young to breed, was "not the end of his gene pool."

Zoo officials did not respond to calls on Wednesday seeking more detail on their plans for Harambe's sperm.

There are currently 350 gorillas of Harambe's species in US zoos, according to the AZA, which accredits zoos, including Cincinnati's and approves breeding plans. That population is large enough to maintain a breeding program so robust that many female gorillas of child-bearing age are given hormonal contraceptives.

Zoo officials have stood by the decision to shoot Harambe dead on Saturday, saying the 450-pound (200-kg) animal could have easily slain or grievously injured the toddler.

But their decision to kill the gorilla has drawn criticism online and sparked a Cincinnati police investigation into the boy's family.

The highly charismatic animals are closely related to humans, making them popular zoo attractions. Major US zoos from New York's Bronx Zoo to the San Diego Zoo rely on gorillas as a major draw for visitors.

INTO THE 'FROZEN ZOO'

Harambe's sperm will likely go into a collection of samples taken from gorillas and other animals that are preserved in liquid nitrogen and typically viable for hundreds of years, said the American Association of Zoo Veterinarians director Robert Hilsenroth.

"We call it the frozen zoo," said Hilsenroth. "It's nice to have that in your pocket just in case."

Given the numbers of gorillas in captivity, Harambe's genetic material would likely be drawn on only in the event of some new disease that took a heavy toll on the population, the AZA's Lukas said.

"In a dire situation like that, we would then be able to continue the population," Lukas said.

There are about 175,000 of the gorillas in the wild, but habitat destruction, hunting and disease are resulting in a rapid decline in the population.

The practice of breeding gorillas in captivity has been criticized by animal rights groups.

"In theory, conserving is great but without a habitat what's the point," said Julia Gallucci, primatologist for the People for the Ethical Treatment of Animals.