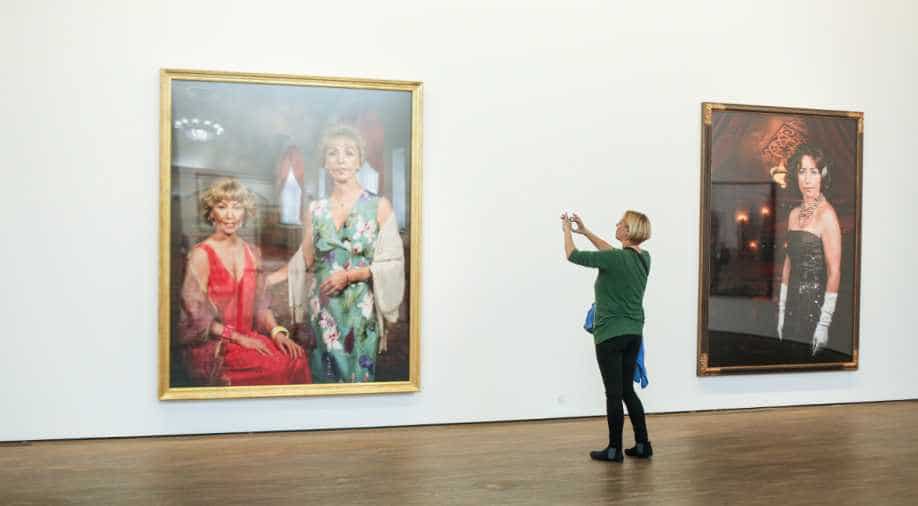 In the first major exhibition at the Broad since its grand opening last September, 120 pieces created over four decades by Sherman are on view. Photograph:( Getty )

Long before the selfie, there was Cindy Sherman, the shape-shifting artist best-known for her often grotesque self-portraits.

For the first time in 20 years, some of her most influential works are going on view at Los Angeles's Broad Museum, focusing on Hollywood's feminine cliches in the city that invented them.

From blond Hitchcock starlets to aging socialites to pin-up housewives, Sherman has imitated the spectrum of feminine tropes.

"She's produced some of the most influential work of her time," said Philipp Kaiser, the curator of the exhibition "Imitation of Life," which opened last Saturday.

One of the world's most celebrated contemporary artists, Sherman's works are worth millions and consistently break auction records.

The artist plays her own model, donning elaborate costumes and garish makeup, that play on cinematic imagery.

The show, which runs until October, draws "on cinema roles in the shaping of identity and stereotypes" said Joanne Heyler, director of the Broad Museum, at a press event.

In the first major exhibition at the Broad since its grand opening last September, 120 pieces created over four decades by Sherman are on view.

The works come mostly from the collection of real estate mogul and philanthropist Eli Broad, a long-time collector of the 62-year-old artist's work.

"Cindy has held for a long time a very special place in our collection," said the wealthy businessman, who remembers being "dazzled" when he discovered her work in the 1980s.

The show is coming at a poignant moment, as critics lambast Hollywood for the lack of recognition given to women in the industry, at the same time that Hillary Clinton could become the first woman in the White House.

"It's a particularly interesting time to present to the public the work of an artist which questions the way the media shape feminine identity in images, and how, as an artist, she talks back to these images," said Heyler.

Each of her photographs resemble a short silent film, added Heyler.

Submission and the male gaze

Sherman sometimes employs the same techniques old Hollywood is known for, including large-scale projections that resemble frozen movie screens, reproduced on entire walls of the Broad.

She also poses with comically frightened expressions, as if taken aback in the style of a "damsel in distress," putting herself in submissive positions.

In another image, she takes the opposite perspective and adopts the "male gaze," expressing desire with a bold stare.

The New York artist's body of work also includes imagery from fashion magazines, like a satirical photo series that plays on images from the 80s. In those works Sherman poses in chic designer outfits with chalky makeup, slumped shoulders and greasy hair.

Sherman is her own model, therefore, her subjects age along with her, Heyler told AFP.

In her most recent pieces, recently shown in New York, Sherman plays 1920s stars including Marlene Dietrich and Greta Garbo, with their extreme eyebrow arches, turbans and theatrical poses.

"Imitation of Life" will also include Sherman's black comedy film "Office Killer," a special screening of the artist's directorial debut, appropriately looping in a city defined by its film industry.
(AFP)