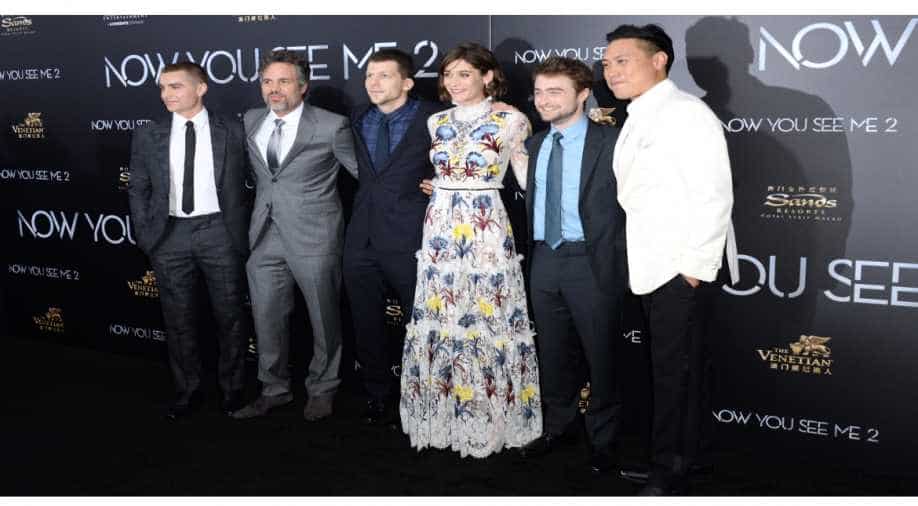 After pulling off a large-scale bank heist masked as a complex magic trick in 2013's Now You See Me, the cast are back again with new tricks and sleight of hand, this time with a little "Harry Potter" magic.

Now You See Me 2, out in US theatres on Friday, picks up three years after the 2013 film and shows the 'Four Horsemen' magicians use their illusions to try and stop a sinister tech tycoon and his unethical practices.

The cast, which includes Jesse Eisenberg, Woody Harrelson, Dave Franco, Mark Ruffalo and Lizzy Caplan, were put through 'magic camp' in order to learn sleight of hand and other tricks to perform on screen.

"It was literally like three card tables set up in a dirty production room covered with half eaten food," Ruffalo said.

"But the idea of 'magic camp' is like a great idea and I think that idea could be huge," Harrelson quipped.

Harrelson, who plays Horseman Merritt 'The Hermit' McKinney, showed off his magic skills at the film's New York press event by guessing the card a reporter picked out of a deck. Former Harry Potter star Daniel Radcliffe, who plays the villainous Walter Mabry, proudly demonstrated a card trick he learned during filming.

"We're not like a shoot-em-up (movie)," Radcliffe said. "There are some amazing sequences that involve the sleight of hand and the magic."

Radcliffe, who has eight films' worth of magic experience as boy wizard Harry Potter, fondly looked back on the franchise that catapulted him to fame.

"If I was getting angsty about being recognised as Potter, or being associated with Potter I think I would waste a ton of energy like worrying about that. People are always going to associate mewith it and I'm very happy about that," he said.