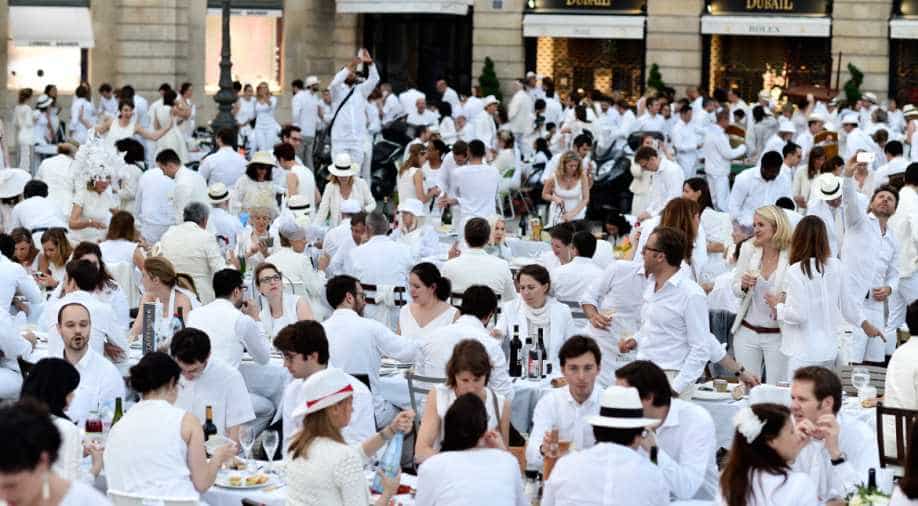 Follow Us
It's the world's classiest flash mob when a highly selective group of guerrilla gourmets armed with picnic baskets and linen napkins take over a famous landmark.

The latest "Diner en Blanc" (Dinner in White) took place in Paris Wednesday when some 7,000 people dressed in white from head to toe descended on the swanky Place Vendome to dine al fresco on fine food and wine in the heart of the capital's luxury district.

The venue of the annual event -- which has now spread across the globe from Stockholm to Mumbai and Shanghai -- was kept tightly under wraps until the last minute.

Last year 13,000 took over the court of honour of the 17th-century Palais Royal in the French capital, sitting down to eat at rows of tables laid along the length of the square.

In previous years, the secretive upper crust club has taken over the Champs-Elysees, the Chateau de Versailles and the gardens under the Eiffel Tower for its impromptu soirees.

Having dined and then danced their fill, members of the group -- which attempts to recreate the glamour and elegance of bygone French high society -- go home on the stroke of midnight.

The organisers demand that guests "conduct themselves with the greatest decorum, elegance, and etiquette".

And they pride themselves on tidying up afterwards, leaving the venue just as they found it.

The phenomenon began in the French capital nearly three decades ago long before social media kickstarted the trend for flash mobs, and it has since spread to 70 cities worldwide.

The movement was founded by the French businessman, Francois Pasquier in 1988 who dreamt of eating in the open air in unusual places. The first dinner was held in the city's Bois de Boulogne park