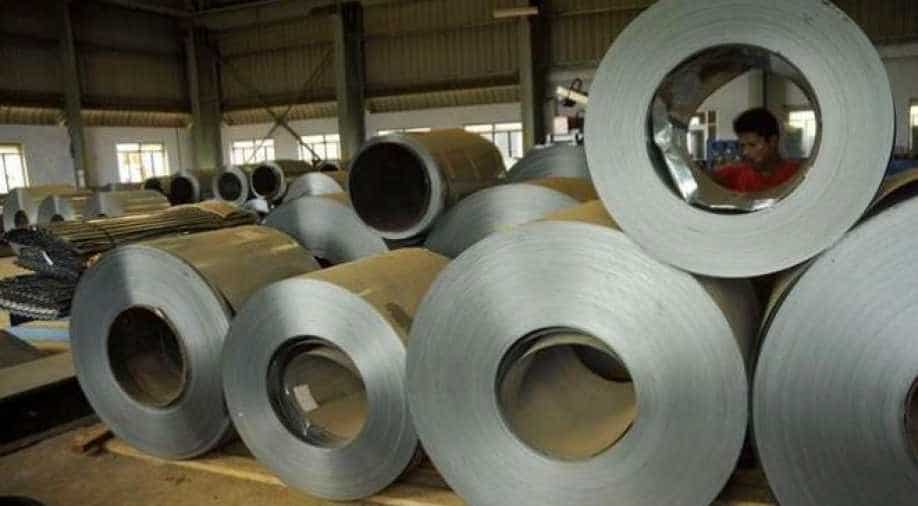 The import of aluminium scrap grew 19 per cent to 3,45,000 tonnes during the quarter ended September, from 2,90,000 tonne in the year-ago-period. Photograph:( Reuters )

The import of aluminium scrap had stood at 541,000 tonne during April-September period of financial year 2017-18, the Aluminium Association of India (AAI) said in a statement.

India’s aluminium scrap import jumped 21.44 per cent to 6,57,000 tonnes during the first half of the ongoing fiscal, industry body AAI said while urging the government to impose higher import duty on the metal to protect domestic players.

The import of aluminium scrap had stood at 541,000 tonnes during April-September period of the financial year 2017-18, the Aluminium Association of India (AAI) said in a statement. In July, the association said, it had already apprised the Department of Industrial Policy and Promotion (DIPP) of the situation which could arise in future.

An AAI delegation had urged the government to increase the duty on imports of aluminium scrap, saying the domestic players may become a victim of escalating trade war between the US and China. In the first quarter of the current financial year, aluminium scrap import was at 3,12,000 tonnes, up 24 per cent from 2,51,000 tonnes in the April-June quarter of 2017-18 fiscal. The import of aluminium scrap grew 19 per cent to 3,45,000 tonnes during the quarter ended September, from 2,90,000 tonne in the year-ago period. “In both the quarters, there is a rise. The government must take immediate steps to restrict the import of low-quality scrap. It is a major threat posing the industry. Aluminium is required by industries like automobile, construction, consumer goods, etc which are on a growth trajectory in India. One can imagine the life of the products which is made up of substandard raw material,” an AAI official said in the statement.

“We have suggested an increase in the duty to 10 per cent on scrap from the current 2.5 per cent.” We also want quantitative restrictions to be put in place.” The association has also been demanding an increase in import duty on primary aluminium to 10 per cent from current 7.5 per cent. Aluminium is the only metal that has a differential duty structure for primary and scrap and this encourages large-scale dumping of the latter. Domestic aluminium making capacity is at 4 million tonnes per annum (MTPA) and the consumption is at 3.6 MT which industry is already producing.

As the demand will grow proportionately, the players would also ramp up their capacity and output, the association said in a statement. The AAI is the apex body representing the entire spectrum of Indian aluminium industry primary producers, downstream manufacturers, end users, R&D organisations.