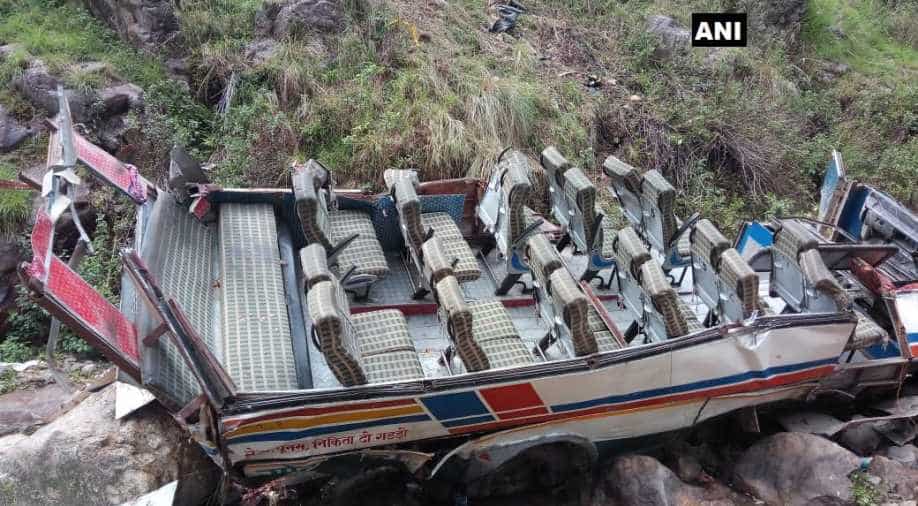 As many as 20 bodies have been recovered from the accident spot Photograph:( ANI )

The death toll in Nainidhanda accident rose to 47. 11 people have been injured in the accident where a bus fell down a gorge in Pauri Garhwal district's Nanidhanda earlier today.

The accident took place when the bus fell into a 60-metre gorge in Uttarakhand at about 9 am, near the Queens Bridge on the Pipli-Bhaun road when the driver lost control of the 28-seater bus which was headed to Ramnagar from Bhaun.

Eight injured people were rushed to nearby medical facilities. Of the injured, four were in "very critical" condition.

Meanwhile, Uttarakhand chief minister  Trivendra Singh Rawat announced a compensation of Rs 2 lakh to the next of kin of the dead. Treatment of injured will be taken care of by the government, appropriate compensation will also be given to the injured, he added.

A magisterial inquiry has been ordered into the accident, he further said.

Death toll in Nainidhanda accident rises to 47. 11 people have been injured in the accident where a bus fell down a gorge in Pauri Garhwal district's Nanidhanda earlier today. #Uttarakhand pic.twitter.com/7g63BqqKTv