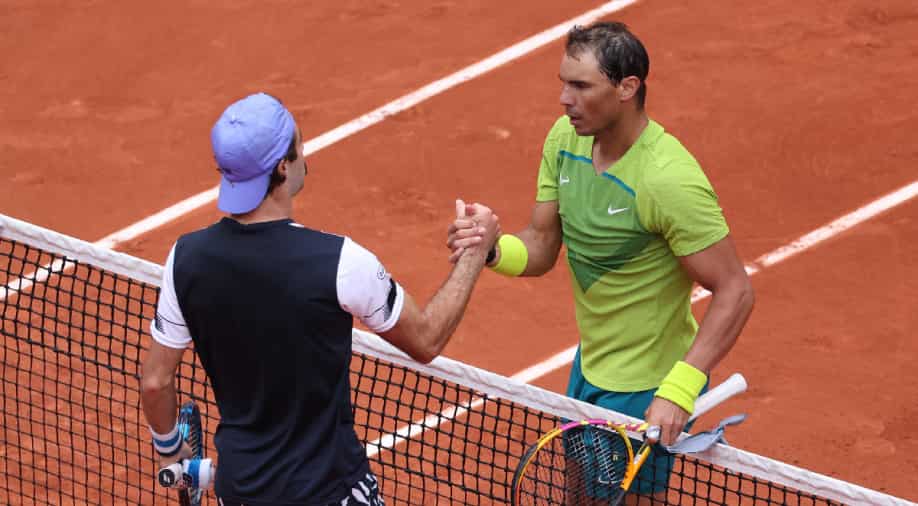 Rafael Nadal got off to a winning start in French Open 2022. Photograph:( AFP )

Rafael Nadal got his French Open 2022 campaign off to a brilliant start with a dominant win against Australian Jordan Thompson on Monday.

Rafael Nadal showed no signs of pain as the 13-time French Open champion marched into the second round at Roland Garros with clinical 6-2 6-2 6-2 demolition of Australian Jordan Thompson on Monday.

The Spaniard, who had never arrived in Paris as unprepared as this year after a rib injury and a chronic foot problem hampered the build-up to his beloved Grand Slam tournament, was never bothered on a chilly court Philippe Chatrier.

"It`s incredible for me to play here again on Chatrier. I`m happy with this win. First round is always special," said Nadal.

The 35-year-old, who has a record 21 men`s Grand Slam titles to his name, played down the chances of adding to his tally but his display was reminiscent of those of previous years.

Nadal broke for 2-1 with a backhand volley winner and his massive forehand helped him quickly move 4-1 up against an overwhelmed opponent.

The fifth seed looked to finish off some points quickly and made several unusual unforced errors, but they were of little consequence as he breezed through the opening set.

Nadal broke serve in the first game of the second set and again in the fifth and seventh as he started to play more neatly, bagging it with a service winner.

Thompson, who pulled a break back, looked completely worn out by then but managed to hold it together until 2-2, when Nadal broke with a forehand volley and won all the rest of the games.