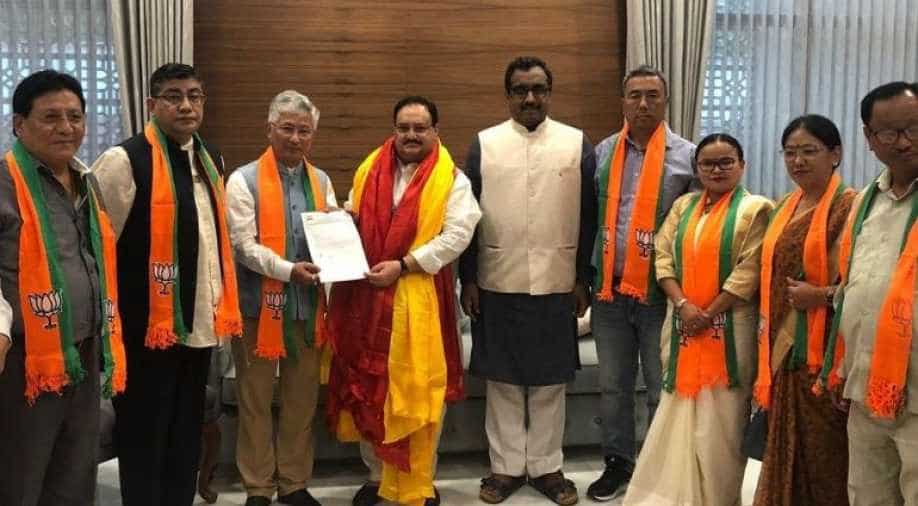 This comes as a major jolt to the SDF chief and former chief minister Pawan Kumar Chamling.

In a major boost to the Bharatiya Janata Party (BJP), ten MLAs of the Sikkim Democratic Front (SDF) on Tuesday joined the Saffron Party in presence of senior party leaders JP Nadda and Ram Madhav.

This is the first time that MLAs of a regional party in Sikkim have joined a national party. Ram Madhav welcomed the MLAs to the party and said BJP will play the role of a constructive opposition in the state.

Vowing to strengthen the BJP organisation in the state, Karma Sonam Lepcha said the youth of Sikkim are inclined towards Prime Minister Narendra Modi due to his "look east policy"."We want the BJP to bloom in Sikkim and would work hard at grass-root level. Young voters are with BJP," he said, hailing the Center's decision to abrogate Article 370 in Jammu and Kashmir

SDF MLAs crossover to the BJP comes as a major jolt to the party chief and former Sikkim chief minister Pawan Kumar Chamling. The party was founded by Chamling in 1993.

In the previous Assembly elections in the state, Sikkim Krantikari Morcha (SKM) had won 17 out of the 32 Assembly seats whereas the SDF had bagged 15 seats.