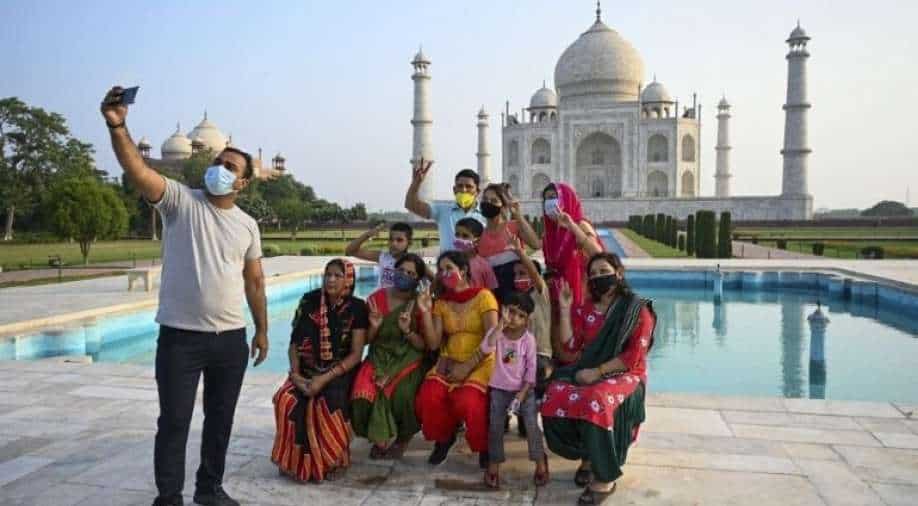 A group of tourists take souvenir photos at the Taj Mahal after it reopened to visitors following authorities easing Covid-19 coronavirus restrictions in Agra on June 16, 2021. Photograph:( AFP )

Infections and deaths soared to record levels in April and May, overwhelming health services in some places and prompting lockdowns and other curbs

Infections and deaths soared to record levels in April and May, overwhelming health services in some places and prompting lockdowns and other curbs.

Cases have declined in recent weeks, with several major cities including New Delhi and Mumbai easing many restrictions.

In Agra, where the Taj Mahal is located, tourist guides and shopkeepers were upbeat as India's top tourist attraction sprung back to life Wednesday.

The 17th-century monument of love built by Mughal emperor Shah Jahan was shut in March last year, reopened in September and closed again in April.

Crowds were thin on the first day of the reopening, with authorities restricting visitor numbers to 650 per day.

Covid-19 precautions meant visitors were not allowed to touch the shining marble mausoleum, but those making the pilgrimage to one of the New Seven Wonders of the World were still delighted.

"I am very glad I got to see it, it is amazing," gushed Brazilian visitor Melissa Dalla Rosa, 40.

"I cried when I first saw, oh my God... (it was) a very special experience," she told AFP.

Lucky Feizan, 20, a shopkeeper, said the lockdown had squeezed hard those dependent on the Taj Mahal for their livelihood.

"This (was) the second wave of Covid. (With a) third I am finished," he told AFP.

The total caseload now stands at almost 30 million with 380,000 deaths, although many experts say the true toll could be over a million.

Kerala, one of the worst-hit states, said Tuesday it will allow public transport to resume while Madhya Pradesh in central India permitted shopping malls and gyms to reopen.

Cases of a usually very rare but deadly infection known as mucormycosis, or "black fungus", in coronavirus patients have also declined in many areas.

The western state of Maharashtra still has more than 7,000 active cases, however, according to reports.

The rise in these fungal infections, contracted by several thousand people, has been blamed on the excessive use of steroids to treat Covid patients.