Socialism weds Mamata Banerjee reads the invitation: The names of these men have shot to popularity, thanks to the wedding invitation of their youngest brother - Socialism, who is a silversmith. The to-be bride's name has also caught people attention.

Even the most hardcore, popular Communist leaders in India have names that refer to Gods, but that’s not their fault. Their parents named them, after all!  Most of these leaders’ children too have normal-sounding names.

But, the Salem District Secretary of the Communist Party of India (CPI) has taken things to an all-new level. His three sons born after the 1990s have been named Communism, Leninism and Socialism, as a tribute to the erstwhile Soviet Union.

The names of these men have shot to popularity thanks to the wedding invitation of their youngest brother - Socialism, who is a silversmith. The to-be bride's name has also caught people attention - as the invitation reads Socialism weds Mamata Banerjee.

The bride’s family were Congress loyalists and hence on having a girl child about 20 years back, they named their daughter after the up and coming leader from West Bengal. Even though they are divergent by political ideology, the families of the bride and groom are closely related to each other. 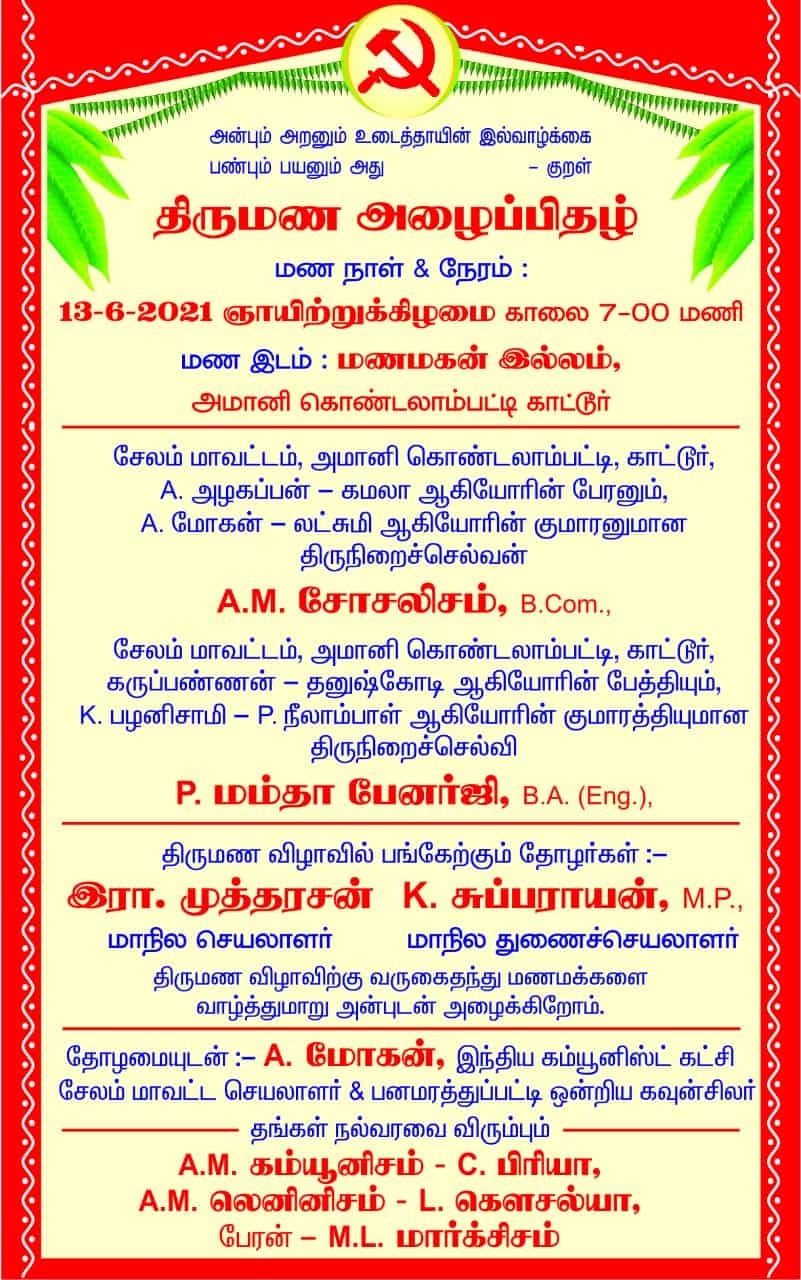 “Communism will be there till humanity is alive,” says Mohan, the proud father of three men. He says that such names might sound strange to the outside world, but their village had many people named after Soviet leaders and Socialist countries. How are Vietnam, Czechoslovakia, Russia, Romania etc. for a name? Their village AK Patti Kaattoor in Salem, Tamil Nadu has people that go by all of these names.

While Marx, Lenin and Stalin are names that are common to find, adding the ‘ism’ was the extra mile that Mohan travelled to prove his loyalty and admiration, but it was a costly choice. “Enrolling my boys in school was real trouble. Teachers were shell shocked and taken aback on hearing the names. As students, they were bullied by their peers and used to come back complaining to me. As they got into college, things got much better as the peers are fairly aware of the ideologies by then” the father recalls to Zee media.

Mohan recalls that a Doctor refused to write the name of his youngest son Communism when he had to be admitted to a hospital as a three-year-old child. The ever staunch Communist in Mohan didn’t relent and admitted in son to a different hospital.

The wedding that is to take place on Sunday, June 13th is expected to witness only about 50 persons in attendance, owing to Covid-19 restrictions on gatherings. CPI State Secretary is among the leaders expected to grace the occasion. And there’s a special young guest too - Marxism, Mohan’s grandson.

For Socialism, the bridegroom-to-be, it's an overwhelming experience that the brothers’ names have gotten so popular. “It's really surprising and fulfilling at the same time,” he tells Zee Media. When asked if his wife would follow the tradition of keeping his name as a suffix, he laughs - “Mamata Banerjee Socialism” it will be.