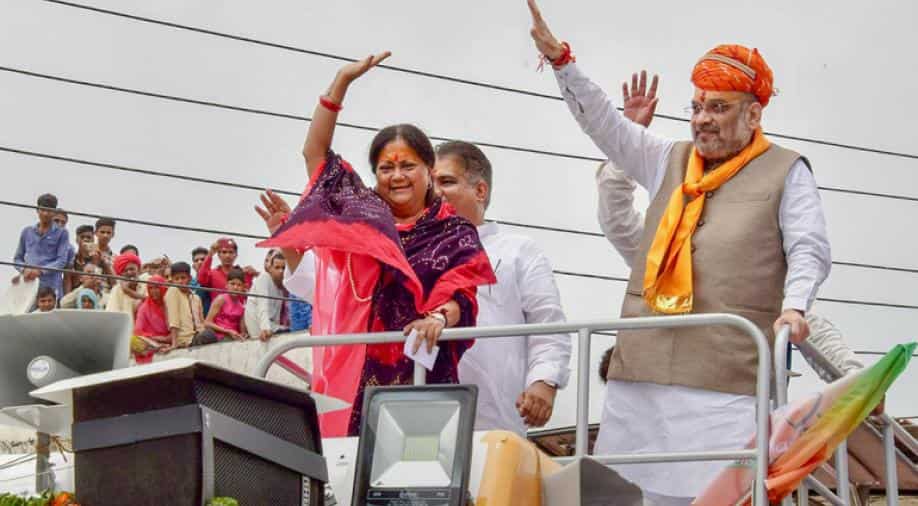 BJP president Amit Shah flagged off Chief Minister Vasundhara Raje's pre-poll tour 'Rajasthan Gaurav Yatra' on Saturday and tore into the opposition Congress over alleged lack of development in the state under its rule.

Flagging off the 58-day yatra, aimed at seeking people's mandate in the Assembly elections scheduled to be held later this year, from the Charbhujanath temple in Rajsamand district, Shah launched a scathing attack on Congress president Rahul Gandhi.

Raje and Shah offered prayers at the temple before the chief minister boarded the specially designed bus with the party president.

They left for a helipad nearby to head to Kankroli city in the district to address the first meeting of the tour. The 'rath' will reach Kankroli by road and will be used by Raje for her onward journey.

The 'Rajasthan Gaurav Yatra' will cover 165 of the total 200 assembly constituencies in the state before its culmination on September 30 in Ajmer.

Speaking at the first public meeting, Shah said 'Rahul Baba' should go and see the villages where no development had taken place in the 50 years of the Congress rule.

But the situation has changed under the BJP rule and now development works are happening there.

Shah said that the Narendra Modi government released two-and-a-half-times more funds to the state government as compared to the previous UPA government.

"Congress president should tell the people whether illegal Bangladeshi should be in India or not. Congress is actually looking at vote bank in this issue but the Modi government does not run on the basis of vote bank," he said.

Shah also said that BJP did not dilute the SC/ST Act and instead the BJP government has strengthened it.

He said that the Modi government wants to give statutory status to the OBC Commission.

"When Rahul Baba comes to Rajasthan, ask him whether the Congress will support the bill in Rajya Sabha or not," he said.

The bill to give the statutory status to the National Commission for Backward Classes was passed by Lok Sabha on Thursday.

Talking about the schemes and programmes of the government, Shah said that the Modi government brought 116 schemes for people and the Raje government has touched upon all sections of the society in the state and carried out developmental works.

"Congress did nothing for development. Rajasthan which has been a glorious state became a 'Bimaru' state because of Congress but now under the leadership of Raje, the state is progressing and going to become a developed state. We have committed to form the government again," he said.

He asked people to vote for the party to make Vasundhra Raje the chief minister of Rajasthan again in the Assembly elections and Narendra Modi as prime minister in the 2019 Lok Sabha elections.

Raje said that it was her third yatra and exuded confidence that the party will secure victory again.

"Five years back, I had begun Suraj Sankalp Yatra and Parivartan Yatra in 2003 from here and people gave us their mandate. We worked hard, I conducted visits and tours of the state to know people's problems and provided them with what they wanted," Raje said.

She said that the government launched programmes and worked to enhance the dignity of women by launching schemes such as Bhamashah scheme and others.

"Congress always tried to create a rift among castes but we want to take every section along with us. It is our aim to launch public welfare schemes and transfer the benefit to people. Development works have taken place in the last four years in every panchayat and district,",? she said.

She said that the state is no more a Bimaru state. In the coming years, she said, industries will be set up, development will pick up the pace for a progressive Rajasthan.

"There is a need to end 'One time Congress, one-time BJP' trend to push Rajasthan among fastest developing states. Development took place at a fast pace in Madhya Pradesh, Chhattisgarh and Gujarat where the BJP is in power," the chief minister said in the public meeting.

She also asked the Congress to give a list of works done by them in the past 50 years. "People should analyse who served the nation best," she said.

Home minister Gulab Chand Kataria, who is the convener of the yatra, hailed the prime minister saying he has worked for the nation, brought honour for the country globally.

"He has worked for poor, women, youths and those in need," Kataria said in the meeting attended by a large number of people.

Higher Education Minister Kiran Maheshwari said that the party chief gave a message of 'Ajay (invincible) Rajasthan-Ajay BJP', saying the 'Gaurav Yatra' will turn into the 'Vijay (victory) Yatra' of the BJP in Rajasthan.