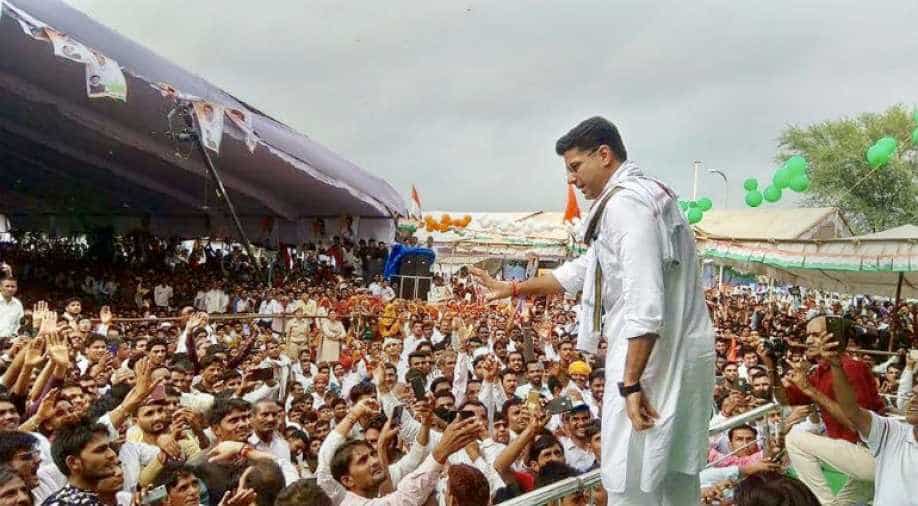 It is an important election and there is a wave for the Congress across the state, said Pilot.

Rajasthan Congress chief Sachin Pilot said on Monday that the Assembly election in the state is a fight between the ideologies of his party and the BJP.

After filing his nomination from the Tonk assembly seat, Pilot said the Congress would not only win the election in Tonk, but also the entire state with a sizeable margin.

"The Bharatiya Janata Party (BJP) has deceived the people and its report card is in front of the people. There is resentment among the people and they are waiting to vote for the Congress," Pilot said.

It is an important election and there is a wave for the Congress across the state, said Pilot, chief of the party's Rajasthan unit.

Pilot's rival candidate, Yoonus Khan, who is the only Muslim candidate pitted in the election by the saffron party, also filed his nomination on Monday.

"I would not like to comment on caste and religion. I have seen tension on Sachin Pilot's face. We both have come to Tonk for the first time as election nominees," Khan said, adding that he had always accepted his party's decision and was ready to work for the party anywhere in the country.

Khan said he had done various developmental works in Tonk district as a public works department minister in the last five years and the development would remain the issue for him and his party in the upcoming election.

Earlier in the day, the BJP released its fifth list of six candidates, fielding Khan against Pilot in the Muslim-dominated Tonk Assembly constituency by replacing sitting MLA Ajit Singh Mehta.

After the Congress fielded Pilot in Tonk, the BJP did brainstorming and replaced Mehta, who figured in the first list issued last week.

Khan is a sitting MLA from Deedwana constituency of Nagaur district and his name was kept reserved by the party till the last moment.

The state will go to polls on December 7.