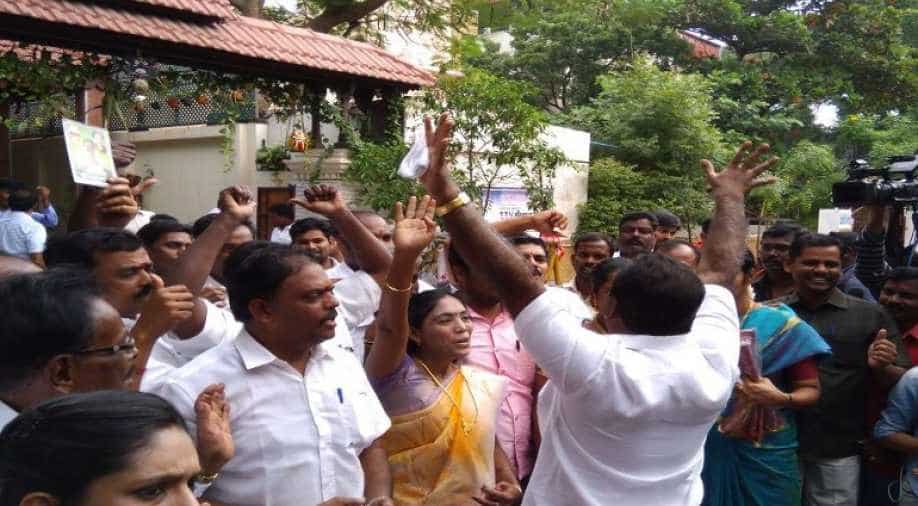 The RK Nagar by-elections were held on Thursday, with voter turnout recorded at 77.68 per cent. The election commission said the turnout was the highest figure since 2011 Photograph: ANI

I am an independent candidate for namesake but all Party (AIADMK) workers are with me. I also have Amma's wishes: TTV Dhinakaran in #Chennai pic.twitter.com/VqF9cvM0qx

Official EC trends: TTV Dhinakaran continues to lead with 5447 votes, AIADMKs E Madhusudhanan has got 2512 votes and DMK's N Marudhu Ganesh has got 1367 votes at the end of counting round 3

Counting halted for about 15 minutes after clash between AIADMK and Dhinakaran supporters at counting centre, later resumed.

The counting of votes in the RK Nagar bypoll began at 8 am Sunday morning.

RK Nagar is seen as not only politically symbolic but also as a litmus test for the ruling AIADMK.

This is where five-time former chief minister Jayalalithaa won her last two elections from, which is why the ruling AIADMK will be keen to retain it.

The seat fell vacant after her death last year.

The bypoll is also being seen as a litmus test for the minority AIADMK government, with commentators saying the psychological fallout of a loss could affect it.

The bypoll this time is a three-way contest between the AIADMK's E Madhusudhanan, rebel AIADMK leader TTV Dhinakaran who is fighting as an independent candidate, and the opposition DMK's N Maruthu Ganesh.

First reports are saying Dinakaran is in the lead.

The RK Nagar by-elections were held on Thursday, with voter turnout recorded at 77.68 per cent.

The election commission said the turnout was the highest figure since 2011.

The by-election was actually scheduled for April this year but was postponed after allegations surfaced of voters being bribed.