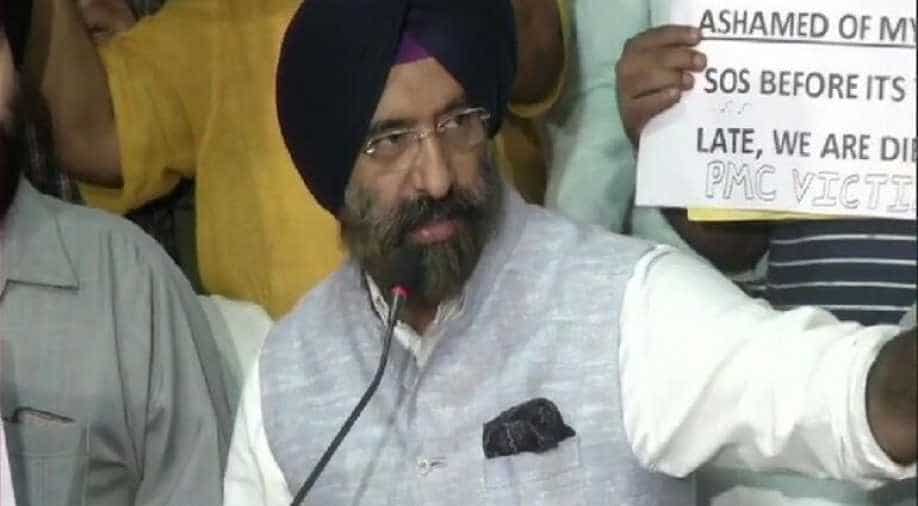 Sirsa speaking at a conference in Delhi. Photograph:( ANI )

He also demanded that all assets of the promoters of HDIL - Rakesh and Sarang Wadhawan - should be frozen.

Shiromani Akali Dal (SAD) on Monday demanded that the Reserve Bank of India (RBI) should take over the operations of the Punjab and Maharashtra Co-operative Bank (PMCB) and the money of account holders should be given back to them.

While talking to media persons here, SAD leader Manjinder Singh Sirsa said: "We have three demands: The operations of PMC Bank should be taken over by the RBI.

''The account holders should be informed about their money. There should be no sanctions on the withdrawal of money from the accounts", he said. He also demanded that all assets of the promoters of HDIL - Rakesh and Sarang Wadhawan - should be frozen.

"The money in PMC Bank belonged to the people. Rolls Royce and Bentley cars were purchased by Wadhawan. We request that our demands should be met and money is returned", he said.

Sirsa said that the people have not given money to a chit fund or a finance company but to the PMC Bank, which is governed by the RBI.

He said that 74 per cent of the money of the bank was given to one company HDIL as loans.

"Wadhawan and his son used that money for purchasing jets, and luxury cars. We want our money bank," he said.

Commenting about the PMC Bank, Sirsa said: "It is a cooperative bank but is governed by the RBI. All its formats are decided by the RBI. Therefore, the responsibility lies with the RBI."