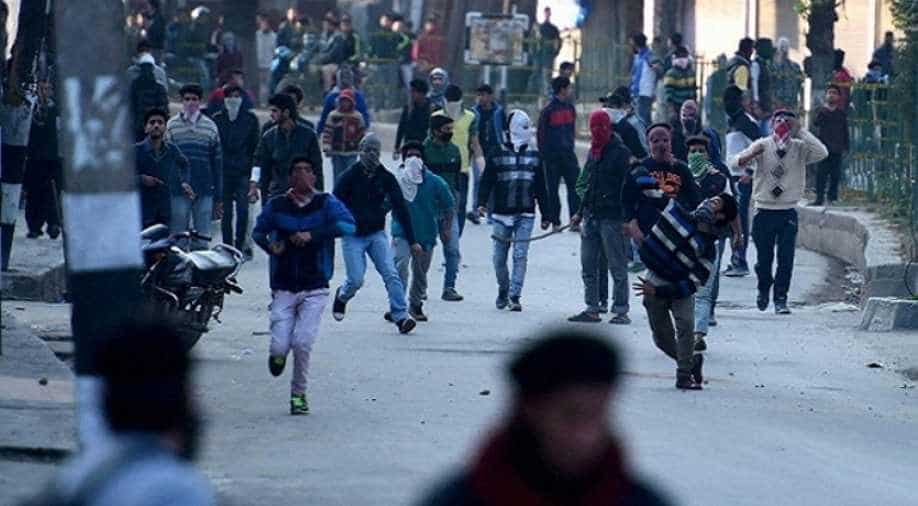 A security forces vehicle was passing at the time. Security forces claimed the protesters tried to stop the vehicle and then got violent. (Representative image) Photograph:( Zee News Network )

The Central government of India's decision to appoint Dineshwar Sharma, former IB Director, for holding talks with Kashmir may have come as a surprise to many but not for Kashmir watchers. The reality was written on the wall. It had to happen.

Despite tough measures taken by the Centre against foreign funds, bumping-off of high-value terrorists, the valley remained unsettled and out of control. Despite the complete support of the Centre to the Army, the message from the ground to the government was clear that New Delhi cannot escape dialogue. It was aired by the Army and bureaucracy.

So, the announcement should be welcomed because it is a good and a moral step. Dineshwar Sharma will enjoy the status of a Cabinet Secretary and will have the mandate to speak to all in the valley. It will open up a possibility for the government to engage those who have already been painted anti-national by a rancid discourse where nationalism was being used as a bat to hit anyone who felt otherwise in Kashmir.

The appointment of an interlocutor also confirms that Kashmir will be granted some exceptions, and the acknowledgment of the exceptionalism may pave the route for a normal valley. Though every problem in Kashmir cannot be heaped on the foot of PDP-BJP’s door, the fact remains that the strong national discourse along pro-Indian and anti-Indian lines had snatched political elbow room from BJP. The strength of the party had become its biggest disability. Despite the fact that it wanted to reach out, it could not because of the community voters BJP has ended up cultivating post-2014. It is in this context this appointment must be seen.

Even if we leave aside Hurriyat which has been flirting with Pakistan and fueling unrest, the strong approach has marginalised the mainstream parties like the PDP and the NC. The sustained dialogue will create a window of opportunity for mainstream and democratic setups like PDP and NC, helping them to buffer themselves from the violence which civil society has heaped on its doorsteps.

It is not without reason that PDP workers are being killed regularly. This will also give a face-saving window to Mufti who has been battling Kashmir alone. It is also not without significance that this announcement has come within 48 hours of Mufti’s absence at an official function last minute. Nonetheless, the process will allow restive rural areas to have an ordinary schedule. It is this restiveness and violence at every nook and corner which has been BJP’s headache.

Many in the government would argue that BJP was already committed to the talks but the truth is that it couldn’t have been seen speaking to those who have already been branded anti-state. Dineshwar Sharma will have to escape this binary. Kashmir cannot become a casualty of liberal vs nationalist debate. He will have to walk a tightrope. The injustice done to the Kashmiri Pandits cannot be pushed under the carpet. Pandits also need a closure; they feel tightly glued to the current narrative. The valley needs to come to a normal.

Kashmir has a unique place in the Indian constitution and history has to be accepted by all. Kashmir resents any change to its status. They don’t see it as an integration but an intrusion. It is a fact and people from other parts need to understand it. India is not only an amalgamation of boundaries. It is an amalgamation of ideas and people. Kashmir stands as an example of it. The only hope is that unlike previous dispensations, the Centre doesn’t sit on the recommendations. The talks must have a fruitful end as talks without purpose only fuel even more vicious cycle of violence. Kashmir will always remain part of India and not an inch would be ceded but at the end, Kashmiris are also Indians. This message needs to be loud and clear.

Now, the time has come for the various Kashmiri political and social organisations to respond to this overture.