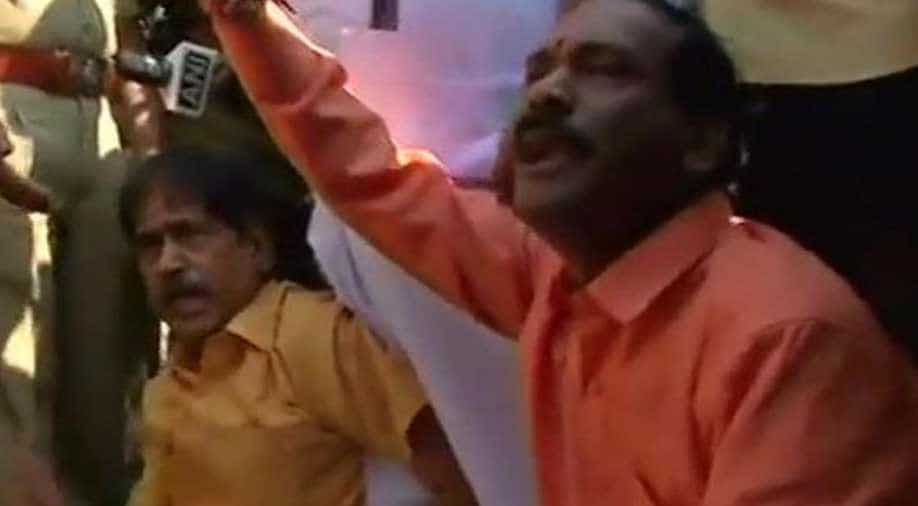 Three BJP MLAs in Puducherry were allegedly denied entry in the Puducherry Legislative assembly by the speaker following which they staged a protest outside the assembly. Contrary to the speaker, MLAs V Saminathan, KG Shankar and S Selvaganapathy claim that their entry to the assembly is constitutional. MLA S Selvaganapathy said " Now the judgement has come. It's clearly stated that the nomination is as per the constitution. So now we are eligible to enter the assembly. The speaker is a seasoned politician, he knows the judgement but he is acting on his own Responding to the BJP MLAs, the speaker of the assembly said that he will scrutinise the High Court's order and will decide on the status of the three MLA soon. He added that the High Court had pronounced the decision without consulting him. He said "I should be given an opportunity of 'Being Heard'.I was neither heard nor made a party in writ petitions. Principles of natural justice haven't been followed. I am scrutinizing High Court's order and will give my decision shortly".

Three nominated BJP MLAs V Saminathan, KG Shankar and S Selvaganapathy protest outside Puducherry Legislative Assembly after they were allegedly stopped by the speaker from entering the assembly. pic.twitter.com/tUJ51M3MIt

While Lt Governor of Puducherry Kiran Bedi said that the law will take its course.

Three nominated BJP MLAs V Saminathan, KG Shankar and S Selvaganapathy protest outside Puducherry Legislative Assembly after they were allegedly stopped by the speaker from entering the assembly. pic.twitter.com/tUJ51M3MIt

The three MLAs were appointed by the Lt Governor Kiran Bedi. The nominations of the MLAs had created controversy as the two MLAs were from BJP and the third was pro-BJP educationalist. Following this, the government sought to quash the recommendations of the Lt Governor arguing that they were not consulted for the nomination. The Madras High Court had however upheld the appointment of the three MLAs in March 2017. The speaker refuses to accept the decision of the High Court saying that "the "principles of natural justice was not followed" in upholding the appointment of the MLAs.