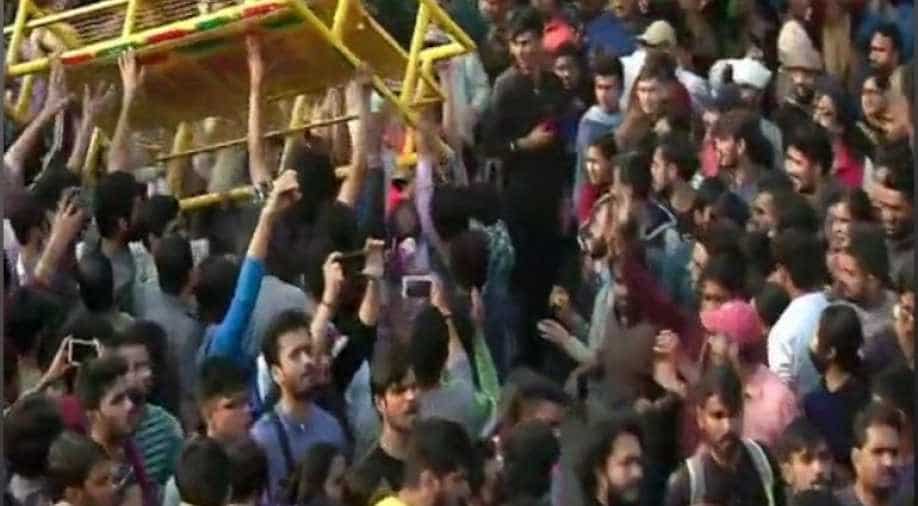 A scuffle broke out between students and police during a protest organised by Jawaharlal Nehru Students' Union (JNUSU) over fee hike and some other decisions of the university administration.

Hundreds of students took part in the protest against "massive fee hike" and the new hostel manual which also includes provisions on dress code and curfew timings. They raised slogans against the university administration and the government.

The protest turned out into a scuffle outside the All India Council for Technical Education (AICTE) auditorium where Vice President Venkaiah Naidu addressed the third annual convocation. The students removed a barricade and came face to face with police.

Police tried to push back students who refused to move away from gates. Women police personnel were also present who were seen pushing the protesting girl students.

Earlier, hundreds of JNU students carried out a march from 'Freedom Square' to AICTE Auditorium with banners against the 'massive fee hike'.
The protesting students raised slogans against the police and Union Home Minister.

"The administration is not taking the students' concern into consideration. The Vice-Chancellor has clearly refused to arrange even a single meeting with the students over the changes which have been unilaterally introduced," one of the protesting students told ANI.

"They are proposing a hike of the mess fees, and even the utility charges will be increased as per it. The students will be at the receiving end of it at multiple fronts, the students, therefore, are in a state of anguish right now," she said.

"I would urge the VC to look into the genuine concerns of the students and not treat it like a private university. Many of the students come here because it is affordable," she added.

Another student said that subsidies are provided so that the poor can also study at the varsity. "How will a poor student be able to study here if the hostel fee is over Rs 6,000 to Rs 7000," the student asked.

"You are resorting to violence. Please keep your protest peaceful," a police official was seen telling the protesters as a group of students removed police barricade.
The JNUSU has been protesting for about two weeks against the new hostel manual.

JNU Vice-Chancellor had on November 8 alleged that some students had kept Associate Dean Dr Vandana Mishra in illegal captivity as part of their protest.

According to JNUSU president Aishe Ghosh, the hostel fees have been increased and "curfew and dress restrictions" have been introduced in the university.