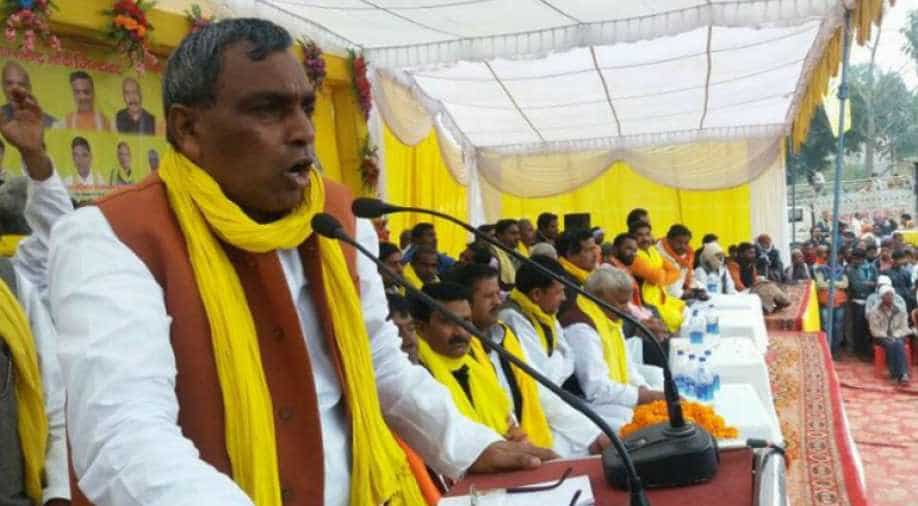 Protesters hurled tomatoes and eggs on Saturday at the home of Uttar Pradesh minister Om Prakash Rajbhar for saying that Rajputs and Yadavs consume more liquor than others.

Youths, some of them wearing red caps, mobbed the minister's official residence in Hazratganj area this afternoon, raising slogans and damaging his nameplate. Reacting to the minister's remarks, Samajwadi Party president Akhilesh Yadav tweeted, "It is people who use intoxicants, not any caste."

Rajbhar had made the controversial remarks in Varanasi on Friday while arguing against drinking.

While calling for a ban on alcohol in the state, Uttar Pradesh Minister and Suheldev Bharatiya Samaj Party (SBSP) chief Om Prakash Rajbhar said that people belonging to Rajput and Yadav caste consume more liquor than others.He further said that drinking alcohol is the"ancestral business" of both the castes.

Rajbhar, who heads the backward classes welfare portfolio in the UP Cabinet, is a leader of BJP ally, Suheldev Bharatiya Party.

He has courted controversy earlier with his criticism of the performance of the Yogi Adityanath government in the state.

In another controversial on drinking, he had said, "If someone offers you liquor, consume it but vote as per you discretion." Police said nobody has been detained yet over the protests at the minister's home.

"We are probing the matter," an officer said.