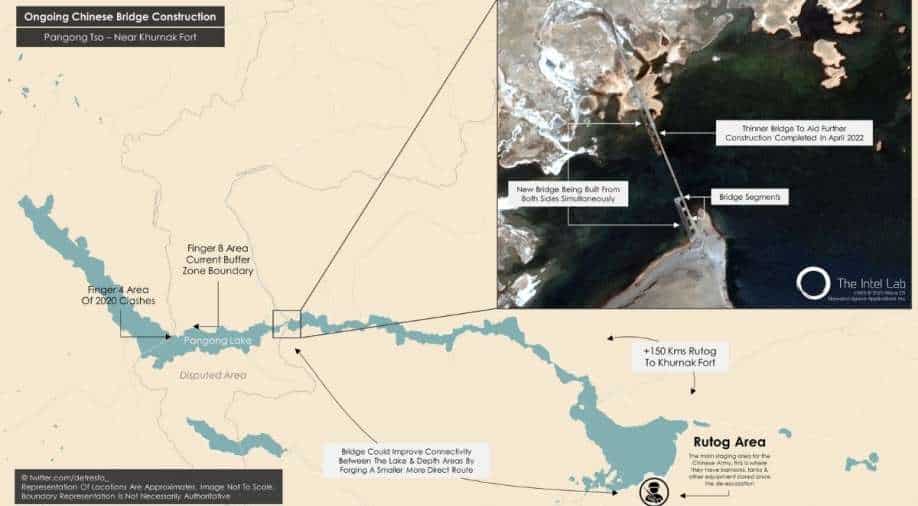 MEA spokesperson Arindam Bagchi said that the area where the reported construction is being undertaken has been considered an "occupied area" by India for decades. Photograph:( Twitter )

Responding to questions on this at the weekly press interaction, MEA Spokesperson Arindam Bagchi said, “We have seen media reports on a new bridge or expansion of old ones. This is a military issue so I can’t discuss implications. But India has always believed this area is occupied territory. We continue to monitor such developments.”

The Indian Ministry of External Affairs (MEA) warned on Thursday that India is closely monitoring China's construction of a bridge on the Pangong Tso (lake) in eastern Ladakh, which is in "occupied territory." According to security sources, a broad bridge connecting both sides of the lake is currently under construction, which will significantly reduce the time it takes for the People's Liberation Army (PLA) to move troops and armoured vehicles, while a smaller bridge built earlier this year was intended to support construction of the main one.

Official sources stated the big bridge was just getting started, and the little bridge, which appeared on satellite photographs in January, was not a "permanent bridge" but a bailey bridge to support the main one's development.

"There is this issue of talks as well as the bridge. On the talks part of it, we have been pretty clear, we have been saying the same thing repeatedly, and we have had various rounds of conversations with the Chinese side at different levels diplomatic and military side," Bagchi said.He further said, "We have seen reports on this bridge or a second bridge... we are monitoring the situation. Of course, we always felt it was occupied...Talks on with the Chinese side."The MEA spokesperson also highlighted the talks between India and China at different levels, including during the visit of Chinese Foreign Minister Wang Yi in March."

#WATCH | We have seen reports on this bridge or a second bridge... we are monitoring the situation. Of course, we always felt it was occupied...Talks on with the Chinese side: MEA spox Arindam Bagchi on reports of another bridge at Pangong Lake pic.twitter.com/h3LcE0astU

"EAM conveyed our expectations to him... as EAM had said then, the friction and tensions that arise from China`s deployments since 2020 cannot be reconciled with a normal relationship between two neighbours, so we will continue to remain engaged with the Chinese side both at the diplomatic and military levels, to ensure that the directions given by the two ministers are implemented fully," Bagchi said.

The MEA spokesperson said he would not be able to discuss the matter from a military standpoint and that the Ministry of Defence would be in a better position to address the ramifications. Following a spike in tensions along the Line of Actual Control (LAC) in the summer of 2020, notably in Pangong Tso, India and China held 15 rounds of disengagement negotiations to alleviate the situation.